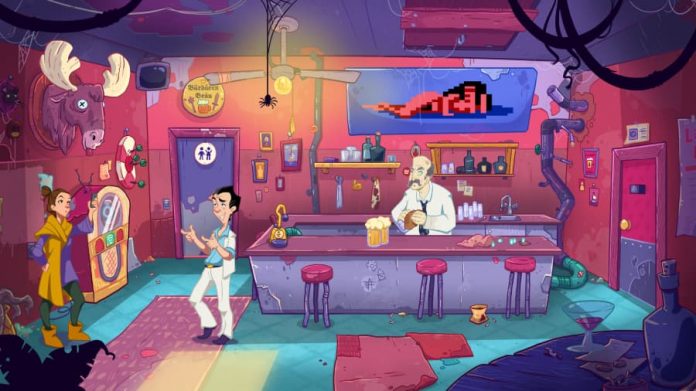 The Bundy family dog is named what? Which organisation disbanded on April 20, 1998? In which super hero movie did the protagonist’s costume suddenly sprout prominent nipples?

If you can’t answer four questions like these, then you can’t even play Leisure Suit Larry: Wet Dreams Don’t Dry.

Perhaps it’s meant to be humorous having to prove your age by answer a sequence of multiple choice questions before being able to start the game, but it just rubbed me up the wrong way. I mean, I’m 35 years old and had no idea what some of the answers were; God help someone younger. Well, Google will help I suppose. Also, I later realised you can skip the process by pressing the + button. The truth is, though, is that those questions are nothing compared to Leisure Suit Larry: Wet Dreams Don’t Dry‘s obscure puzzles.

Seemingly ignoring that the awful 3D games ever happened, Leisure Suit Larry: Wet Dreams Don’t Dry takes the series back to traditional 2D point and click territory. The ever-hopeful Larry Laffer wakes up in a dark and dingy hole, though something seems amiss. It’s only when he emerges and discovers Lefty’s bar that he comes to realise that he’s been missing for about 30 years. And in that time, dating has very much changed. 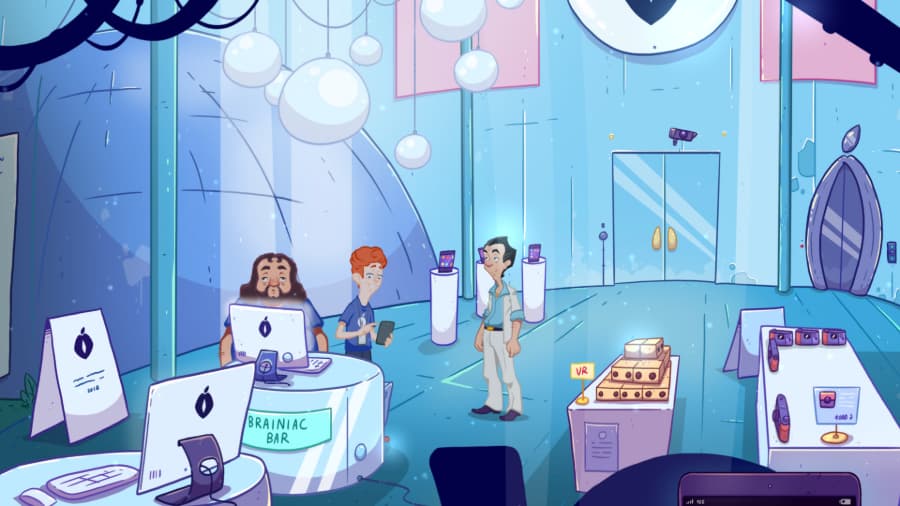 After a promising start which has Larry finding a prototype phone made by Prune, Leisure Suit Larry: Wet Dreams Don’t Dry‘s story quickly loses focus. As a creature of habit, Larry just wants to get his end away, and his advances are always taken advantage of. You’ll meet multiple potential conquests on your adventure, and they’ll have you travelling here, there and everywhere to complete tasks for them, often at the same time. It’s unfocused, and ultimately makes the game feel tedious. You can only move between locations so many times searching for the one item or clue that will allow you to progress before you just get fed up of the legwork.

Leisure Suit Larry: Wet Dreams Don’t Dry plays like your typical point and click game. Its only USP is a liberal helping of smut. You explore environments, pick up items, talk to people, and try to solve puzzles. Often those puzzles involve combining items before using them. Unfortunately the game falls into the trap of making many of its puzzles overly obscure, eventually leading to you trying to use every possible item you can on a problem in order to it. Often you’ll be amazed what the solution was.

On Switch, buttons must be used to move Larry around the screen and interact with objects and people when played in docked mode. The touchscreen can be used when playing in handheld mode though, but it’s a bit problematic. While tapping on something to interact with it is much more intuitive, it makes using the inventory less so. Selecting dialogue options using the touchscreen is also troublesome, as quite often the game just doesn’t seem to register your taps. You’ll probably find yourself using the buttons regardless of the way you play eventually, as it’s just easier. 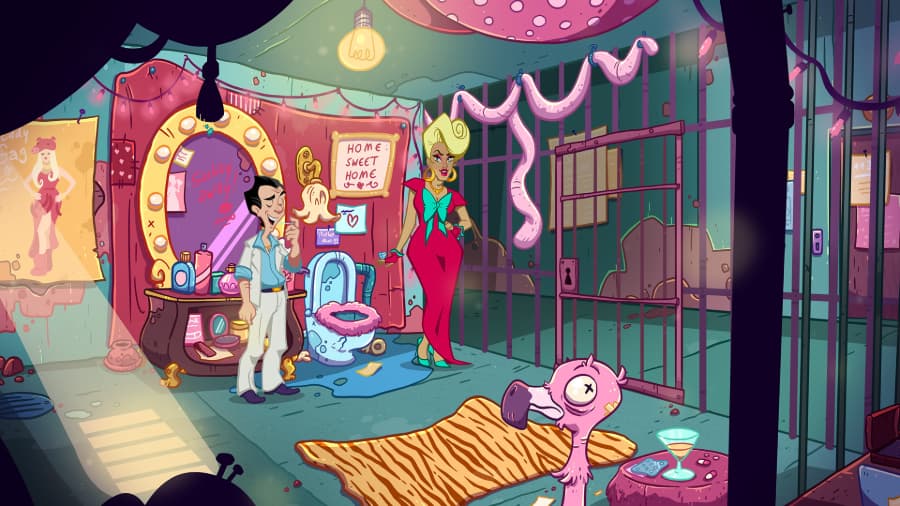 But even once you’ve got to grips with Leisure Suit Larry: Wet Dreams Don’t Dry‘s controls, you probably won’t find yourself having a whale of a time. Most of the game’s jokes just aren’t funny at all. They feel too forced, and at times are very immature. From the made-up names such as Unter, Farcebook and Timber, which I’m sure you’re quickly able to guess what they’re poking fun at, to the sometimes cringeworthy dialogue, Leisure Suit Larry: Wet Dreams Don’t Dry just tries too hard to make itself relevant and fails.

As a silver lining, the game really does look great though. Characters are varied and environments are detailed. It’s a colourful game that really pops. Voice acting is good too, though the accompanying subtitles are full of errors. If only the puzzles and writing matched up to the game’s presentation, then it’d probably be rather entertaining.

If you’re desperate for a sleazy point and click adventure on Switch, you might get some enjoyment out of Leisure Suit Larry: Wet Dreams Don’t Dry. It’s certainly not unplayable. But as point and click games go, its lack of a compelling story and poor puzzles relegate it to the bargain bin. Larry Laffer may be back, but he’s going to need better moves if he wants to attract the attention of 21st century gamers. You can only ride the coattails of past success for so long.