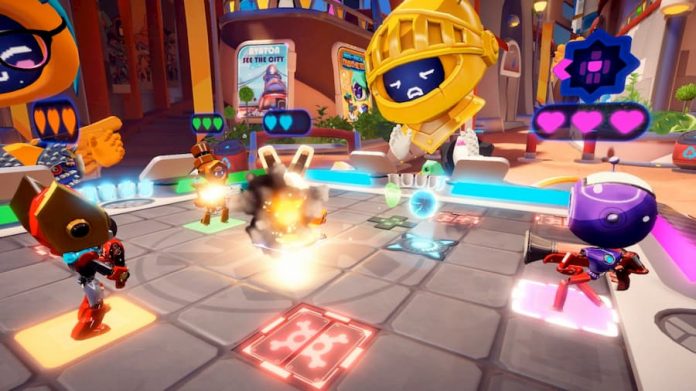 With a colourful board at your fingertips, PSVR exclusive Mini-Mech Mayhem puts tabletop carnage and strategy right in front of your eyes.

Much like rail shooters and aerial combat games, the tabletop genre fits nicely into the world of VR. Surveying the battlefield in a virtual world allows for the same level of precision and planning as any tabletop strategy you might play on your coffee table.

Mini-Mech Mayhem is a bright, energetic, and vibrant game that requires patience, planning, and a little bit of luck. Though not the most polished strategy game you can find, it feels like it has the legs to stick around for a good while.

The subtle nuances of Mini-Mech Mayhem lie mostly in your understanding of the game mechanics. The basic necessities you need to understand to survive on the battlefield are laid out in great detail through the various tutorials, but the more you play, the more you uncover other mechanics and useful power-ups. For example, I inadvertently learned that you can shoot power orbs, which you primarily use to fuel your abilities. This is a handy thing to learn, as you can steal orbs from across the board, without committing to moving for them. 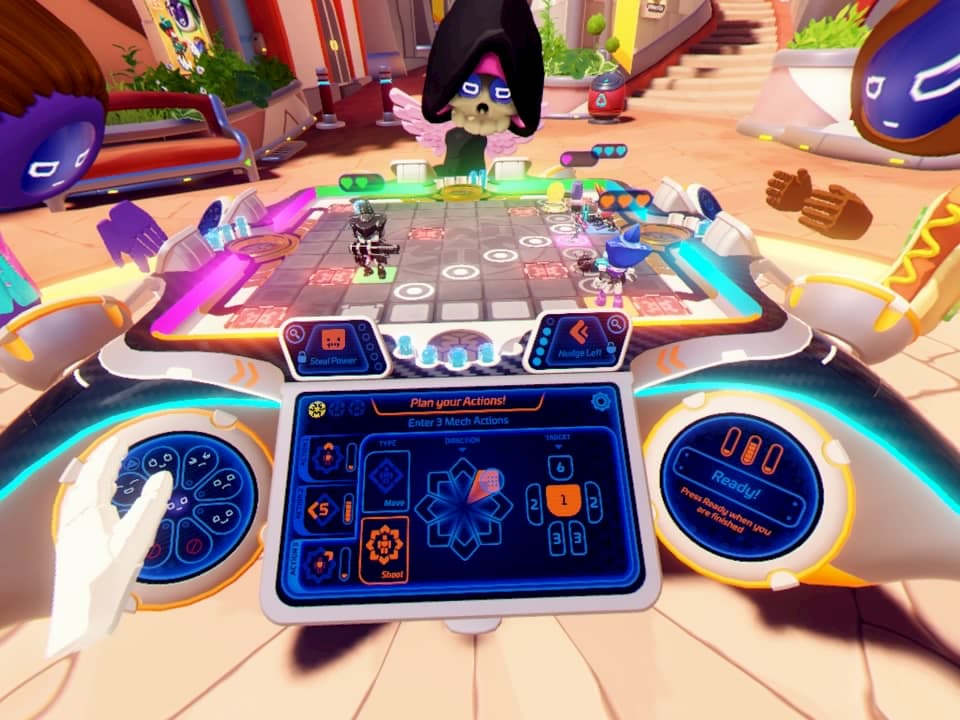 Each “turn” in the game is composed of three actions from each player. I like that you can go all-in on one action, but can’t put it all into a single direction. You can choose to spend all of your actions moving and not shooting at all, but you can’t move in the same direction more than once per turn. Moving can only be done six squares at a time, whereas shots can travel across the whole board in whatever direction. During moves, you can use certain power-ups, or Interceptors, to affect how your opponents shot or move takes place. Have them backpedal into a trap, change the direction of their shot, or steal a power-up from them. Mini-Mech Mayhem doesn’t overload the player with things to remember or keep track of, and the game is better for it.

Like most turn-based strategies, don’t expect Mini-Mech Mayhem to be over quickly. If you’re lucky and predict your opponents moves correctly, you can quickly end the game in just three turns by collecting the gold coin in each round. But even with careful planning and strategy, you are still under the lens of luck and RNG. The heavy reliance on Interceptor abilities can weigh the game down a bit, but never to a point of wanting to leave the board behind. 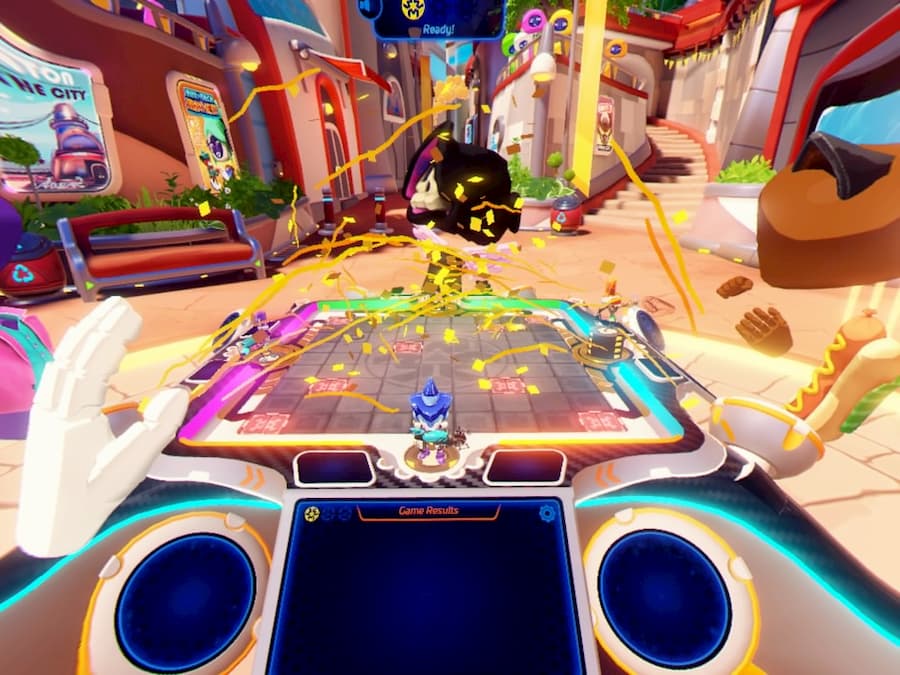 Mini-Mech Mayhem is undoubtedly made for you to enjoy with your friends. The AI players’ strategies tend to be pretty predictable, mixing in shots and moving (mostly) directly towards the gold coin. Higher difficulty opponents offer a bit more of a challenge, but still behave in a particular way. It’s a safe assumption that they’ll take strides to the goal, without thinking much about how you, their opponent, will counteract. In line with this, Mini-Mech Mayhem would benefit from some variation in game modes. Modifiers, different stages, certain goals to fulfil; adding more variety would remove the feeling of repetitiveness that can sink in with a game like this over time.

Those minor complaints aside, Mini-Mech Mayhem offers PSVR owners a fun, bright, and lighthearted strategy game to fill that niche in their VR library. It’s approachable, engaging and packs in plenty of charm. Avatar and mech customisation allow you to create a team that suits you. Hopefully developer FuturLab will continue to support the game by adding in new game modes. But even as it stands now, Mini-Mech Mayhem offers an accessible tabletop strategy game for newcomers, with a deep set of mechanics underneath for those willing to dive a little deeper.

Mini-Mech Mayhem is available on PS4.