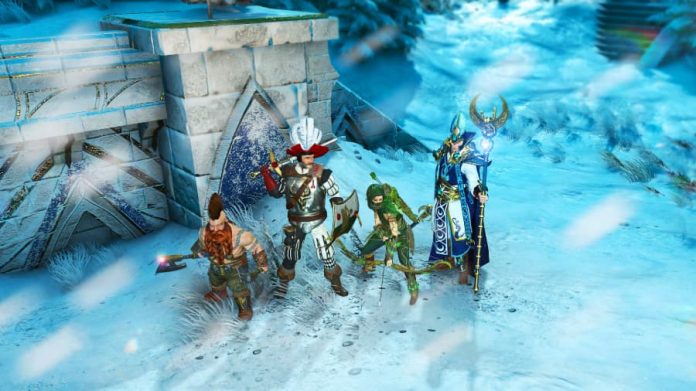 I always thought the high fantasy world of Games Workshop’s Warhammer would make perfect action RPG fodder. Chaosbane nearly proves that it does.

It has knights, dwarfs, rogues, mages and a whole host of demons and those who worship them. And with the best action RPG currently available being Diablo 3, is it any surprise that Warhammer: Chaosbane bears more than a passing resemblance to it? Not really. Though while it’s one of the better Diablo clones available, it falls short of the great game that has so obviously inspired it.

As one of four characters, Warhammer: Chaosbane has you hacking and slashing your way through four acts. Unlike Diablo 3 which gives you ample room to breathe as you make your way through its campaign however, here it feels like you’re pushed through them. Chaosbane‘s areas are rather linear, making each mission feel like a gauntlet rather than an adventure. And only once you’ve completed an act can you head out on a mission-free expedition just to gather some loot and hopefully gain a level or two.

There’s not much variety in each act, either. You’ll take on mission after mission, and more often than not you get a feeling of deja vu; the area you’re battling though is more than likely one you’ve bloodied before. Acts rarely offer more than two environments, which makes Warhammer: Chaosbane feel overly repetitive. It’s an issue compounded by a lack of enemy variety. In each act you’ll get used to defeating the same three or four enemies hundreds of times, with the odd big nasty thrown in that are shared between acts. 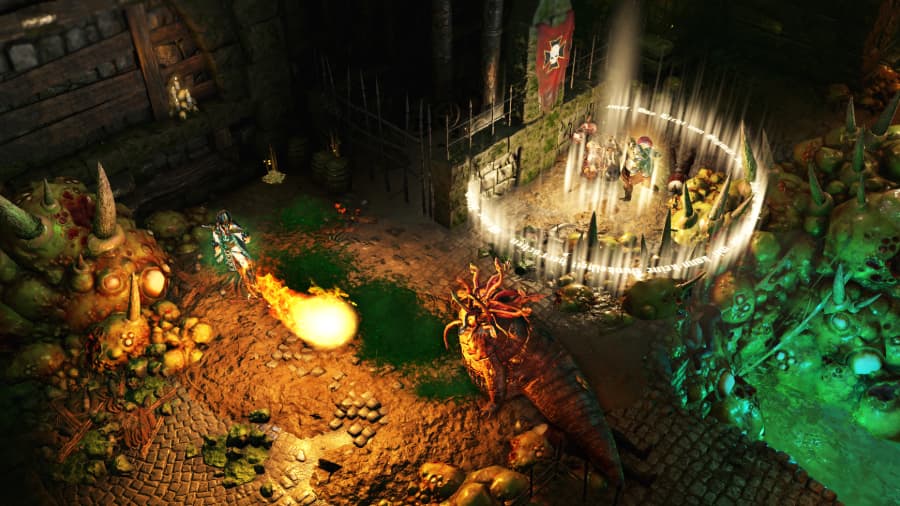 I never thought too many enemies could be an issue in a Diablo-like game, but it is in Warhammer: Chaosbane. Maps are full of them, and combined with the lack of variety, fighting them can become dull as you’re trying to make your way through the campaign. It slows the pace of the game down to a crawl, and doesn’t give you a chance to catch your breath. Random difficulty spikes add more frustration. You will occasionally find yourself suddenly outclassed, dying more often than you’d like. You then need to find better items, level up, or lower the difficulty to proceed. The game doesn’t make it very easy to do the first two unless you willing to return to a previous act and slowly grind your way to success.

And Warhammer: Chaosbane‘s problems don’t end there. As you progress through the game, new features open up but are never explained. An empowered state called Bloodlust, Blessing items to improve them, Gem fragment linking – these are features that you unlock as you play, but many will reach the end of the game without fully understanding them. Some features are just outright missing, too, like being able to buy and sell items. You collect Gold seemingly only to buy Relic Hunt maps once you’ve reached Warhammer: Chaosbane‘s endgame. 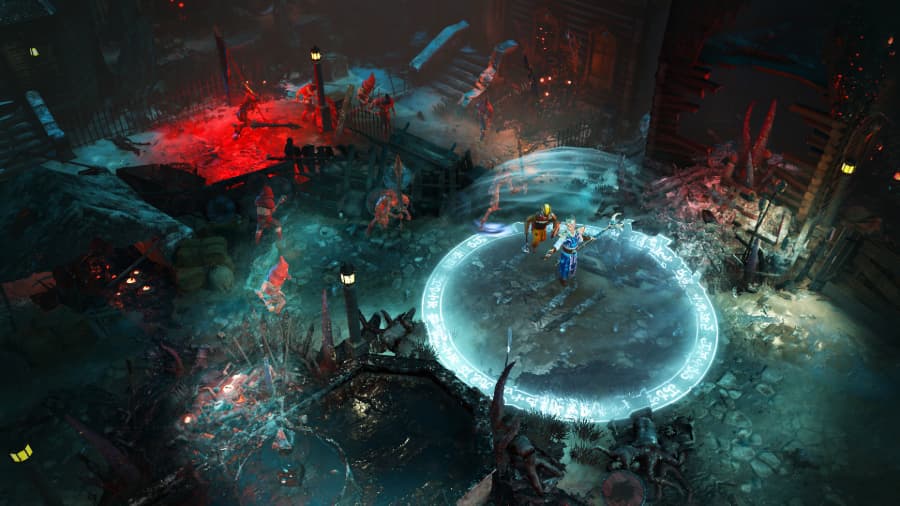 It’s not all bad though. Each character you can play as in Warhammer: Chaosbane has a wide variety of skills that unlock as you level up. And each one has three tiers, offering additional damage or benefits. You’re free to equip a selection of them that suits you, though you’re limited by the number of skills points you have available. Some generate resource when used, which enables the use of more powerful skills. Some buff your character and perhaps any others in your party. And passive skills can be equipped, too, providing benefits such as increased health, additional experience or more unique effects. There’s even a God Skill tree for further development. Needless to say, Warhammer: Choasbane offers plenty of scope for character builds.

Any characters you do create can be truly tested thanks to Warhammer: Chaosbane‘s impressive range of difficulty options. Beyond the usual easy, normal, hard, etc., there are also numerous Chaos difficulties. And just like in Diablo 3, the higher you go, the higher the chances of obtaining better loot. Thanks to local and online co-op, you can battle alongside others to improve your chances of victory. In fact, finishing the game’s campaign will be just the beginning of the fun for many. Much time can be spent doing Relic Hunts and Expeditions with others, free from the incessant dialogue found in the campaign. 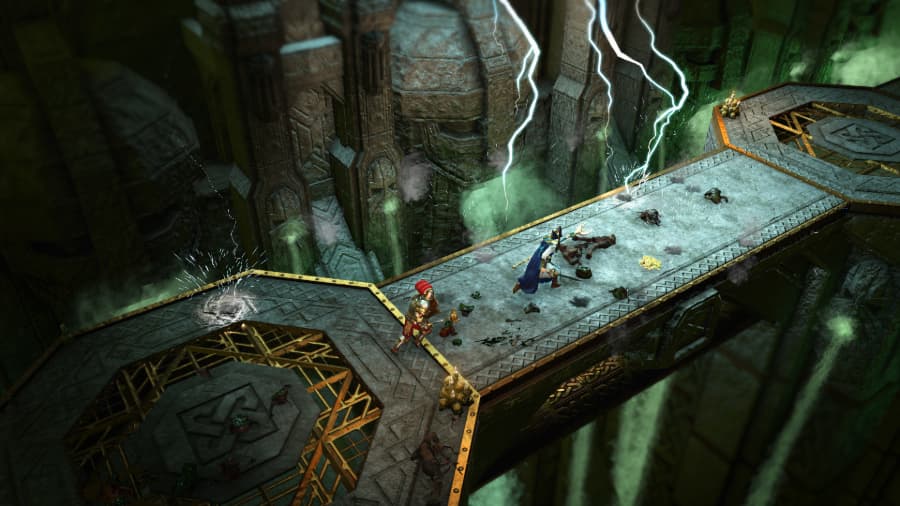 Those who pick up Warhammer: Chaosbane will find that it’s a nice looking game overall. Characters models and environments are detailed, and there are some decent effects on display. I’ve played the game on Xbox One X mostly, though while performance has generally been solid, I have noticed the odd bit of screen tearing. I’ve also tried the game on PC, and was surprised to find that there are no graphical options. You can change the resolution and toggle v-sync on and off and that’s about it. Still, at 4K resolution, Warhammer: Chaosbane looks great, and it mostly runs at a locked 60fps thanks to my RTX 2070. There’s just the odd drop when things get really hectic.

I’d by lying if I said that I haven’t been having some fun with Warhammer: Chaosbane, though it’s far from being a great game. The lack of enemy and level variety makes it feel like a slog at times, and the drip-feed of new features while failing to explain them is irritating. But the hard-hitting action and addictive character development go some way to make up for its issues. It’s enjoyable killing screens full of enemies like an unstoppable machine, then scouring the floor for loot that might just possibly make you even more powerful. And each character offers a wildly different experience, which can be further tailored by your selection of skills. It’s not perfect, but Warhammer: Chaosbane should entertain those seeking a new action RPG to sink their time into.

Warhammer: Chaosbane is available on PS4, Xbox One and PC. We reviewed the Xbox One version.