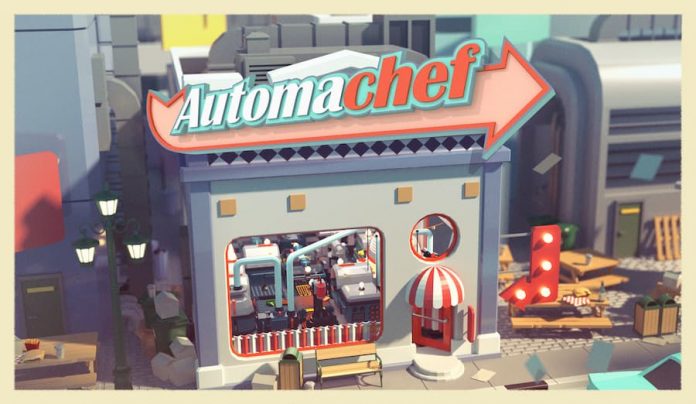 If you can get a robot-powered production line to cook your food, why would you ever bother doing it yourself?

Automachef, just released from developer Hermes Interactive and publisher Team17, is all about setting up fully automated, robotic restaurant kitchens to create a variety of dishes. You’ll need to place food dispensers, conveyor belts, grills, robotic arms and all kinds of technical gizmos in order for your kitchen to run smoothly. Building the best production line requires brainpower and ingenuity on your part, but seeing it all come together is highly rewarding.

Things start off fairly easy in Automachef. The campaign eases you in with a tutorial, and starts you off with easy recipes such as slapping a burger patty in a bread bun. What could possibly go wrong with that? It doesn’t stay simple for long, though. Before you’ve even fully familiarised yourself with how everything works, you’ll be juggling multiple recipes, building big, complex machines and attempting to serve food to dozens of hungry people.

Your early hours with Automachef will all be about trial and error. You’ll place a lot of machines, and then turn them on just to see what happens. When your robotic arms don’t pick up your sausages, leaving an accumulating pile on the end of your conveyor belt, it’s back to the drawing board. Finely-tuning your production line so everything actually works is just the start of the battle, however; to truly succeed at Automachef you’ll also have to work as efficiently as possible. That means wasting no electricity and wasting no food. 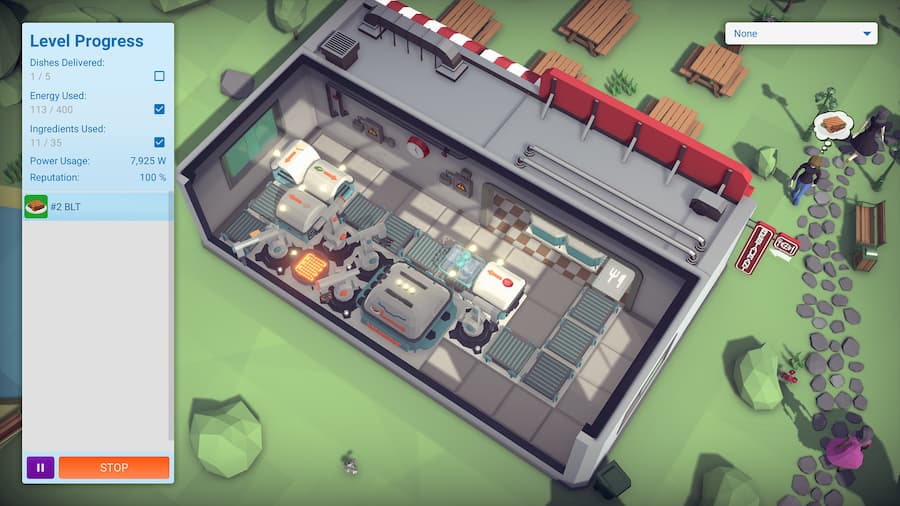 That means including further systems – order readers and computers – to provide extra instructions to all your machines. Having a dispenser continually churn out cheese isn’t much good unless someone’s placed an order for a cheeseburger, for instance. Playing in Automachef‘s campaign mode, if you use more ingredients than you need, you’ll fail the level. To begin with, you’ll need to carefully program order readers to control your machines. That means telling it to only dispense food once an order has been placed, and for grills to only power on when there’s an order being processed. Later into the game, that becomes even more complex, with computers you can program yourself with even more precision and control.

There are three game modes to tackle: there’s of course the Campaign, which offers a logical starting point that gradually introduces you to everything at pace. There are over 40 levels in the Campaign, which will take you a significant amount of time to work through. There’s also a Test Site, where all recipes and pieces of equipment are unlocked to allow your ingenuity to go wild. Perhaps the real highlight of Automachef, though, is its Contracts Mode.

Contracts Mode tasks you with creating your own company and, after giving you a modest starting budget, has you picking up various contracts to complete. The contracts vary in complexity, each having its own reward. Picking up and completing contracts allows you to earn money, and as you earn you’ll be able to spend it on unlocking new pieces of equipment. The overall goal is to grow your company’s reputation. Handily, you can choose the difficulty level of each contract. An easy contract gives a smaller payment, but has more lenient targets to reach. Harder contracts pay more, but require more food to be prepared and a higher efficiency rating to be met. 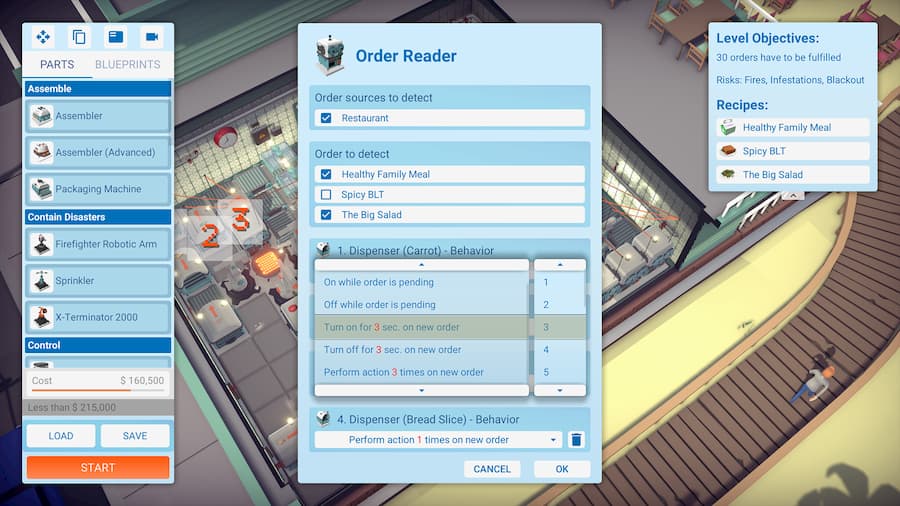 It takes some time to get used to all of Automachef’s systems, but once you do, seeing your complex kitchen system at work is incredibly rewarding. It’s even more rewarding if you manage to do it and achieve a good score for efficiency.

As you might guess, though, with so many different systems to configure, controlling Automachef can be a little fiddly. It’s available on PC and Nintendo Switch, and it definitely feels more suited to the mouse-controlled environment of the PC. The Switch controls aren’t terrible, but it doesn’t feel the most intuitive. It takes a little while to get used to, and even several hours into my time with the game I was still continually pressing the wrong buttons to perform basic tasks. It seems an oversight that touchscreen operation has been disabled in the game. I feel like being able to click the machine part you need to edit, or drag and drop systems into your production line, would be a much smoother way of doing things. Unfortunately, that’s not the case.

But it’s a small bugbear within a game that manages to be both fun and challenging. The type of gameplay that Automachef offers in’t going to be for everyone, but if you enjoy having to flex your brain a little, it offers a rewarding experience. It’s also a great entry point into basic programming. Perhaps playing on PC will offer a more intuitive experience, but the Switch version’s button controls aren’t enough of a barrier to stop Automachef being worthwhile to play.

Automachef is available on PC and Switch. We reviewed the Switch version.