If you’ve played The Witcher 3, you’ve probably spent some time playing GWENT, a card game that’s popular throughout its world. Did you know that you don’t need to boot up The Witcher 3 to play GWENT though? It’s available as a standalone free-to-play game in which you challenge actual human opponents. So, build the beck deck you can, brush up your skills and take on GWENT players around the world. There are worse ways to spend your time on PS4.

View GWENT: The Witcher Card Game on the PlayStation Store 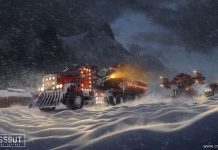 Crossout Adds a Sackload of Content in Holiday Update