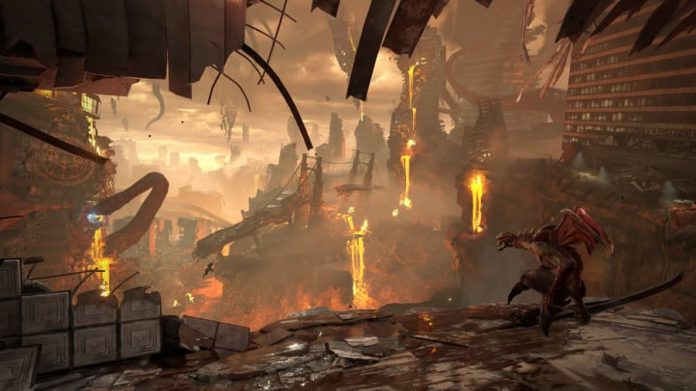 With a controller in my hands and headphones securely in place, I was ready for my first taste of DOOM Eternal, sequel to the game that I awarded a perfect score to just over three years ago. It’s what I had attended QuakeCon 2019 for, after all.

Rather than allowing players to make their way through the beginning of the game, the DOOM Eternal demo I was privy to propelled me to a part of the game where the demons were ferocious and my arsenal was plentiful. And in the interest of showing a bit of all that the game has in store, it fast-forwarded to key moments to provide a varied slice of action. But first, there was tutorial to conquer.

While Doom Guy – sorry, Doom Slayer – gained the ability to climb ledges in 2016’s DOOM, your traversal options are even further increased in DOOM Eternal. With new manoeuvres such as the dash and wall climb available, the tutorial was short but sweet, making sure I knew how to use these abilities to progress while also ensuring I was capable of using some of the game’s weapons effectively. But to be honest, I was glad when it was over; when I could be let loose on the demons of hell and turn them inside out.

The action did not disappoint. Easing me in gently with possessed and imps, I made ample use of the plasma rifle and shotgun, moving in to finish enemies off with Glory Kills when it was appropriate. So far, so DOOM 2016. But soon after, DOOM Eternal showed me that it isn’t just a simple sequel. There’s plenty new here that should get you excited.

New traversal manoeuvres are provided because DOOM Eternal has more emphasis on platforming. At numerous points in the demo it wasn’t obvious where I needed to go next, requiring me to take a look around and assess what platforms I could jump, dash, or indeed jump and dash to. The wall grab mechanic came in useful too, with climbable walls having a certain texture to make them clearly identifiable. 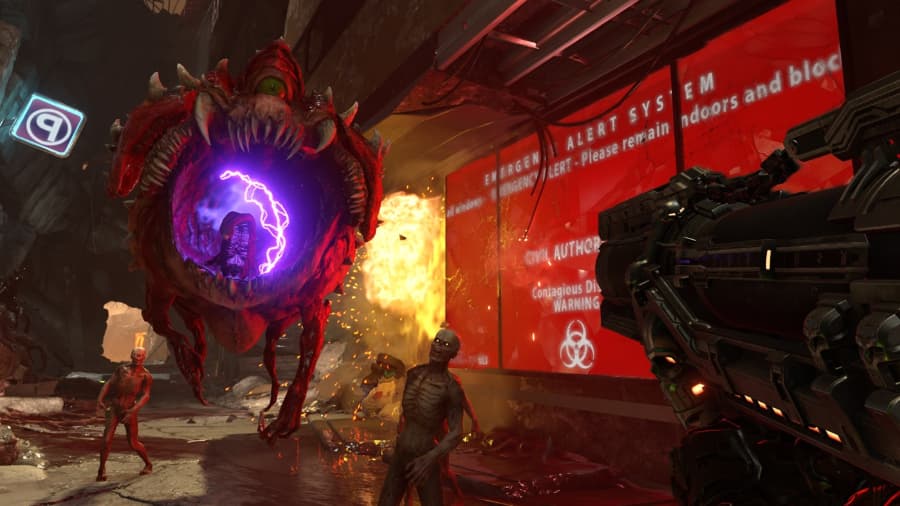 Jumping from one climbable surface to another proved a little bit tricky thanks to the Doom Slayer’s grabbing inconsistency – sometimes he’d grab onto a wall automatically when I dashed into it, other times I’d need to press in the right stick – but the repercussions weren’t so grave that it caused an issue. I merely spawned back on the ground with a minimal health penalty. Hopefully the Doom Slayer’s wall grabbing capabilities will be made more consistent before release, though even if they’re not, I’m sure players will learn to accommodate them.

DOOM Eternal is a more kinetic game in general than its predecessor. Along with the Doom Slayer’s new dash ability that can be used to quickly avoid incoming attacks, monkey bars strategically placed in arenas allow players to quickly and gracefully move from one place to another without even touching the ground. Your ability to keep moving is truly put to the test, as remaining stationary for even just a few seconds can be disastrous. You need to be able to quickly identify efficient routes around each arena, avoiding being cornered as you blast demons. And then just when you think you’re done, more will probably phase in, cranking up the pressure. 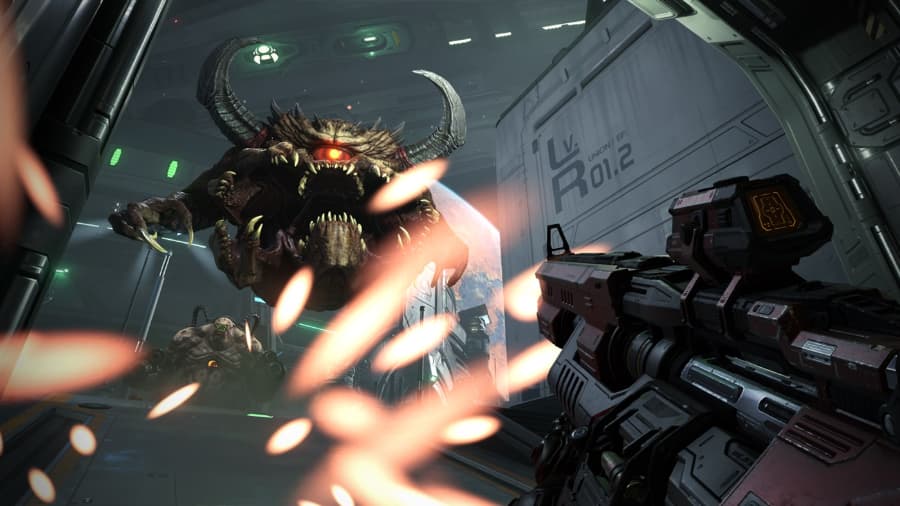 It’s the shotgun’s new grappling hook ability that’s the real game changer, however. While it’s useful for covering large distances that you otherwise wouldn’t be able to traverse providing there’s an enemy at your destination, it’s most useful in combat. You can energetically launch yourself at enemies, blasting them as you get up close to cause massive damage. It’s also useful to get out of danger; if you’re surrounded on the ground, simply hook yourself onto a Cacodemon or other airborne monstrosity and you can whisk yourself out of harm’s way.

This increased focus on combat strategy has me really excited about DOOM Eternal. With your improved athleticism and revamped weaponry, the fast-paced run-and-gun gameplay of 2016’s DOOM has been suitably upgraded. Players even have a new way to replenish their armour, with a shoulder-mounted flame thrower joining the chainsaw and glory kill to form a trifecta of resource-generating attacks. And then there are the enemies themselves, which can now be systematically broken down to neuter their threat.

Take the wonderfully recreated Arachnotron, for instance. It’s much easier to take down once you’ve destroyed its tail-like plasma launcher. The Mancubus, too, can also be made relatively harmless by shooting the guns mounted on each of its arms. As you run, jump, swing and grapple your way around each arena, the question is no longer which demon should I shoot first, but now also where. 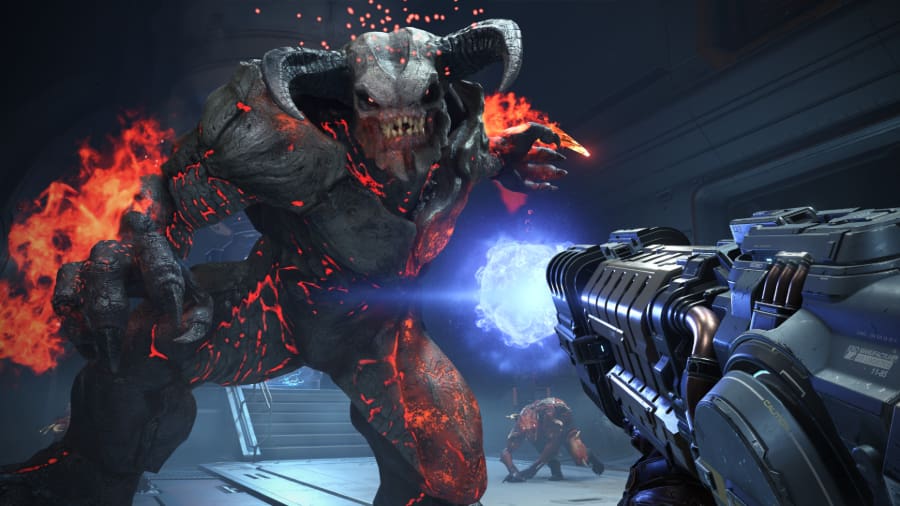 Wrapping everything up is DOOM Eternal‘s charming sense of humour. From pounding a Possessed’s head so hard that it comedically smooshes into its body, to climbing into a giant cannon to blast yourself to a new location, DOOM Eternal just puts a smile on your face. It’s loud, gory, and a little bit horrific, but it also acknowledges that it’s as daft as can be and just goes with it. It is very much endearing.

After playing through DOOM Eternal‘s 30-minute demo, I’m now so much more excited for its release. It’s DOOM 2016 cranked up to eleven, which is about all that needs to be said, really. It has more traversal options, more enemies and more weapons. And it all comes together to make an experience that feels familiar to someone that’s played DOOM 2016 to death, yet also surprisingly fresh. Unless something comes out of the blue in the next few months that blows us away, DOOM Eternal will probably be the next standard for first-person shooters.

Want to support GameSpew? Pre-order DOOM Eternal using our Amazon affiliate link. It won’t cost you anything extra, but we’ll get a small slice of the purchase.