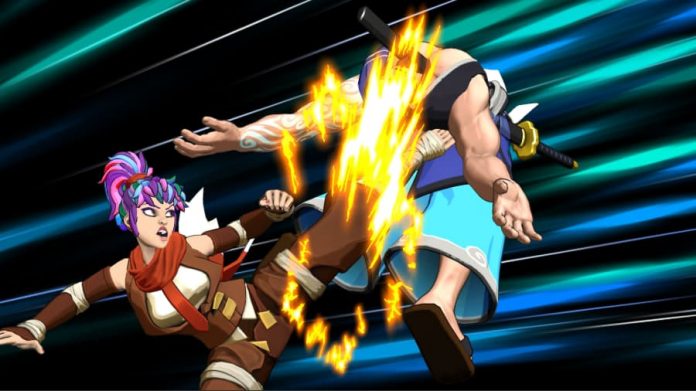 Fantasy Strike aims to be a simplified fighting game suitable for genre newcomers, yet also deep enough for veterans to sink their teeth into.

It’s successful, to a degree. After just minutes of play with any of its 10 characters, chances are you’ll know all their moves and have a good idea of when to use them. But the trouble is that with its limited moveset and features, Fantasy Strike soon gets rather tedious. And that’s a real shame.

Fantasy Strike has a lot going for it. You only have to cast your eyes over screenshots to realise that it looks gorgeous, with bold, colourful characters matched with equally eye-catching backgrounds. And you won’t have any problems with the game’s performance. It’s also got all the modes you could ask for: training, arcade, survival, and even boss rush.

Of course, you can take the action online, too. Casual matches are simple one-on-one affairs, while ranked makes you choose three characters, somewhat randomising the character you play as in each bout. Quite handily, you can set matchmaking going for both of these modes while engaging in other activities, so you don’t just have to sit waiting when there’s not too many people playing. And friend matches are also available if you know some people that also own Fantasy Strike. 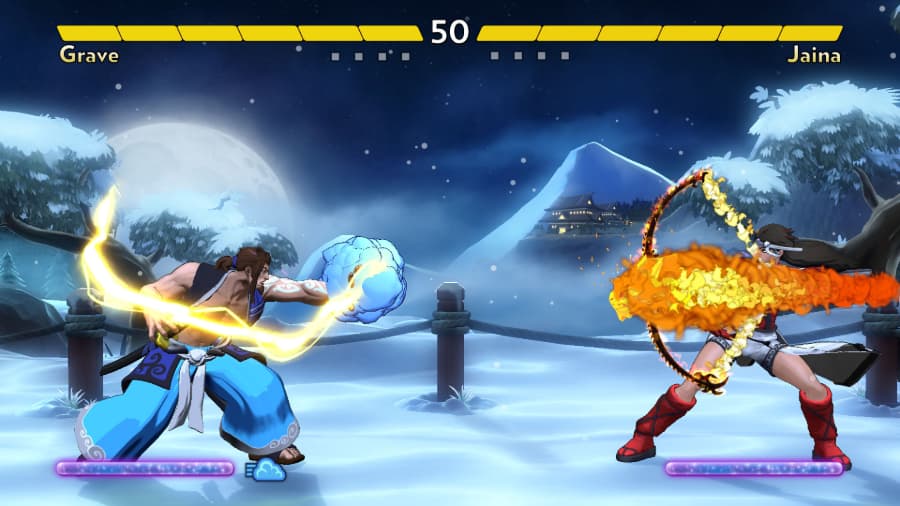 What’s both a blessing and a curse to Fantasy Strike is its combat. It’s admirable trying to make a fighting game that everyone can enjoy, but its done in such a way that makes it quite alien to those with even a bit of knowledge of the genre. You can’t crouch, for example, which feels very strange. Jumping is also tied to a face button unless you change it in the options. And escaping throws requires you to do nothing, quite literally; don’t press any buttons or directions at all, and you’ll brush off any normal throw with ease.

Perhaps if I’d never played a fighting game in my life before, Fantasy Strike‘s unusual controls wouldn’t bother me. And indeed, after a while, I got used to them. As a stepping stone to more advanced fighting games, however, Fantasy Strike might have been better not changing things that aren’t particularly complicated in the first place. It could have also done with perhaps just a few more moves for each of its characters.

Three attack buttons are at your disposal, two of those being special attacks unique to each character. You also have a super special attack button that you can use when a gauge is full, and a throw button. Overall, that gives each character about ten attacks to make use of. The result is that combat gets repetitive pretty quickly, with the same moves being used time and time again, especially if they’re effective. 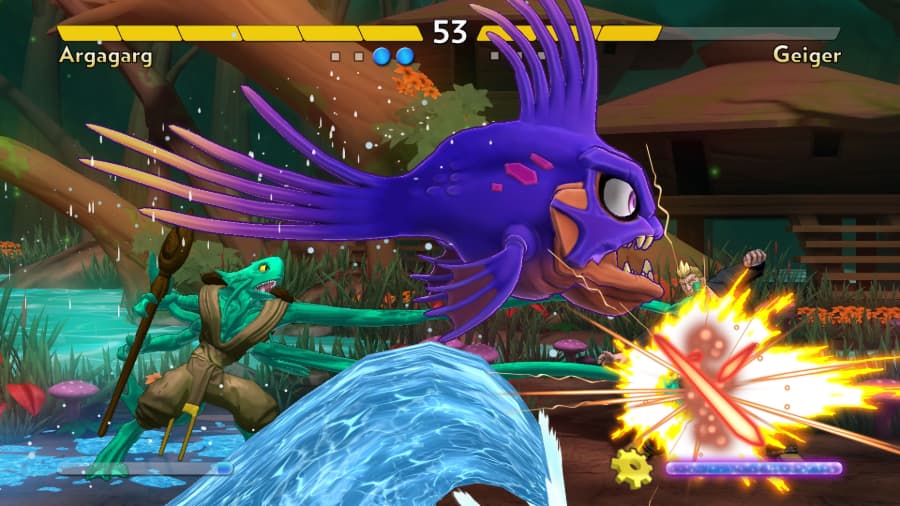 With such a small moveset available, Fantasy Strike does indeed level the playing field somewhat. You’ll quickly master each character, learning what moves to use and when. All fighting games are about strategy really, but here, it’s even more plain to see. Bouts often feel like playing rock, paper, scissor, with players waiting to see what their competitor does before launching an attack that counters their efforts. And with health bars split into as little as five segments, each one wiped out with just one blow, fights can be over in just a matter of seconds.

Seeing, and using, the same moves over and over again soon gets to be a little bit boring though. Sit down to play Fantasy Strike for an hour or so and it’ll begin to grate. And while characters seem to be fairly well-balanced, some moves are vastly superior to others. Playing against the CPU for instance, which isn’t really much fun, I was able to breeze through the last few stages of arcade mode by simply spamming one of Setsuki’s special moves.

If you really are new to fighting games, Fantasy Strike is worth giving a go. But you’re probably going to want to move onto something a little more advanced fairly quickly. It’s a well made game, but the action just gets too repetitive too fast because of its limited movesets. I just can’t help but feel that Fantasy Strike is a little too simple for its own good.

Fantasy Strike is available on PS4, Switch and PC. We reviewed the Switch version.