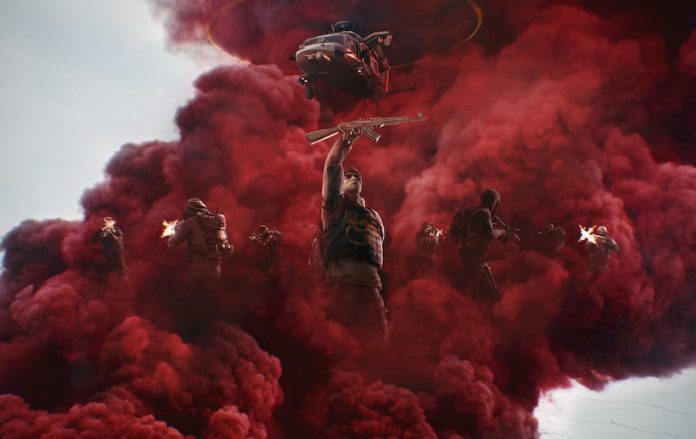 Still playing Ubisoft’s Ghost Recon Wildlands? Then there’s some good news for you.

That sounds pretty hectic, and we assume that’s very much the intent of Mercenaries. In the new mode, you’ll be thrown into a location with up to eight others. You’re not working as a team; you’re very much on your own. You’ll call for rescue, and following the call it’s your task to find the extraction point. A helicopter will be waiting for you – but you need to be the first one to board it. Take no prisoners; other players and CPU enemies are all there to stop you, but not if you stop them first!

You’ll start a new game of Mercenaries with no weapons or gear, and no idea where the extraction point will be. As you play, you’ll find radio transmitters that, when activated, will narrow down the possible area where the helicopter will be. And of course, there’ll be equipment to find along the way to increase your chances of surviving – and winning.

Mercenaries introduces some new mechanics to Ghost Recon Wildlands. Looting for gear is new to the game, and it also brings with it a new armour and health system. When you pick up gear, it’ll introduce an armour bar; the amount of armour it provides will depend on the specific piece of gear you pick up. There are also destructible doors in the game, behind which you’ll find intel or loot – or just a place to hide from your opponents.

The first time you complete your first match in Ghost Recon Wildlands‘ Mercenaries mode, you’ll be rewarded with a Lone Wolf costume. More rewards will be available, too, as you win matches.

Mercenaries is available to all players of Ghost Recon Wildlands from today.

Want to support GameSpew? Buy Ghost Recon Wildlands using our Amazon affiliate link. It won’t cost you anything extra, but we’ll get a small slice of the purchase.