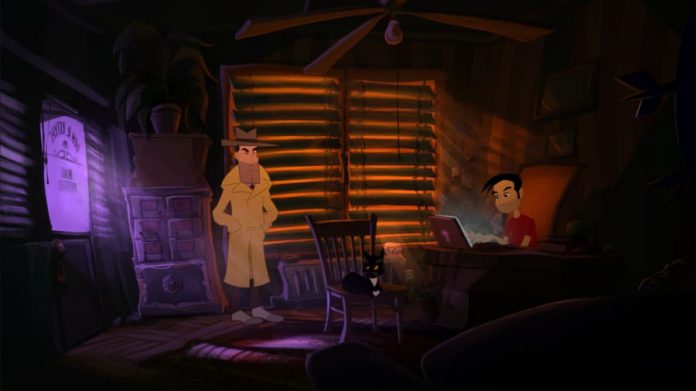 Gibbous is yet another video game that’s Lovecraft-inspired. But don’t let that put you off, because this traditionally animated point and click adventure looks very entertaining indeed.

Developed by Transylvania-based Stuck in the Attic, Gibbous – A Cthulhu Adventure aims to blend comedy with cosmic horror, and judging by the trailer you can watch below it does so rather well. It also has a talking cat, which sells us on the game instantly.

Taking control of three protagonists, Gibbous – A Cthulhu Adventure lets you explore Darkham, an unsurprisingly dark place in which cults are popping up everywhere. As Detective Don R. Ketype (see what they did there?), you’ll hunt down the Necronomicon, a powerful book that could cause untold chaos in the wrong hands. Luckily it’s ended up in the possession of Buzz Kerwan, a librarian who’s accidentally used it to enable his cat to speak.

So, playing as Don R. Ketype, Buzz Kerwan and Kitteh, you’ll embark on an adventure to learn the secret of the Necronomicon’s power, stop the evil forces at work in Darkham and turn Kitteh back into just a normal cat. Phew!

Gibbous – A Cthulhu Adventure will be available on PC, Mac and Linux from 7th August. You can add it to your Steam wishlist now.