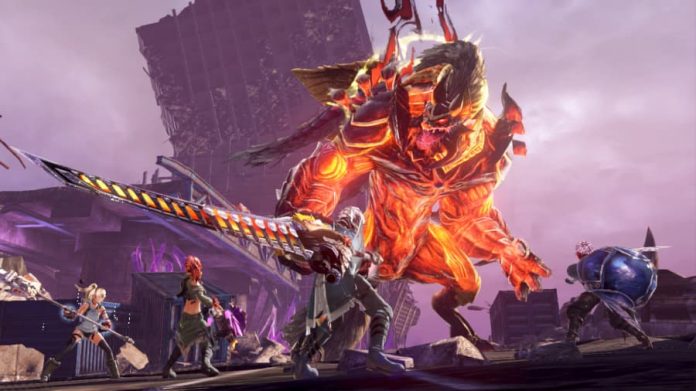 God Eater 3 was released on PS4 and PC earlier this year, but it feels more at home on Switch.

With the first two God Eater games made for PSP and PS Vita before being enhanced and expanded upon for re-release on PS4 and PC, the series’ handheld roots show through. These are games that offer quick bursts of action, but offer enough character development to keep you hooked in the long-term. And so releasing the newest entry in the series on Switch makes sense. You can play it docked if you want, but handheld is the way to go.

You don’t need to have played any of the previous games in the series to enjoy God Eater 3 on Switch thanks to its story being pretty much self-contained. Though it’s not really a game you should be buying for its story; it’s hard to care about any of the game’s stylish cast because despite frequent story scenes, you don’t really get to know them. You’ll care about your own character even less thanks to them being silent. God Eater 3‘s story is something you quickly learn that you just have to tolerate to enjoy the action. But thankfully, the only time it really irritates is when you have to hunt down characters between missions because they have something to say before you can progress.

It’s heading onto numerous fields to do combat with Aragami, God Eater 3‘s monsters, that keeps you playing the game. Many of them are small, posing little threat to you and your team of fellow God Eaters, but every couple of missions or so you’re likely to come up against one that is much more powerful. And that’s when God Eater 3 becomes really fun. Much of the time, God Eater 3 is easy to a fault, with your computer-controlled team members dashing off and killing monsters before you’re even aware of them. When it comes to the more formidable creatures that you’re faced with, however, you’re instrumental to your team’s success. 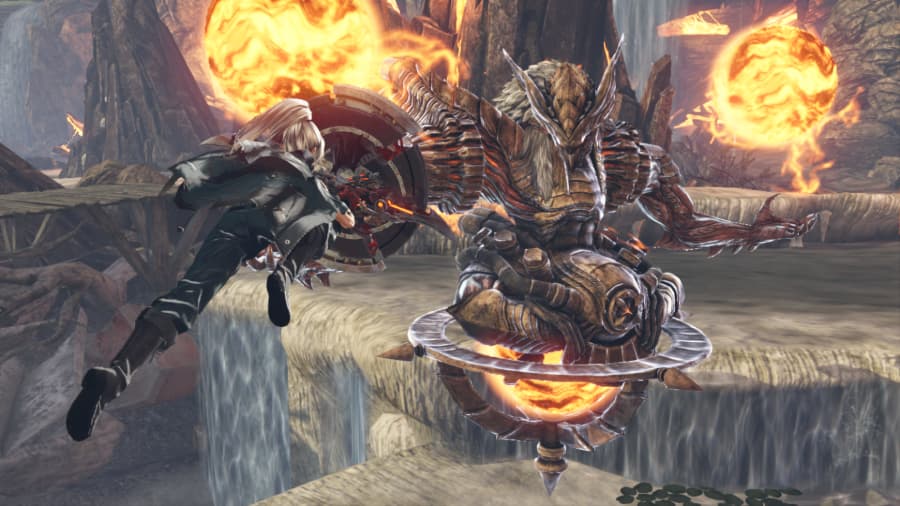 God Eater 3‘s toughest enemies need to be worn down. You need to study their attack patterns, learn how to avoid their most damaging skills, and target body parts to expose weak points. Initially, battling such foes might seem messy due to the game’s poor lock-on system and overly complicated controls, but the more you play God Eater 3 the more natural combat becomes, and the more capable you are of working around its camera issues. Eventually, you’ll be operating with a level of finesse you never thought possible of the game; dashing, blocking, hacking and slashing your way to success without much thought or frustration.

While God Eater 3‘s combat is entertaining enough, it’s the character development and combat options that’ll keep you going back for more. There are eight melee weapon types available, and you can freely switch between them between missions. Whichever melee weapon you choose, you’ll be happy to find that you can transform it into one of three firearm types with the tap of a button while in combat, and also one of three shield variants. And of course, the further into the game you get, the more weapons and shields there are available for you to craft and upgrade.

God Eater 3 takes customisation even further though, with a bewildering wide range of equippable skills. For instance, you can assign skills that modify the behaviour of your ground, air and step attacks once you’re in burst mode, initiated by devouring your enemies. There are also Abandoned God Arc skills that allow you to customise your equipment with numerous benefits and effects. And systems such as Engage and Accelerator Trigger allow you to enter customisable powered-up states by working with your team or completing certain actions. With so many variables, no two players have to be alike. It’s just a shame that making use of Abandoned God Arcs only really becomes beneficial as you reach the end of God Eater 3. 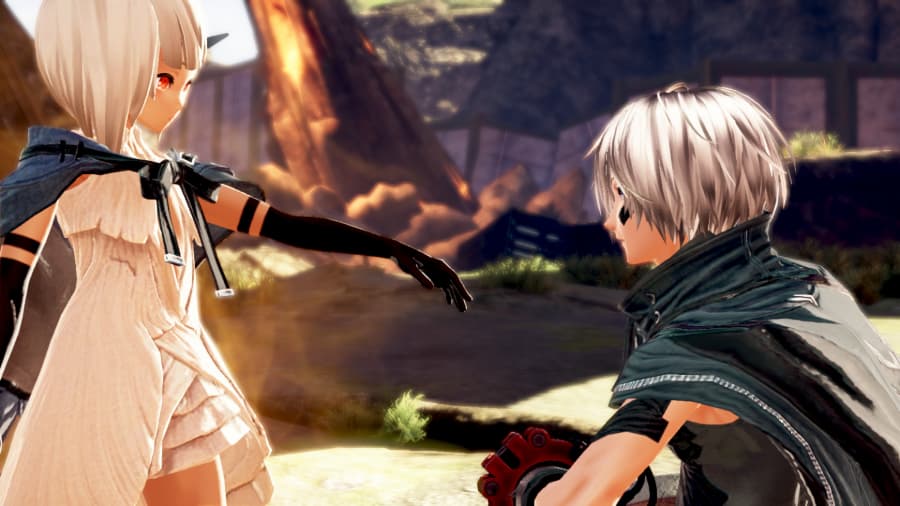 Heading straight through the story of God Eater 3 without paying any attention to the wealth of optional missions opened up along the way will take you about 20 hours. If you binge it you might find that the game starts to feel repetitive thanks to its limited number of maps and repeated enemies, but those who measure their time with the game will find it much more enjoyable. For many, God Eater 3 will actually only open itself up when the story is finished; the toughest missions will force players to push themselves to their limits, crafting the best items and developing the best skills. And they won’t have to engage in any inane chit-chat between bouts of action.

Concessions have obviously been made to the visuals of God Eater 3 to get it running on Switch, with solid performance seemingly being given priority. It’s a good choice, because the last thing that the game needed is performance issues during combat. It does mean, however, that when you’re playing the game docked it isn’t all that nice to look at. There’s plenty of aliasing, the draw distance of certain environmental objects is quite close, and some textures are very bland. In handheld mode though, God Eater 3 doesn’t look too bad at all. 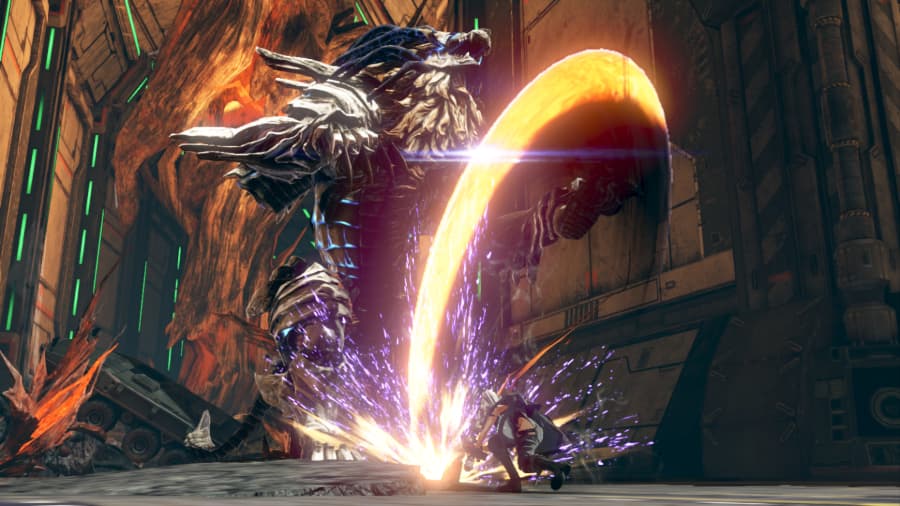 It’s easy to compare God Eater 3 to titles like Monster Hunter World because they share so many similarities. But God Eater 3 differentiates itself enough to attract its own fans. It’s simpler, faster-paced, and simply more fun. It may not be quite as deep in terms of actually hunting and taking down monsters, but it allows players more choice as to how they develop their characters. And while Monster Hunter World demands that you play it with other people to get the most out of it, God Eater 3 can be fully played in single player without you feeling like you’re missing out. Though if you can get a team of four together, it’s fun to play online, too.

God Eater 3 isn’t for everyone. Some will find it too easy, its story is passable, its controls take some getting to… I could go on. Thanks to its engaging fast-paced combat and considerable character development options, however, it’s well worth working through its flaws. If you’re after some Monster Hunter-style action on Switch you can’t really go wrong with it. And it’s perfect for those wanting to dip their toes into the genre; Monster Hunter Generations Ultimate is good, but it’s really not friendly to those not already familiar with the Monster Hunter series’ mechanics and quirks.

God Eater 3 is available on PS4, Switch and PC. We reviewed the Switch version.

Want to support GameSpew? Buy God Eater 3 using our Amazon affiliate link. It won’t cost you anything extra, but we’ll get a small slice of the purchase. 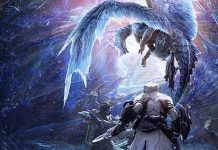