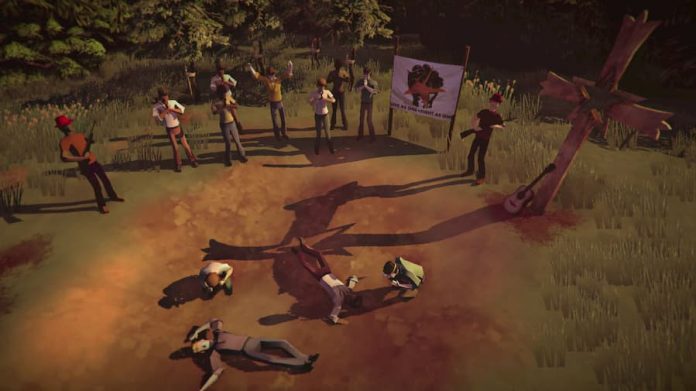 The upcoming action/infiltration game, Church in the Darkness lets you penetrate a commune in South America belonging to the Collective Justice Mission, and you’ll be able to play it on PC, PS4, Xbox One and Nintendo Switch next month.

The Church in the Darkness comes to us from Paranoid Productions, a name used by veteran game designer Richard Rouse III (The Suffering). It tells the story of ex-law enforcement officer Vic, who travels to South America to check on his nephew residing in the cult compound known as ‘Freedom Town’.

The game is played from a top-down perspective, and aims to tell a unique narrative while providing stealth/action gameplay in an open-ended environment. You are offered the choice to tackle the game in a variety of ways; you can sneak through the compound unnoticed, deal with guards in a non-lethal way, or kill everything in sight. Whatever you choose, you will have to deal with the consequences of those actions.

The Collective Justice Mission was founded by two charismatic leaders, Isaac and Rebecca Walker, played by real-life voice acting power couple Ellen McLain (GLaDOS from Portal) and John Patrick Lowrie (the Sniper in Team Fortress 2). Much of the story is revealed to the player through their announcements over the compound’s PA system, and you get a glimpse into the radical doctrines of the community.

Each playthrough of The Church in the Darkness is promised to be unique, with the narrative shifting depending on the methods you use to investigate the mysterious Walkers and their followers. Themes of utopias, the psychology of tight-knit fringe societies, and the lengths people will do to just to do what they think is right make this a title that should be on your radar.

The Church in the Darkness will be available for PC, PS4, Xbox One and Nintendo Switch on August 2nd.