Hello, my name is Kim and I’m a self-proclaimed LEGO obsessive.

I’m not ashamed: I may be thirty-one years old but much of my disposable income goes on those irresistible plastic bricks. And of course, as a result of that, I like to dabble in LEGO-themed video games too. The console releases of recent years have got a bit stale, but I’ll still try them out in the hopes of an improvement. A new one has just landed on iOS and Android though; it’s called LEGO Tower, and it’s all about, well, building a tower made out of LEGO. It’s pretty simple, but its LEGO-ness makes it rather addictive to the likes of me.

It’s not a new concept. Developer NimbleBit released Tiny Tower back in 2016; a free-to-play mobile game about adding new floors to a skyscraper. Each floor will either be residential, allowing new people to live and work in your building, or some kind of shop/service, where your residents will work. You’ll spend money to buy stock and new floors, and earn money by selling stock and collecting rent off your residents.

LEGO Tower, from the same developer, is exactly Tiny Tower, but with a beautiful LEGO-themed facelift. And it is beautiful. There are lots of nods to genuine LEGO sets in there – my elevator is currently themed on Emmett and Lucy’s rocket-house from The Lego Movie, for example. And on the top of my tower I’ve currently got Garmadon’s Shark Mech, but I could swap it out for the real Old Fishing Store set, or the top of the LEGO Expert Parisian Café. I get a real kick out of seeing sets I’ve built in real life digitised in such a way.

The floors of the tower, too, contain lots of cute little nods to LEGO. If you’ve ever seen the mammoth £300 Ninjago City set, you’ll recognise a lot of the interiors have been pulled directly from that. And even rooms that aren’t based on actual sets have been wonderfully created using actual LEGO bricks and elements. Add to this the fact that your tower is populated by a bunch of living, working minifigs and the whole thing is just incredibly delightful. 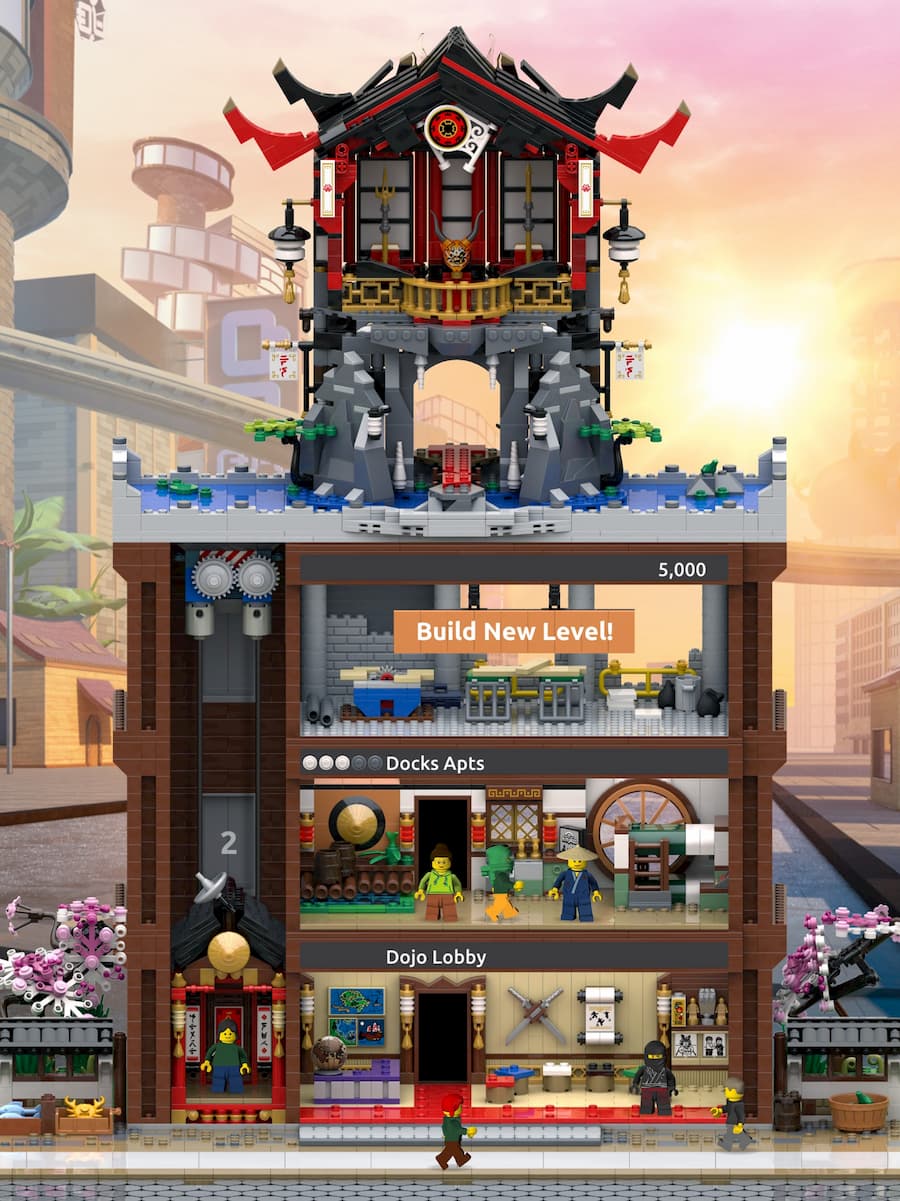 It’s a shame, then, that the game itself isn’t all that engaging. Fine, sure, I still wasted about two hours of my night yesterday, mindlessly clicking away and watching those coins roll in. But there isn’t a great deal to it. The thrill is, of course, building a new floor on your building, choosing a residential apartment or store/service to occupy it, and seeing a new revenue stream open up. But building a new floor quickly becomes expensive, and that means waiting around a lot to earn enough in-game currency.

It isn’t a case of LEGO Tower wanting you to pay money to speed the process along, either. Of course, like any mobile game these days, LEGO Tower does have a premium currency that you can buy with real dough. But while this premium currency – “bux” – can be used in a variety of ways to speed things along a little, it can’t be used for the one thing you actually want to speed along: buying new floors. Floors can only be built using coins, which can only be earned by playing the game. Or by waiting until the game’s generated enough coins for you by itself.

I was gifted 15,000 of LEGO Tower‘s premium bux when I started playing, which has a value of £4.59. They’re somewhat useful; I can use them to upgrade my tower’s lift, making it go faster and giving me extra coins for using it. When you’re actively playing the game, you’ll get a frequent stream of visitors wanting to use the lift. You’ll have to interact with them, but each time the lift is used you’ll get a number of coins. The higher they visit, the more coins you get. Aside from the automated coins generated from your shops and residents, this is the only real way to earn coins by playing. In that sense, it’s probably worth upgrading your lift a little in order to help you earn more coins.

Bux can also be used to cut out delivery times of shop stock, or to upgrade the capacity of your shops. It’s generally a small amount, so just by playing the game you’ll be able to earn enough Bux to do this sort of task regularly. But you can also use Bux to buy new vehicles. And owning vehicles allows you to earn Bux without spending real money. 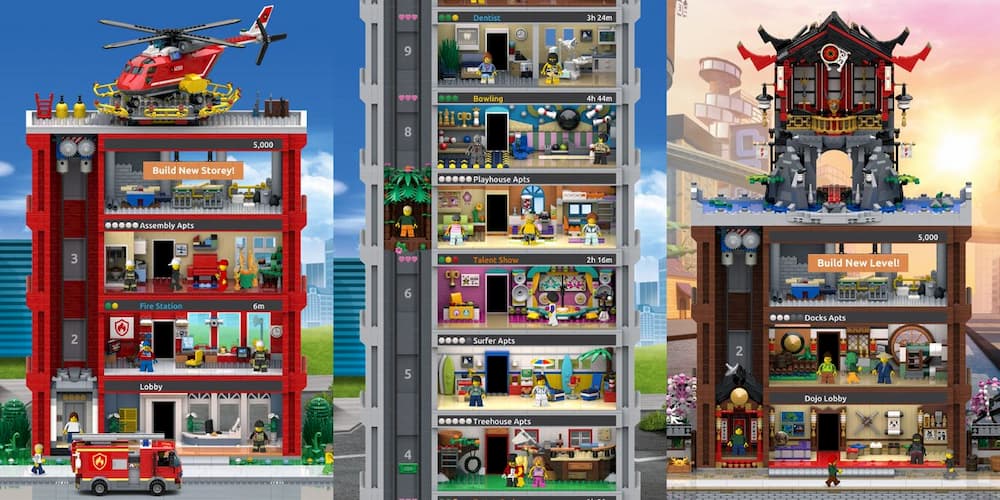 You’ll get your first vehicle free – a motorcycle. It’ll pull up outside of your tower every so often, giving you a task to complete. These tasks are the most involved part of playing LEGO Tower, and they’re pretty fun but quickly get repetitive. You’ll be asked to find a particular minifig and click on them, or play a short hidden object game by finding a random pizza box, or some other LEGO item, that’s been placed somewhere in your tower. Finding them grants you a few bux each time. Unlocking more vehicles means you’ll get those kinds of tasks more frequently, with other vehicles offering a higher bux reward.

But none of those activities grant you any coins. It’s a pleasant surprise, in a way, that you can’t purchase coins with real money – it cuts out any truly predatory play-to-win nonsense – but at the same time… I just want to build a nice tower. I’ve got eight floors in my building now, and I need 51,000 coins to build the next one. That’s a lot of elevator rides, and a lot of sitting around doing not much of anything, waiting for my shops to earn money – at a rate of 144 coins per minute. I still have 5,000 coins to go. Yawn. You do earn coins while you’re away from the game, but only if you have stock in your shops.

LEGO Tower is truly beautiful. It really is. But I just want to build a giant tower high into the sky, filled with glorious LEGO elements. I don’t think I have the patience to do all the waiting around in between.

LEGO Tower is available now on iOS and Android, and it’s free-to-play.