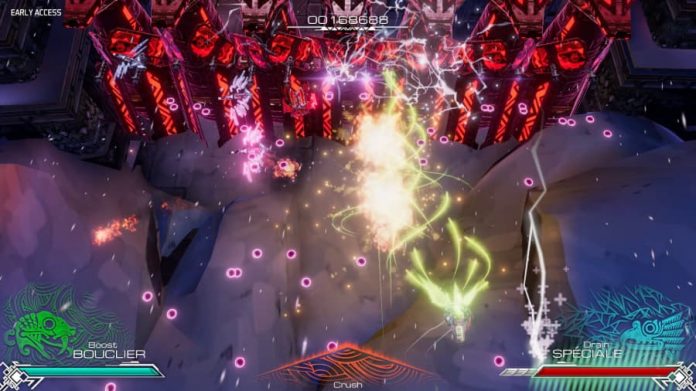 Injecting a bit of originality into the age-old shoot ’em up formula isn’t an easy task. But it’s something that Pawarumi manages to do.

While its aesthetic makes it stand out from the crowd, a mix of Aztec and futuristic sci-fi, its rock, paper, scissors-style shooting system is what cements it as one of the most interesting shoot ’em ups of recent years. It’s just a shame that there’s not much to it.

Pawarumi lets you let rip with three different fire types at will. Green bullets dance forward in a pattern, damaging enemies in a fairly wide range. A blue laser is a beam of concentrated energy; narrow and focused. And then you have what are essentially red missiles, leaving your ship to seek and destroy targets that have been spotted by a red-hued vision cone. But each fire type is more than just a different way to take down your enemies.

You see, pretty much every enemy in Pawarumi is colour coded, and different results occur depending on which type of attack you use to combat them. Shoot a blue enemy with the blue laser, for example, and you’ll recharge your ship’s shield. Shoot it with red missiles and you’ll do additional damage. And finally, if you shoot it with green bullets, you’ll recharge your special attack. The result is that you need to employ strategy when killing the hordes of enemies ahead of you. 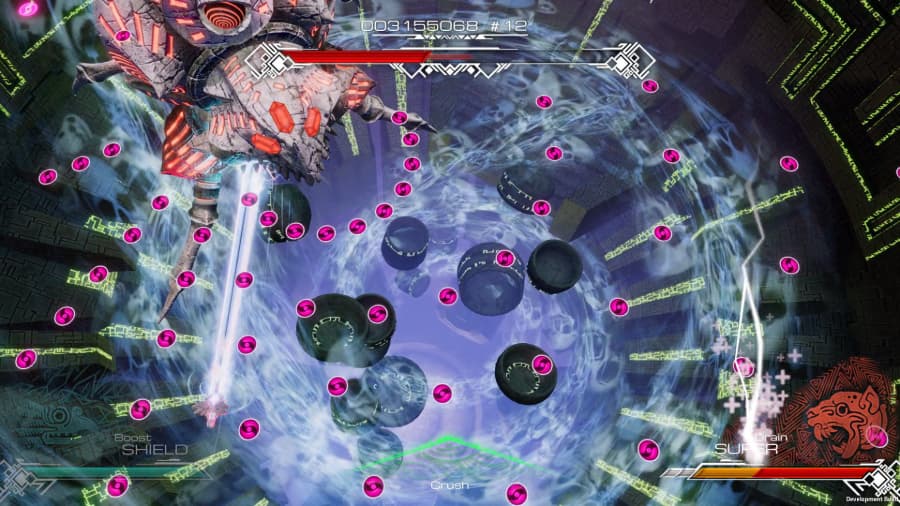 To defeat enemies effectively you need to use the attack type they’re weak against. If your shield is low, however, then you’re probably better off trying to match enemy colours to recharge it. And if you’re keen to have a highly destructive special attack available for use, you need to use the attack type that drains enemies of their power. Initially, keeping track of it all seems like a real task, but after an hour or so of play it becomes second nature.

Three difficulty levels are available for Pawarumi‘s arcade mode. Easy is just that; you’ll breeze through it without much challenge. But only four of Pawarumi‘s five stages are available in easy mode, preventing you from truly completing the game. You’ll need to hone your skills and master the game’s colour-coded attack system to complete the game on at least normal difficulty if you want to see its real ending.

As you’d expect, Pawarumi‘s bosses present the biggest challenge, and are also the most interesting enemies to fight against. They have numerous attack patterns, multiple phases, and sometimes test your knowledge of the game’s colour-coded attack system. They are undoubtedly the highlight of the game, as all of the game’s standard enemies are pretty unremarkable. 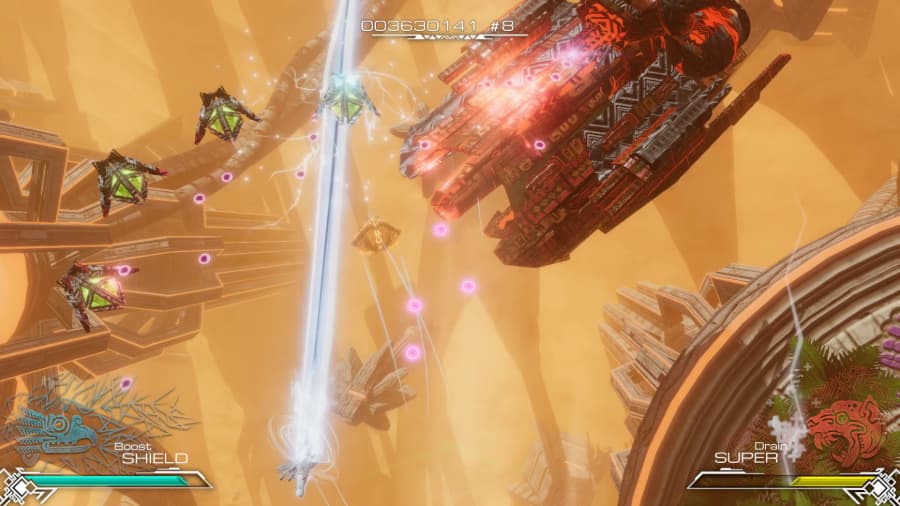 Once you have completed Pawarumi though, there’s little else to do. Aside from a training mode that lets you jump straight into any stage, there are no additional modes such as score attack or boss rush. You can’t even play the game in co-op. All there is to draw you back in is worldwide leaderboards.

Ultimately then, unless you’re a score chaser, your fun with Pawarumi is likely to be a short-lived affair. It’s an exciting game that feels surprisingly unique, but there just isn’t much to it. Depending on your skill level, you might be done with it in just a matter of hours. Though chances are you’ll return to it in the future for a quick blast of futuristic Aztec shoot ’em up fun.

Pawarumi is available on PS4, Xbox One, Switch and PC. We reviewed the Xbox One version.