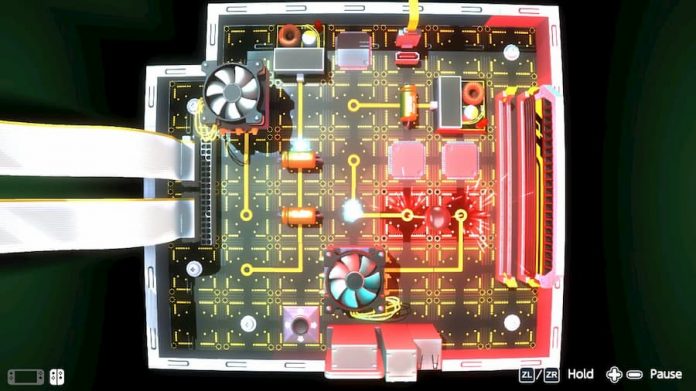 I’m quite partial to those minigames you get where you need to complete circuits.

You know which ones I’m talking about. Maybe someone is trying to hack into an electronically-closed door and they need to reroute a circuit. Or someone’s hacking into some kind of security system. They generally involve flipping switches, placing wires, or turning around piping.

Run The Fan, which has just released on Nintendo Switch, seemed to promise a similar thing. It is a game about completing circuits, but it manages to be both more simplistic and more convoluted in how it goes about it. Each level presents you with a computer circuit board. Your job is to, er, run the fan. To do that, you need to get the electrical current from the power source to the fan. But there aren’t any switches to flip or wires to place. Instead, your tool is a metal ball, which you’ll need to use to bridge gaps in the wiring.

It starts off fairly easy enough, with just one gap in the wiring to fill in. But it doesn’t take long until things get a little more complicated. With only one ball, you’ll have to pass the current through one gap before manoeuvring your ball to fill the other. Should the current fall off the end of an unattached wire, it’s game over.

While having just one metal ball to move around sounds easy on paper, Run The Fan soon gets fiendish. With more than one current to keep track of and multiple fans to power up, timing and co-ordination is key. Just one mistimed move and you’ll have to start the level all over again.

Controlling the ball is a little tricky to be accurate with; you’ll need to rotate both sticks, which requires careful movements. It’s not always clear initially where the current(s) will start from either, so it can be easy to miss, leading to a failed level before you’ve even begun.

But with over 50 levels to work through, Run the Fan‘s the sort of game that’s fun to dip into in short bursts, completing a handful of levels at a time. It may not be the most inspired or appealing game out there, but it’ll certainly keep your brain in gear – and with a price tag of just $3.99, you can’t really go wrong.