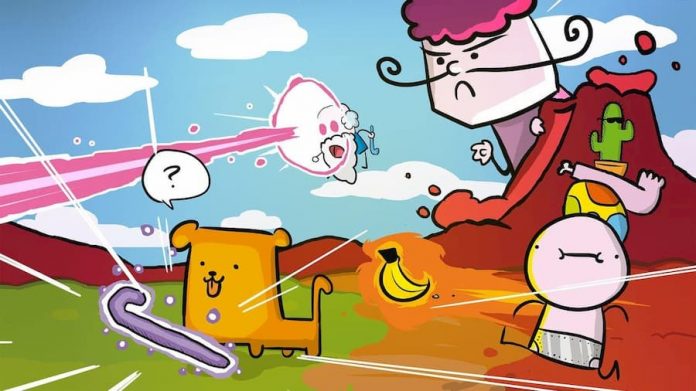 There are some things in life that I really want to like, but I feel like they’re fighting me every step of the way.

Super Cane Magic Zero is one of those things.

A cutesy action RPG at first glance, Super Cane Magic Zero wants to wow you with its edginess, its irreverent humour and its non-stop action. There’s no denying it has all of those things, but for much of the time I spent playing Super Cane Magic Zero, I couldn’t shake one particular feeling: it tries so hard to be funny that it forgot to actually be fun to play.

The game starts you off in a small area to get you used to its unusual controls before letting you loose in the wider world. And it does indeed take a little while to get used to. Enemies can be attacked with an equipped weapon using your right shoulder button, or you can use a special ability by pressing the right trigger. You’ll need to use your right stick, like a twin-stick shooter, in order to aim. And you’ll also be picking up and throwing stuff. A lot. You can throw knocked-out enemies against walls to do more damage to them, or throw one into another enemy to damage them both. See a chest? You can’t interact with it to open it; you’ll need to pick up and throw that too. 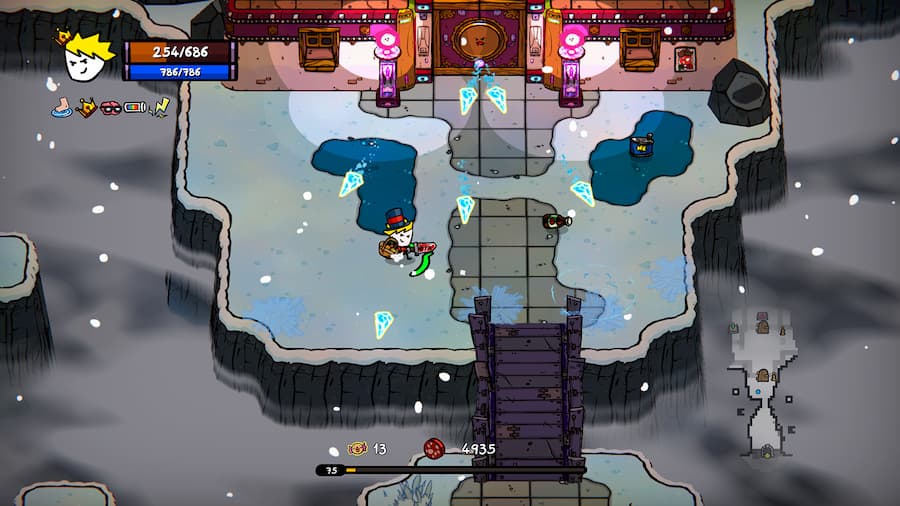 It’s one of the many ways in which Super Cane Magic Zero sounds fun, but is actually rather tedious in practice. Picking things up is rather clumsy, especially when there are quite a lot of enemies on screen. But you’ll adjust to it, and once you’re out into Super Cane Magic Zero‘s big, labyrinthine world, you’ll want to pick up as many enemies as you can, to toss them off ledges and into lava. It’s easier than relentlessly attacking them with your weapon.

Exploring the game’s world teeters somewhere between tedious and entertaining. Despite having story missions to follow, Super Cane Magic Zero never gives you any form of waypoint, so it’s up to you to figure out how to get around. That means trudging around pretty large maps, looking for signposts and hoping you’re going the right way. More often than not, it means discovering something new on the way to one mission and ending up doing something totally different. It’s no bad thing, but it also means you can spend a hell of a lot of time simply wandering and not really getting very far.

As you do explore, though, you’ll find mini puzzles to complete and, at its best, Super Cane Magic Zero is reminiscent of old school Zelda. Perhaps you’ll have to release a series of switches to open a door, or find a number of keys in order to access a new pathway. Those moments are unfortunately fleeting when the other annoyances of the game all rear their heads again. They’re never away for very long. 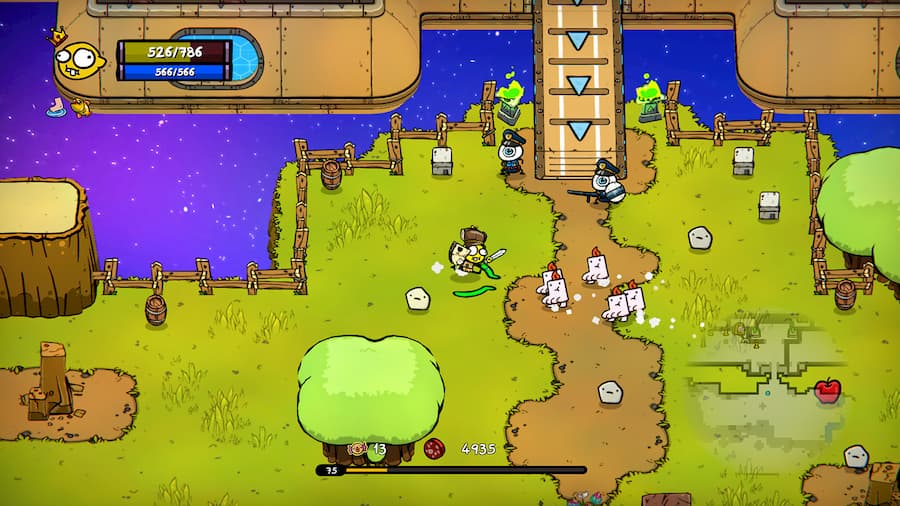 One of the biggest annoyances of Super Cane Magic Zero is its load times. Oh sweet Jesus, its load times; perhaps the longest of any game I’ve played in recent times. On Switch, you’ll be waiting at least two minutes before the game loads the first time you play it. And then every time you pass through a doorway within the game you’ll have to endure another 20+ second loading screen. It makes you reluctant to enter new areas after a while. God forbid the area you’ve just entered turns out to be a dead end (which it quite often will). Back to the loading screen you go.

Those loading screens will remind you that Super Cane Magic Zero wants to be funny. You’ll be treated to splash screens with oh-so-funny messages like “PRO TIP: Remember to breath multiple times during your gaming session” or “IF you’re watching this on Youtube, click LIKE now!”. The same type of try-hard humour fills the game’s dialogue too. It sometimes lands but rarely, more often than not leaving you groaning more than anything else.

The music, too, is equally groan-worthy. It’s incredibly repetitive, with the same grating 16-bit style melodies playing on loop as you explore big areas of the map. One or two areas have a track that isn’t quite as bad, but much of it left me wanting to plug up my ears with cement.

While I’ve been very hard on Super Cane Magic Zero so far, it isn’t all bad. Its art style is absolutely charming and, as I’ve said, exploring its quirky world can be rewarding. And the game wastes no time in throwing plenty of loot at you. You’ll frequently find new weapons or items to equip, and there’s an endless supply of consumables dotted about. These need to be picked up and eaten; pieces of food will increase your health, and some may give you temporary power-ups. Beware though; there are plenty of traps, and eating the wrong item will damage you. Although I did also eat a whole, live puppy and it was apparently very delicious. Sorry/not sorry. 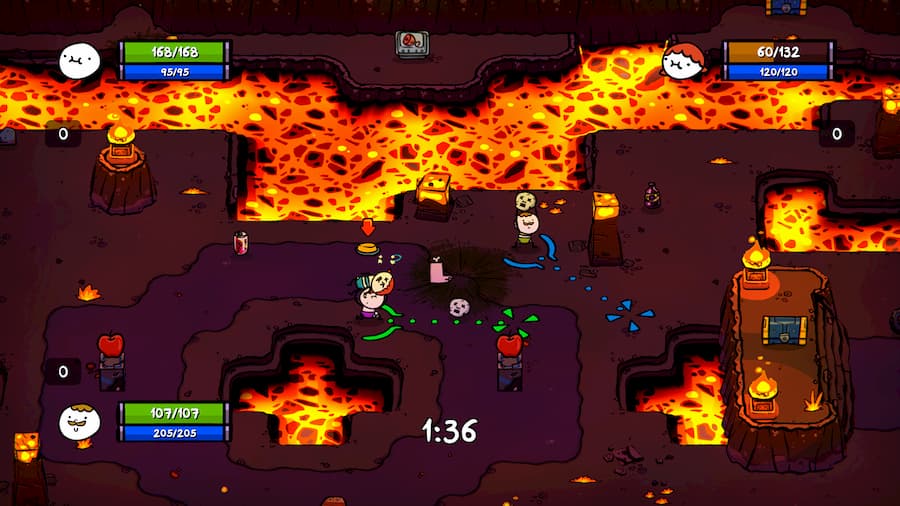 The difficulty you choose to play Super Cane Magic Zero will massively change your experience, too. On the easiest setting you’ll have unlimited lives, meaning should you die you’ll just pick up right back where you left off from. Other difficulties limit those lives, and while extra lives can be picked up while you play, it means if you lose them all, it’s Properly Game Over. I opted for the easiest setting. Super Cane Magic Zero, in single-player, takes no prisoners. Enemies are relentless, and you’ll often find yourself stuck in a loop of being knocked down by projectiles and then attacked by roaming enemies.

In that regard, Super Cane Magic Zero is definitely much more accessible – and somewhat more fun – when played in co-op. Large groups of enemies are easier to manage when there’s two or more of you swinging your weapons haphazardly at them. And whether it’s just because you’re bringing a friend or two along to suffer with you, for some reason Super Cane Magic Zero‘s annoying quirks are easier to bear, too.

There are some things to like here. And the fact that Super Cane Magic Zero has been made by such a small team is worth applauding. I just wish it tried less hard to be funny and more hard to be fun. Cut down the loading times, give us a waypoint from time to time, and stop expecting us to pick up every item we see and we might have something worth spending time with. As is currently stands, Super Cane Magic Zero is just too frustrating to wholeheartedly enjoy.

Super Cane Magic Zero is available on PS4, Switch and PC. We reviewed the Switch version.