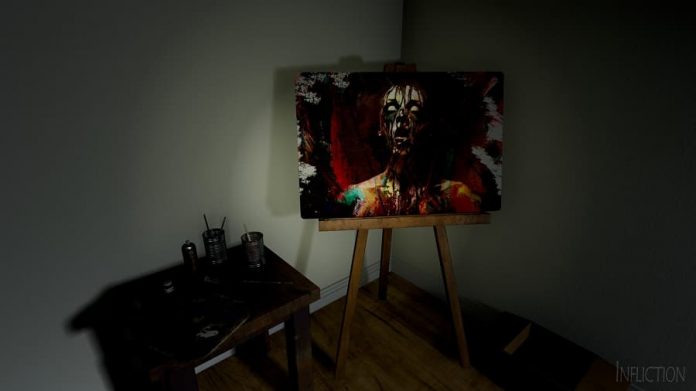 The interactive horror experience from Caustic Reality, released on Steam last year, will be coming to PS4, Xbox One and Nintendo Switch in the fourth quarter of 2019.

Does anyone else find it odd, that one of the most undeniably influential horror games in recent years was never actually released? Well here we are, Infliction, just one of countless recent horror games that take clear inspiration from P.T. – the playable teaser for Kojima Productions’ now cancelled Silent Hills. In Infliction, the player starts out exploring an apparently normal suburban house. However, it’s not long before we slide into a horrific nightmare world, haunted by a vengeful spirit.

It wouldn’t be fair to call it a P.T. ripoff though, Infliction has some original ideas, and also has strong echoes of acclaimed exploration game Gone Home. Objects around the house can be picked up and examined, while voicemails and unlocked memories are read to you in voice-overs. Piecing together the fragments of clues scattered around the house, it might be possible to unravel the dark mystery of what happened there; as long as you’re not horribly murdered by a ghost.

While Infliction was already scaring the pants off PC users in time for Halloween last year, console owners have had to wait a bit longer. Happily, the wait is almost over; you’ll be able to Inflict that same terror on yourself very soon.

Infliction is coming to Playstation 4, Xbox One and Nintendo Switch Q4 this year.