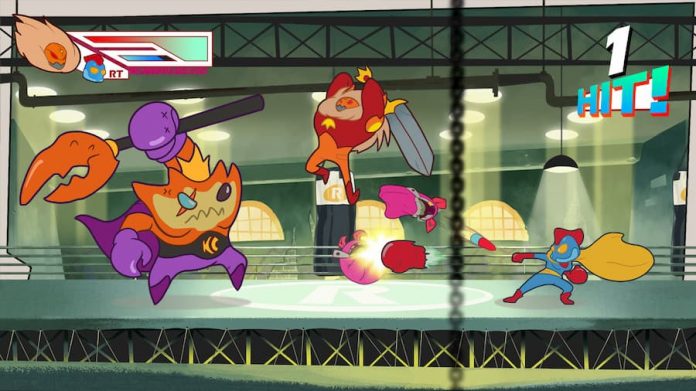 If I transformed into a powerful being in the Pass the Punch universe I’d probably be ramen noodles.

After all, in Sumo Digital’s newly-announced 2D beat ’em up, the residents in the town of New Atlas transform into beings based on the things that they do in their every day lives. And I eat a lot of ramen noodles.

Sumo Digital has announced that Pass the Punch, its own new IP is headed to PC, Nintendo Switch, Xbox One and PlayStation 4 later this year. This fast-paced game is set in a world influenced heavily by 1980s and 1990s Saturday morning cartoons.

The game follows the story of Rush, a resident of the previously mentioned New Atlas, as she fights the horrible villains King Crab and Red Velvet who are determined to turn Rush’s favourite places about town into corporation franchises.

Players will have to learn the moves of each of the playable fighters in order to master the game and defeat the evil villians. The game is playable in single player with an AI sidekick or in two-player local co-op. Try for high scores, discover secrets and kick butt until all of your enemies are TKO’d.

There’s no set release date for Pass the Punch yet, with its release date expected before the end of the year. We’ll have more information as it becomes available.