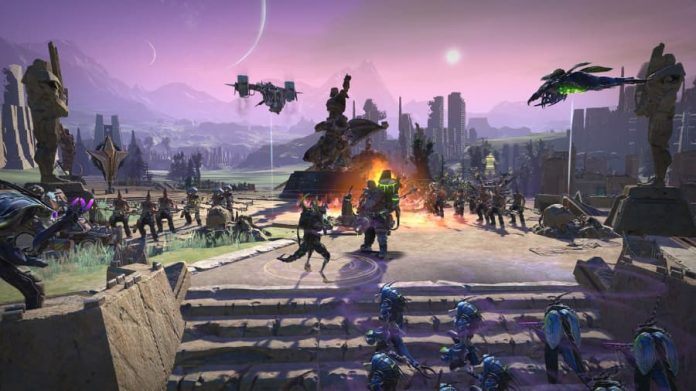 It’s been a while since I’ve played a turn-based strategy game, let alone a 4X, but Age of Wonders: Planetfall drew me in because of its setting. I mean, who doesn’t want to engage with a world that contains laser-mounted dinosaurs?

But there’s also another reason why I’ve been playing Age of Wonders: Planetfall. For once, it’s a 4X that’s not only available on PC, but also PS4 and Xbox One.

While the Age of Wonders series has been going for some time now, Planetfall‘s sci-fi setting makes it unique. Even if you’ve never played an Age of Wonders game before, like me, you might want to immerse yourself in it. And you can, because no prior knowledge of the series is required. It might possibly help you get to grips with its core mechanics, but it’s not necessary.

I’m not going to lie though: Age of Wonders: Planetfall is initially bewildering. While the game has a tutorial, it bombards you with information that you’ve got no chance of absorbing in such a short period of time, and fails to truly explain some of the core aspects of the game. Coupled with a myriad of menus that are easy to get lost in when playing with a controller, you have a game that you learn more about as the hours pass by.

Thankfully, even without fully understanding everything that Age of Wonders: Planetfall has to offer, it’s engaging. You’ll muddle your way through your first campaign map, and perhaps even fail, but as you become more accustomed to each facet of the gameplay, you’re empowered. What was once a struggle becomes second nature. And with that, exploring, expanding, exploiting and exterminating become ever more enjoyable. 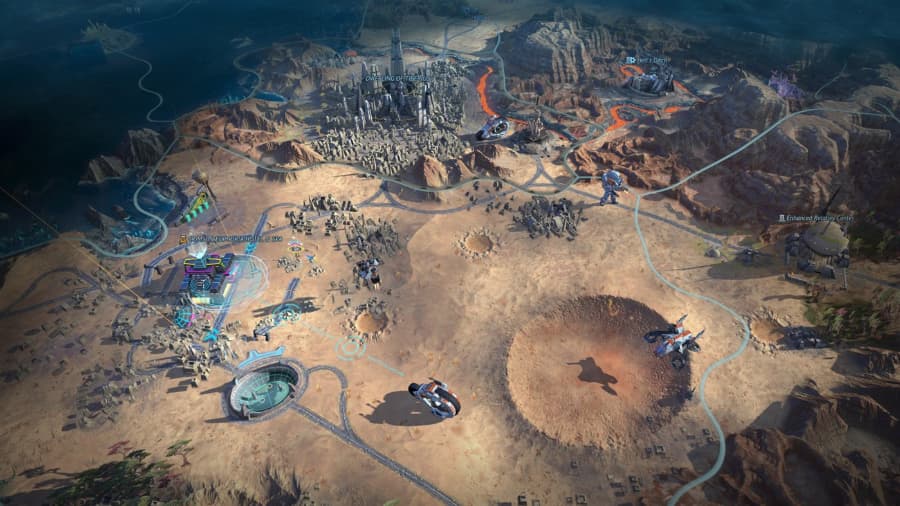 Three campaign maps are initially available, each allowing you play as a different race. Complete those and more maps become available. Complete those and yet more open up. Eventually, it’s possible for you to take control of six races, each very much different from one another. The Vanguard is your bog-standard human faction, for example, reliant on vehicles and manpower to get the job done. The Amazon faction, on the other hand, is an all-female force that makes use of dinosaurs. Perhaps the most out-there faction, however, is the Kir’Ko, an insectoid race that engages its enemies in close combat.

Whichever race you choose, there are multiple ways to achieve victory. Wiping out all opposition is one of them, but it’s a bit tyrannical. Sometimes you might decide to win over your competitors and form friendships with them, or achieve victory by completing a specific task while only engaging in combat when it’s necessary. The options available to you in Age of Wonders: Planetfall are plentiful, allowing you to be the leader you want to be. Although sometimes your hand might be forced.

However you decide to play, exploring worlds and expanding your control of them is necessary, and thankfully it’s easy to do. As your colony grows, you’re able to annex surrounding areas and then exploit them for their resources. Resources can also be found as you explore, and you may even encounter non-playable factions. Whether you work with or against them is your call, but the additional units they can offer you as you improve your relationship can be very helpful. 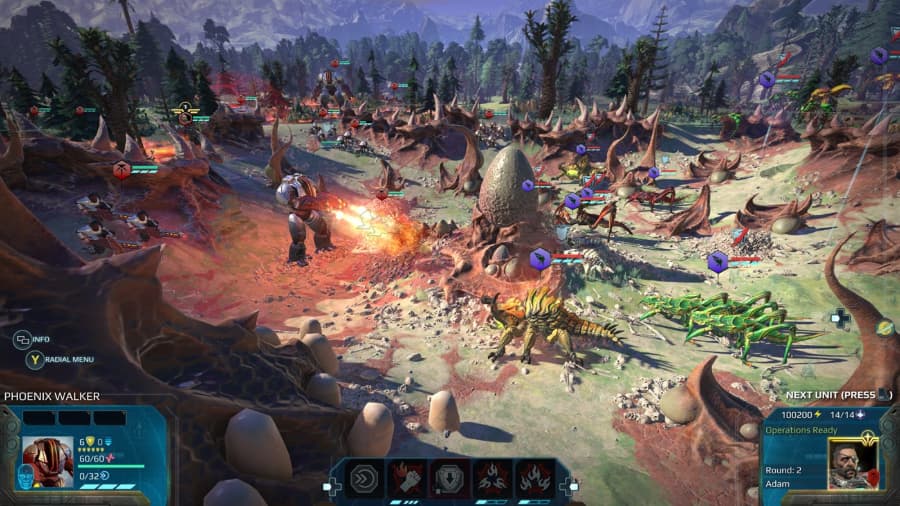 Not everyone you encounter in Age of Wonders: Planetfall is open to settling things via discussion though: combat is quite often unavoidable. Each hex on the map holds an army of up to six units, and by invading a hex held by enemy forces combat is commenced. If you have one or more armies adjacent to the hex, they’re dragged into the battle too. Like your activities out of battle, combat is a turn-based affair; you move your units then the enemy moves their units. The force that gets wiped out is the loser.

Combat is enjoyable because it’s so deep. The placement of your units is pivotal to your success, and also whether you place units in Overwatch or defensive states when not actively attacking. Each unit generally has its own quirk that makes it valuable, and outside of combat you can mod them to make them even more unique. Your heroes can also be levelled up to make them more formidable, with many skills available to unlock that make them highly capable leaders. And if for some reason you don’t want to bother with the ins-and-outs of combat, you can automate it. You’ll just be shown the result of your skirmish, along with any spoils that you’ve earned. 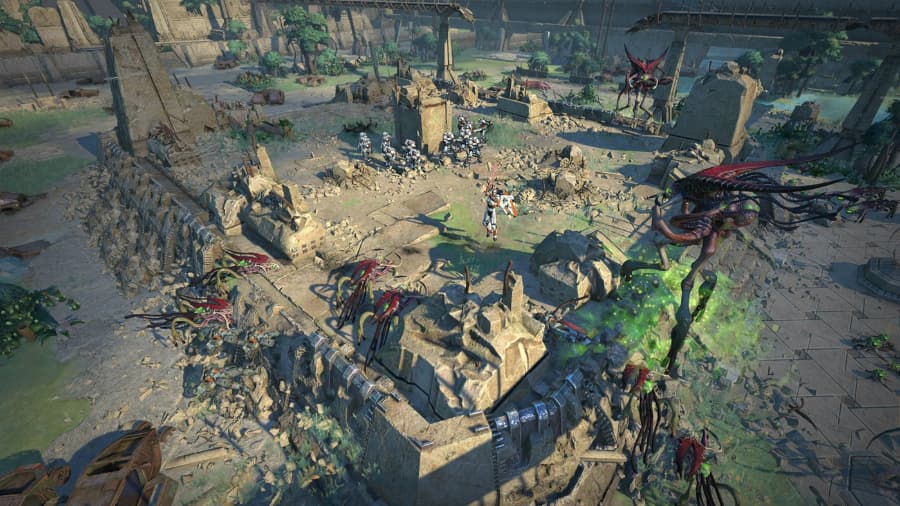 Outside of Age of Wonders: Planetfall‘s many campaign maps, Skirmish mode allows you to chose one of four planet types and set up your own scenarios. You can choose how many factions are in play, the victory conditions and more, allowing for a great deal of replayability. Online multiplayer is also available for those who want to face off against real humans. Whether players take the action online or not though, I’m pretty sure that no-one is going to feel short-changed by Age of Wonders: Planetfall‘s offerings. In terms of content it is nothing but generous.

For console owners, Age of Wonders: Planetfall is a rare treat. It’s not only a 4X strategy game that they can play from the comfort of their couch, it’s a bloody good one at that. It doesn’t do the best job of getting players up to speed, but once they have everything figured out they’re in for what is perhaps the best strategy experience currently available on console. It just requires a little bit of patience and persistence to work through a confusing first few hours. After that, there’s little to disappoint those seeking to display their colony-building prowess.

Age of Wonders: Planetfall is available on PS4, Xbox One and PC. We reviewed the Xbox One version.

Want to support GameSpew? Buy Age of Wonders: Planetfall using our Amazon affiliate link. It won’t cost you anything extra, but we’ll get a small slice of the purchase.