England may well still be buzzing from the incredibly dramatic Cricket World Cup win in July, but Big Ant Studios’ Cricket 19, released earlier this summer, swung cricket into the mainstream attention like a fast bowl from Jofra Archer well before that stunning victory.

Cricket 19 is the official game of the Ashes Series, but there’s so much more to it than that.

It’s the sequel to Big Ant Studios’ slightly mundane Ashes Cricket game released in 2017. Gladly the studio has built on its prior release tremendously with a whole range of new gameplay modes, improved AI, and a better all-around feel for each match.

There’s a variety of game modes available, with the most notable being the career mode, Ashes series, and scenarios. Cricket 19 also offers a World Tour, which is enjoyable, but the lack of real players makes it feel less authentic than it should. Each mode can be played as the men’s or women’s team, but only England and Australia have the full lineup of real players and likeness, making Cricket 19 primarily a game based around the Ashes rivalry.

Scenarios mode offers a range of unique situations which the player can be thrown in to. This is great for both beginners and experts, with shorter sessions requiring certain skills and expertise. If you want the tension of a Super Over without having to play a whole match first, or to be placed in a situation where sixes are a must, Scenarios mode is perfect for that. There’s more than enough challenges to keep players coming back again and again. 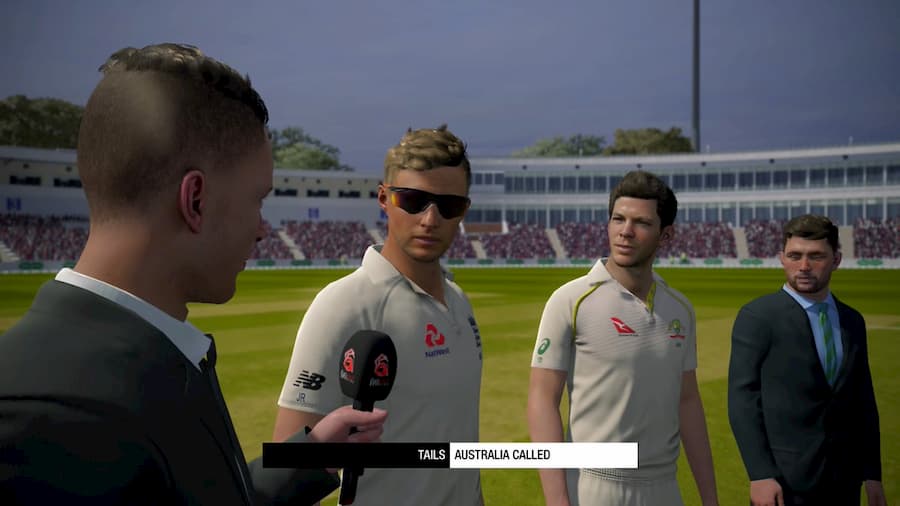 If you want to experience the full match experience, however, this is where Cricket 19 really stands out. Each match opens up with full cutscenes that make it feel just like you’re watching on TV, and you can watch the events unravel before the match even begins. In the Ashes series option the atmosphere really ramps up with national anthems, and a more noteworthy crowd reaction based on how the series is going.

There are even shots of local newspaper stands and the headline based on the series. It’s a nice little touch that creates much more of a ‘buzz’ around each match and makes them feel like real events. 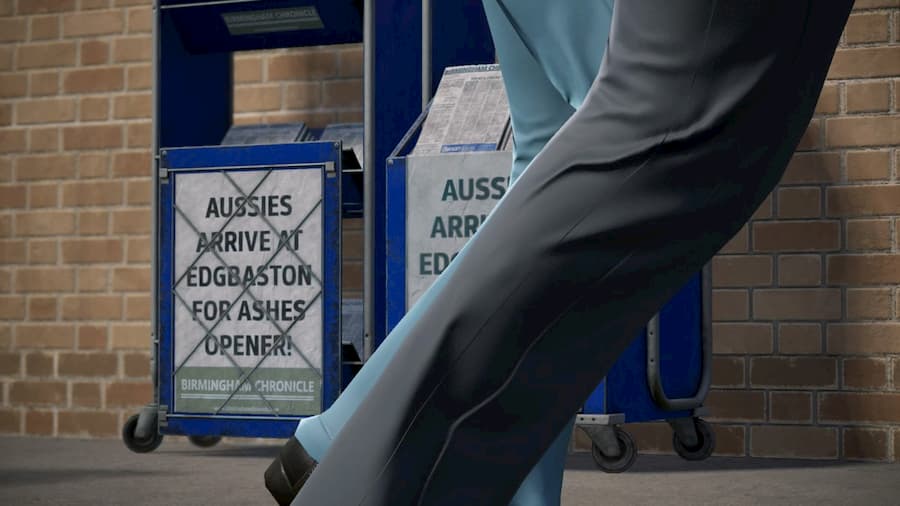 Despite the sense of occasion and realism, Cricket 19 sometimes fails to make the boundary. The graphics are great, and the licensed players look very realistic, but it’s hard to look past their gaunt expressions. In particular, the coin toss at the beginning sees the captains just stare blankly at each other with no change of expression. Cricket 19 includes real grounds, and each is designed with realism in mind. The camera often pans around the ground, and it truly looks spectacular – apart from the fact that the frame rate really suffers. This is a consistent issue with every single camera pan, and it’s really surprising considering the gameplay is so smooth.

The actual gameplay is very simple to pick up and play, but takes a lot of practice. Novice players will be able to collect runs fairly easily, and maybe even hit a few fours, but hitting consistent boundaries and great sixes requires a lot of practice for the perfect timing. Bowling adds its own challenges too, with fielding being the slightly easier of the three, even if it is much more tedious. 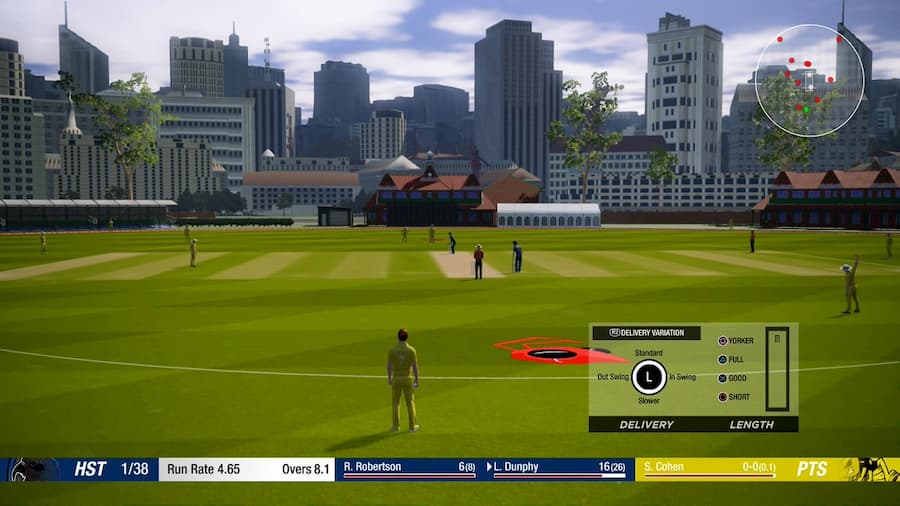 Each game offers the option to play as a single player or the team as a whole. Controlling the whole team means that there’s rarely a dull moment, with there always being something to do when the action switches from batter, to bowler, to fielder. However, playing as a single player can be a slightly more monotonous feeling. Fielding can be very dull when no balls are hit your way, and even when they are it’s a simple task usually of retrieving the ball and throwing it back. Usually the opponent’s AI is good enough to mean that run outs rarely happen.

Bowling, however, is still built on a slower style of gameplay, but is much more varied. You have the option of bowling a normal ball, a yorker, a short bouncer, or a full ball. Throughout the game you’ll get a feel for which you like the most, and the AI reacts to each. If the opponent needs runs quick, expect each bouncer to be played aggressively. You can also control the speed of the bowl based on your timings.

Cricket 19 offers up a realistic portrayal of cricket, and therefore you can’t expect wickets in every single over. There’ll be countless overs where you bowl and there’s only a few runs or it’s a maiden, but this is not an arcade-style game with wickets being taken in highlight format. Some who are new to the sport may find this slightly tedious, but fans of cricket will no doubt find bowling (and fielding, to some extent) to feel authentic and true to the game. 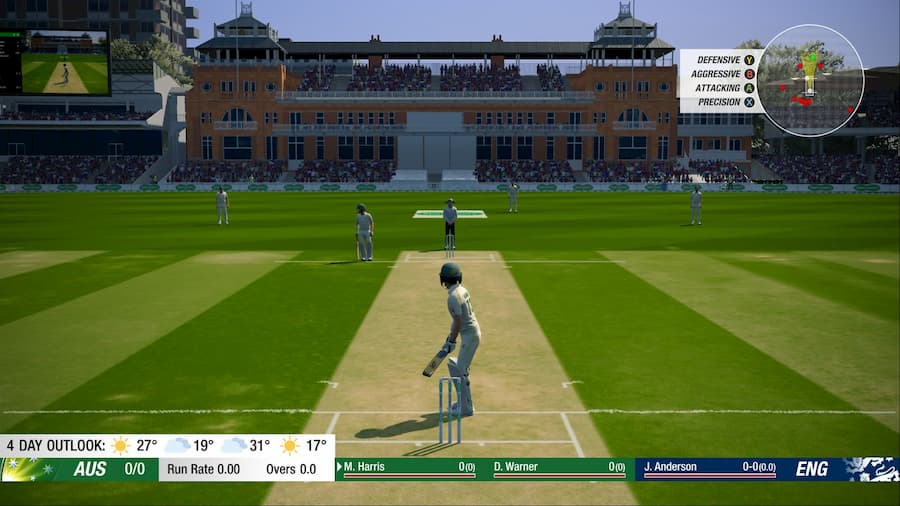 Batting is where all players, cricket lovers or not, will find the most enjoyment. Being on the receiving end of a ball makes each over unique and challenging. Sadly, the AI doesn’t quite live up to the batting here, and you can’t expect some quite simple ‘sitters’ even when the run count is close. Despite this, there’s always the potential to be bowled out or caught if you make a mistake.

Much like the bowling gameplay, batting offers four options: defensive, precision, attacking and aggressive. As you can expect, the more attacking you get, the more likely you are to get caught out. But timing becomes much more key in the batting gameplay, and it’s much more challenging than the bowling technique. You have a split second to make the call on how to hit it, and if you wait too long you’ll be bowled out or receive an LBW is most cases, but if you hit it too soon then the ball will likely either roll to a fielder or be a simple catch. Timing is key in batting, and it’s something that takes a while to master.

Hitting fours and sixes depends on much more than just the timing too. Of course, aggressive hits make them much more likely, but there’s also a small radar in the top right of the screen that shows where the fielders are. If you can find a gap it can be exploited. Again, doing all this in the time given between each bowl makes batting much more tense. 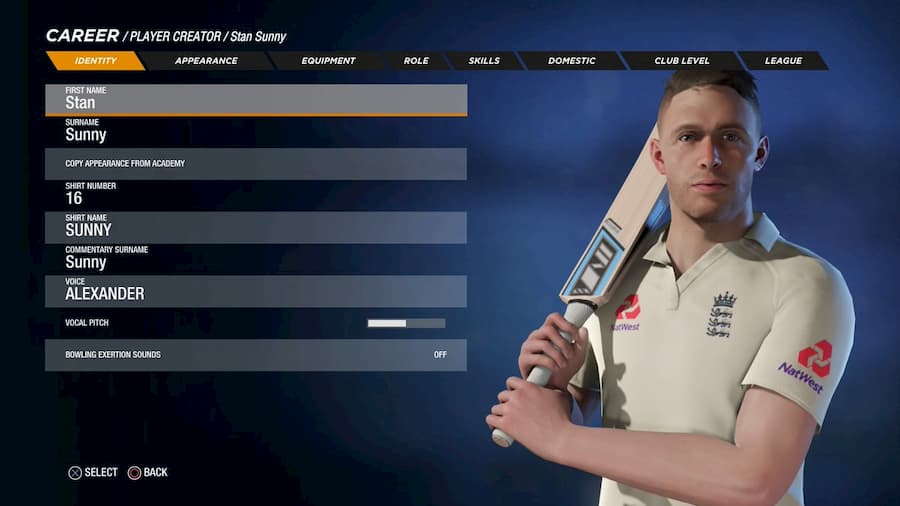 Where Cricket 19 really stands out is in its career mode. You can begin with an unknown prospect, or even create your own character, and take them to glory. There’s a huge range of customisable features, and it’s one of the best player customisation tools I’ve ever used. The variation of options make it easy to get the player you want, and you can fiddle around with the options for hours. Cricket 19 also offers customisation for bats and grounds too, with plenty of options to keep you returning for hours at a time.

Once your player is created, you begin at a lower level team and work your way up. It’s a pretty standard formula for a sports game, but the levelling up system is what makes Cricket 19’s career mode so addictive. Each trait (batting, bowling, fielding) has unique options to unlock and work on, and these make a real noticeable difference in the gameplay. Certain perks can be unlocked at different levels too, and you can really build your ideal cricket player throughout the career mode.

If you play well, it’s noticed. You’ll receive reports about being scouted, and even receive promotions to the role of captain. After each new team there’s a noticeable jump in the crowd and difficulty. Cricket 19’s career mode offers hours upon hours of entertainment. 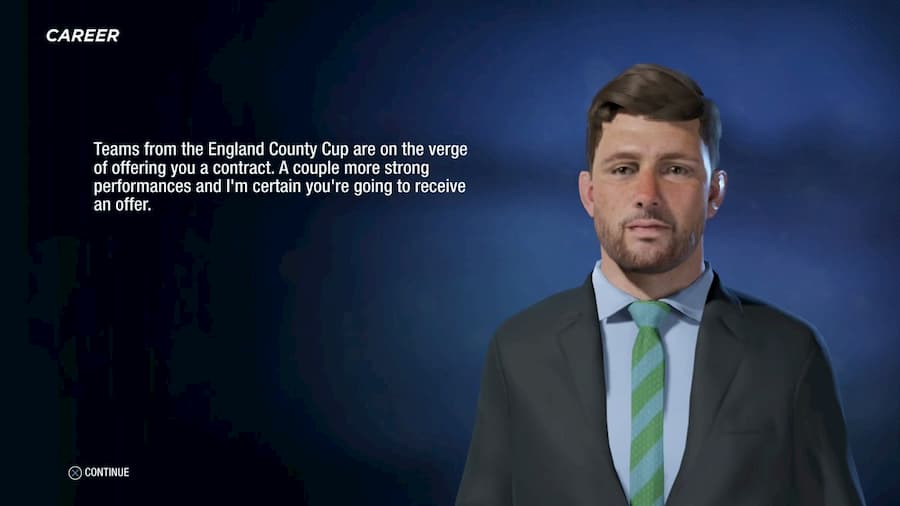 During the season, you can also complete training activities to level up your player. However, there’s very little explanation to these activities, and you can be left not knowing what to do. This is even more frustrating when Cricket 19’s excruciating load times are added to the mix. Whether it’s a match, training exercise, or even scenario loading, it can take well up to a minute, which dents the overall experience – especially when the training activities should be quick-fire rounds. Thankfully there’s no loading times in the actual matches.

Cricket 19 is by far the best cricket game available right now. There’s enough about it to keep cricket newbies entertained while its high level of authenticity will no doubt delight die-hard cricket fans. Even England’s Barmy Army, however, would get quickly tired of the loading times, and may notice the small imperfections to the matchday experiences. Despite this, Cricket 19 is a solid boundary, with the career mode hitting nothing but sixes.

Cricket 19 is available on PC, PS4 and Xbox One. We reviewed the PS4 version.

Want to support GameSpew? Buy Cricket 19 using our Amazon affiliate link. It won’t cost you anything extra, but we’ll get a small slice of the purchase.