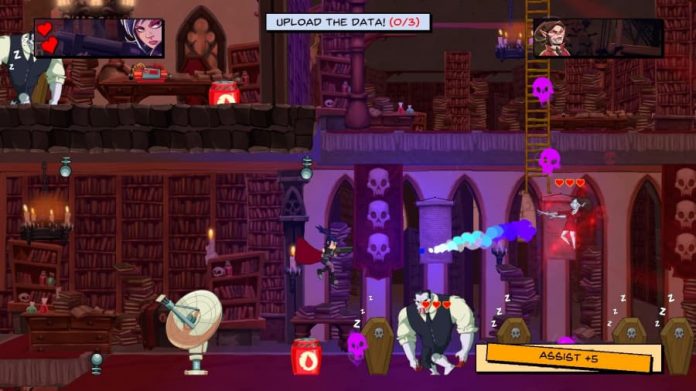 If you’re looking a fast-paced platformer to sink your teeth into, Damsel might just do the trick. But it’s best enjoyed in bite-sized morsels.

Available now on Switch and Xbox One after launching on PC last October, Damsel is an action-packed platformer that pits you against hordes of vampires. As Special Agent Damsel, you energetically run, gun, jump and slash your way through 75 bite-sized levels in the game’s story mode. And after that there’s then an arcade mode to conquer, and Damsel Rush, which serves up a daily challenge. Needless to say, it packs in plenty of content for its budget price.

Sandwiched between story scenes that play out via comic book cells, each and every one of Damsel‘s levels has an objective in story mode. It might be to hack all laptops, destroy all vampires, or rescue all hostages. Whether or not you you rush to complete it or systematically take out all enemies while collecting skulls to score big is up to you; there are online leaderboards for both approaches, after all. The only problem is, after a short while, it all becomes a little samey.

Sure, defusing a bomb requires a little more effort than rescuing a hostage. And that in turn is more trying than simply accessing a control panel. But soon you begin to feel like every level is asking you to do the same thing; find and interact with numerous objects while killing everything along the way. And thanks to Special Agent Damsel’s limited skill set, the action never really evolves as you move from one level to another. The levels just get harder, and with it sometimes a little frustrating. 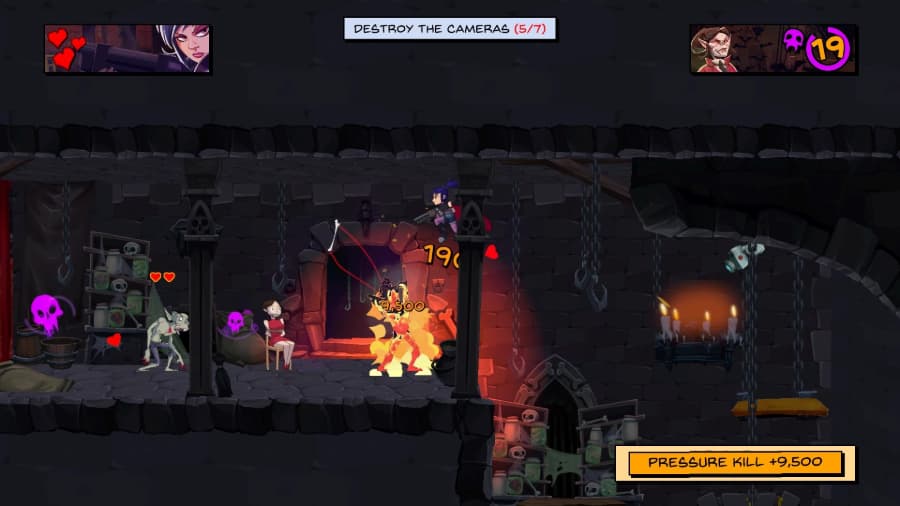 Armed with a shotgun, Damsel can efficiently take care of enemies at range. Once close, however, pressing the fire button initiates a melee attack. The melee attack puts down many enemies with one hit, but stronger foes require multiple blows that makes Damsel‘s close combat feel stunted. For the most part then, you’ll want to tackle enemies from a distance. But you can’t just blast willy-nilly; if you accidentally shoot a hostage it’s game over, and if you happen to shoot a red barrel full of blood, you’re in for a challenge. You’ll soon wish that Damsel had a dedicated melee attack button, and also perhaps a multi-hit combo to go with it.

Damsel‘s levels are full of objects to help or hinder you. Explosive barrels are useful as long as you don’t get caught up in their blast, and the same goes for poisonous barrels that release clouds of gas that seriously weaken anything caught up in them. There are also bolts of electricity that momentarily prevent you from using your shotgun if touched, and security cameras that summon more vampires if left operational. Some hazards, like lasers, can be removed or turned off by destroying terminals or interacting with panels. The trick is finding the best way to deal with the hazards each level throws at you to optimise the time spent completing it.

In small doses, Damsel is indeed fun. Especially once you’ve mastered Special Agent Damsel’s athleticism. She can jump, double jump and even cover a considerable distance with a swift dash. Firing downwards while jumping also enables Damsel to remain in the air for longer, as well as rain bullets on those below. Those with skill will be able to dance through many of Damsel‘s levels, rarely touching the ground as they kill one enemy after another while airborne. And if they collect score boosting skulls in the process, they’ll possibly find themselves climbing up the leaderboards. 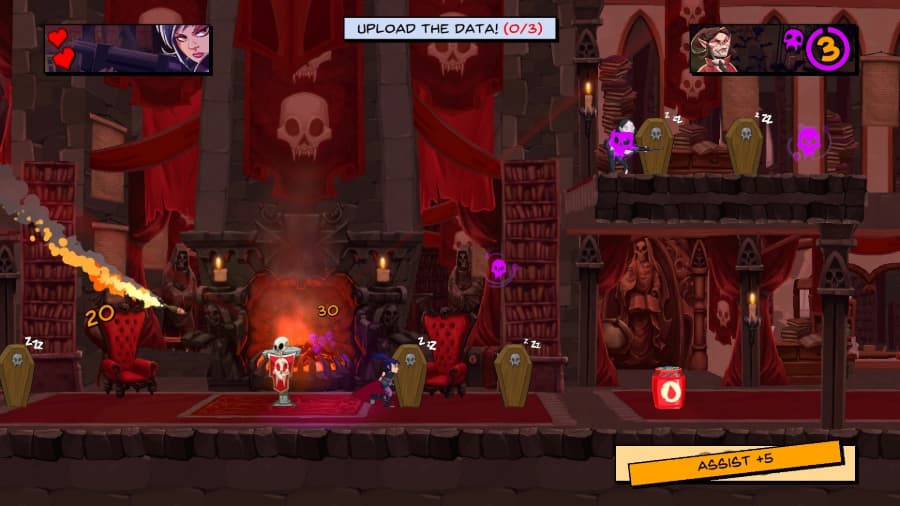 Once the feeling of repetition has kicked in though, it’s really hard to shake it. There really isn’t all that much to distinguish one level from the next, even as you progress from one of Damsel‘s three episodes to another. And switching to the game’s arcade mode doesn’t do much to change things. The levels are still the same, you just find yourself with a limited number of lives to complete them all, and the need to collect skulls while going about your usual business. Damsel Rush, meanwhile, just presents levels as daily challenges.

Damsel is far from being a bad game. It looks nice, controls well, and has a decent soundtrack. But its moment-to-moment action grows tiresome when played for a considerable length of time. It’s a game best enjoyed here and there – a handful of levels at a time – otherwise it just gets overly repetitive and your interest starts to wane. It’s also a game that’s primarily going to be enjoyed by score chasers and speedrunners, eager to take their place at the top of the leaderboards. If that sounds like you, by all means invest in Damsel – you’ll have a good time. If not, however, you’ll get much less out of it.

Damsel is available on Xbox One, Switch and PC. We reviewed the Xbox One version. 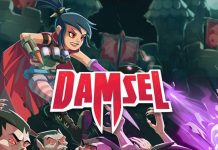 Damsel is an Exciting Platformer About Defeating Corporate Vampires