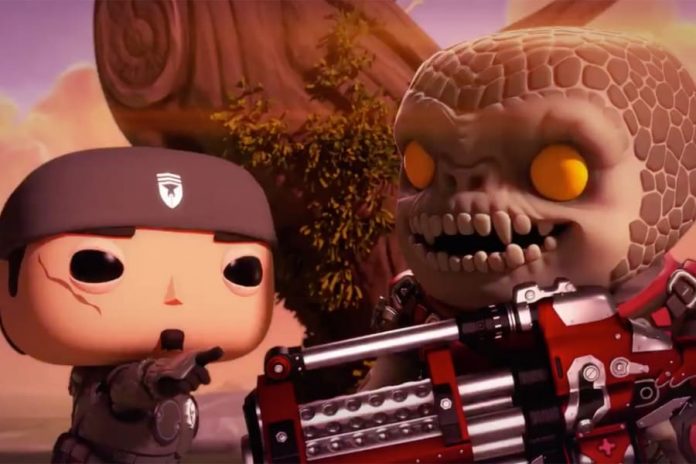 The next big Gears of War game, Gears 5, may just be around the corner, but a new little entry in the series may be worthy of your time during the wait.

Gears POP! is now available on iOS and Android, and if you’re a fan of the Gears of War franchise it’s well worth checking out.

Essentially a simple real-time strategy game, Gears POP! challenges you to make use of the units, called Pins, available to you to take out your opponent. Each player has two turrets stationed close to them though, which offer considerable defence. Take out a turret and you score a point; take out your opponent and it’s game over – you’re the victor. If both players are still alive by the end of a game, then how many turrets are still left standing could be the decider.

To do battle, each player has to select eight Pins. Most of those will be Gears of War characters that they’re familiar with, such as Marcus Fenix or a lowly Locust Drone. Items such as Frag Grenades are also Pins, however. And you don’t have to choose a side in Gears POP!, as both Coalition and Locust forces fight alongside each other.

Gears POP!‘s main mode is Versus, where two players go at it to decide who’s the best. As an energy bar charges at the bottom of the screen, four of a player’s Pins become available to deploy, but they each have an energy cost. Therefore it’s up to you whether you deploy one strong Pin or multiple weaker ones. Your energy recharges rather quickly though, so the pace is fairly fast.

Pins that are characters can simply be drag and dropped onto the field, sending them up either side of the screen where there is ample cover, or down the middle which is clear. Not all units make effective use of cover, after all, and that might factor into your tactics. Pins that are items such as grenades need to be dropped where you want them to land. It’s handy for targeting specific enemies.

Victory in Gears POP! is all about making effective use of your energy and your knowledge of each Pin’s strengths and weaknesses. You need to quickly decide which Pins you’re going to use and where you’re going to place them. You need to think about both offence and defence. To help you along the way, every once in a while you get to use an Ultimate, too. They allow you do such things as create a sinkhole, spewing forth Wretches that swarm on enemies nearby. 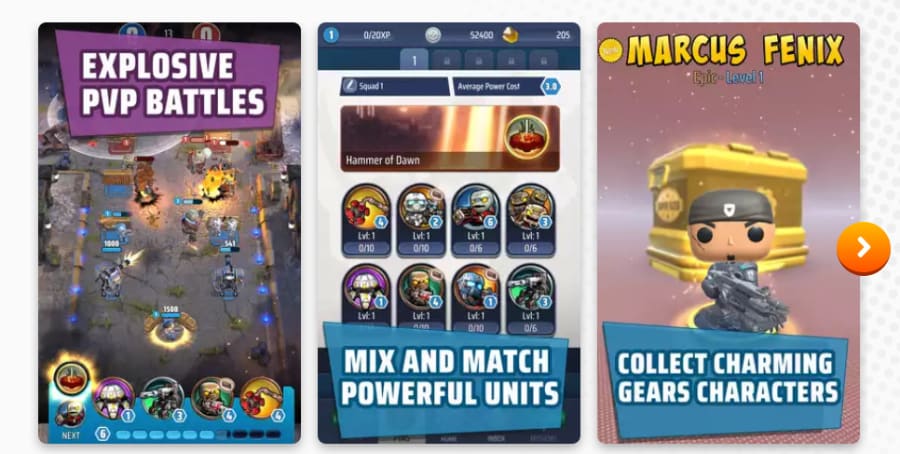 Each Versus match lasts three minutes, though the rate at which energy charges for the last minute is doubled. Needless to say, combat really heats up in that last minute, with both players throwing everything they have at their opponent in order to grasp victory. It’s tense stuff, and also rather exhilarating.

Aside from Versus matches, which award Gear Packs for victories and winning streaks, there’s a Boot Camp mode that allows you to earn coins while learning more about the game. A Practice mode where you can brush up your skills is also included, and a co-operative Horde mode. You’ll need to level up a little before you can tackle that though.

Like any mobile game, there’s an element of pay-to-win. Gear Packs, that contain the coins and Pins you need to upgrade your forces, can be bought as well as won. Coins can also be purchased with real money, as well as Crystals that can be used to open up some of the Gear Packs you win instantly. You can have a lot of fun with Gears POP! without spending any more though. There are daily challenges to complete that should reward most players with all the coins and crystals they need.

Xbox gamers that are into achievements will be happy that Gears POP! has a full 1000 points to unlock. All they have to do is sign in with their Xbox Live account and they’re all set. We wouldn’t be surprised if rewards such as skins for Gears 5 become available within Gears POP!, too.

So, if you like Gears of War and want a game that will occupy the small bits of spare time that you have, give Gears POP! a try. It’s free-to-play and surprisingly fun.