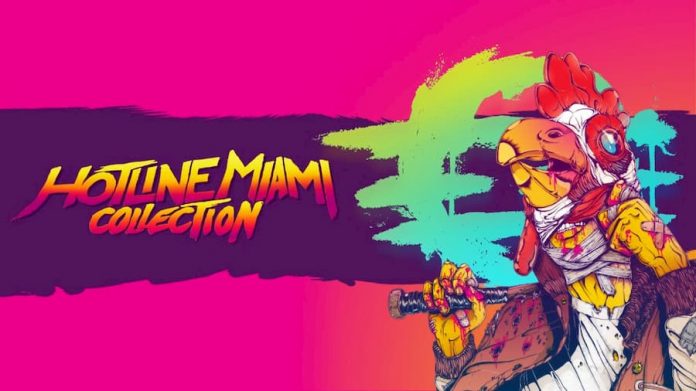 When I first played Hotline Miami, I was horrible at it.

I quit after 10 minutes. But then picked it back up after another 10 minutes – and kept on playing for three hours. That’s how Hotline Miami gets you. It makes you feel bad about yourself and then consistently brings you back for more.

The experience doesn’t change just by moving the game to a different console, either. After playing dozens of hours of the game on PC, I couldn’t wait to get my hands, pun-intended, on the Switch version. And it’s just as much fun as it ever was.

Hotline Miami is a top-down shooter from developer Dennaton Games originally released on PC back in 2012. It takes place in 80s Miami, where selling drugs, murder, and all other manner of horrific illegal activities are being committed left and right – by you. You start the game by taking on the role of a man known as “Jacket” who has to perform a hit on the Russian Mafia.

The Hotline Miami Collection release on Switch packs in the original game along with its sequel, Hotline Miami 2. The sequel takes place both before and after the events of the first game. Players will be reintroduced to Jacket who has been arrested and brought to trial, but the story bounces around between many different characters. It’s a winding narrative with a lot of cursing, blood, violence, guns, melee weapons and completely badass carnage. What more could you want? 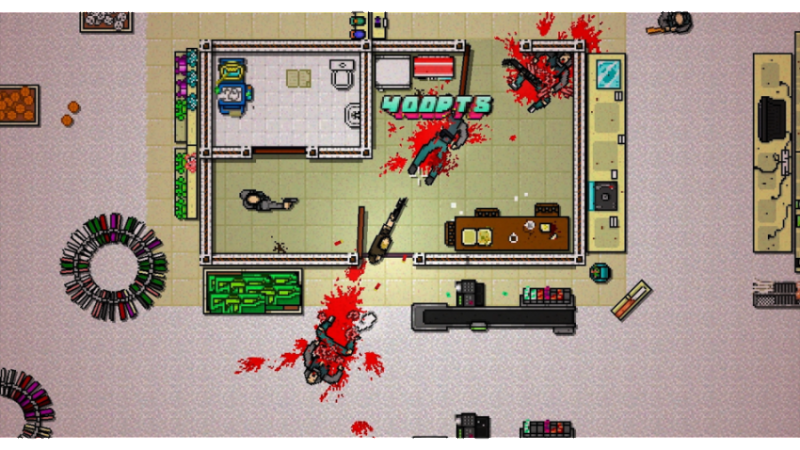 In Hotline Miami you start by choosing who you’d like to play as. Each character has their own special ability. I’m a fan of the zebra mask which lets you perform the occasional roll – it tends to help me when I’m in a tight scrape. You’ll proceed through the level killing (or avoiding) everyone as well as you can. Melee weapons are the best way to take care of the situation because guns will draw all the thugs to you. That being said, sometimes firepower is the only option and you’ll have to improvise to try and make the best out of a bad situation.

In the beginning, levels are pretty self-explanatory: clear out the first floor of all the thugs, and proceed to the next floor. Rinse and repeat. As you continue, things get more complicated. You’ll come across heavy enemies – huge, hulking dudes that refuse to go easily – as well as guard dogs that charge at you. The further you press on, the more you’ll notice that things are different each time you start a new level. Enemies are often predictable, but the second you think you’ve got everyone’s patterns down to a tee, you’re like to be taken by surprise. 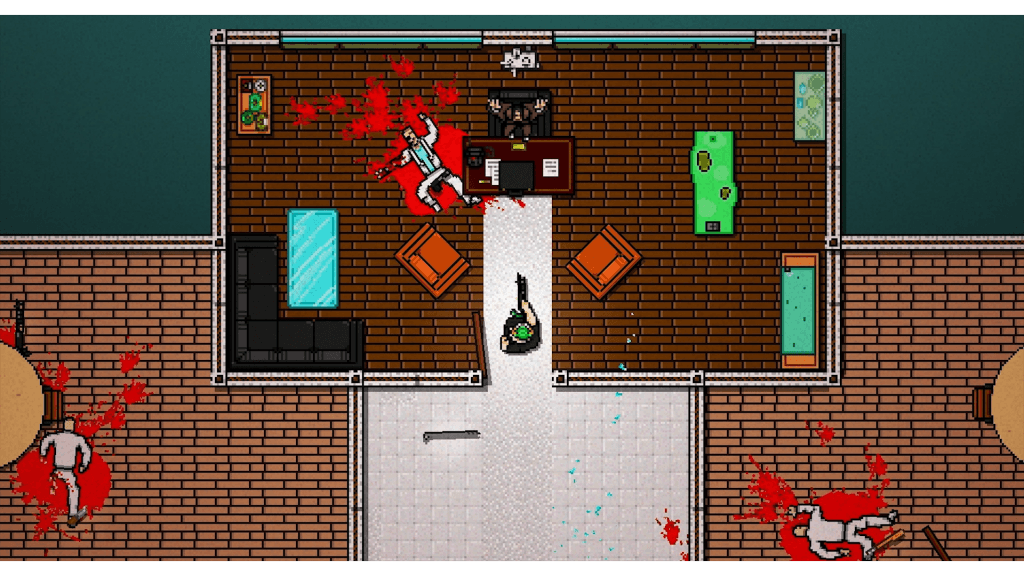 And you’re going to die a lot. It’s the inevitability of Hotline Miami. It’s a game of trial and error. Go left, take out three or four enemies and then suddenly a giant dude with a shotgun comes around the corner. Suddenly, it’s very clear that your current approach isn’t the proper way to handle the situation so you’ll be forced to switch tactics. Hotline Miami is not only a fast-paced shooter, but it’s a strategy game as well. You can’t always just run into buildings all-gun-blazing because you’re going to run out of ammo or get ambushed. You have to continuously try again until you find the perfect path to victory. It’s an ingenious system that will have you trying a million different ways to reach the end.

That quick-fire gameplay makes it perfect for the Nintendo Switch. Complete a few levels while the kettle is boiling or the adverts are on. Practice a few new tactics on your morning commute. As to be expected, the Hotline Miami Collection offers little new from the previous release of the games. The levels, characters, enemies and weapons are all the same and there aren’t any new surprises waiting around any of the many, many corners. Both games look fantastic in all their pixel-art glory on the big screen as well as on the Switch’s screen in handheld mode. If, like me, you’ve only ever played Hotline Miami on PC before, you may need a few minutes to get the hang of the console controls, but it doesn’t take long until it’s second nature.

Needless to say, The Miami Collection finds a welcome home on the Nintendo Switch. Fans of both games will find the same violent, hard-as-nails adventure with its fun, freaky 80s soundtrack. The first Hotline Miami remains one of the greatest indie games of all time, and having the second (also great) game included in one package makes for the perfect way to play, especially if you’ve somehow missed out on the franchise so far. If you’re looking for a game to both frustrate and entertain while on the bus or on the sofa, then Hotline Miami  Collection should be your first pick.