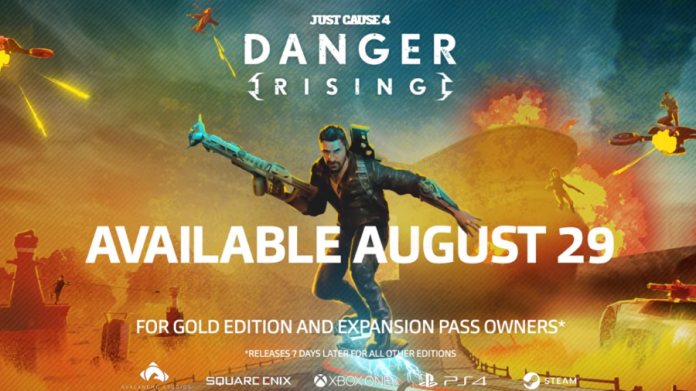 The new downloadable content pack is bringing even more madness to Just Cause 4, already one of the maddest action games around. It’ll be available as part of the Expansion pass and to owners of Just Cause 4‘s Gold Edition.

Unfortunately, as Rico’s deadly arsenal grows, so does the threat he faces. Danger Rising makes Rico confront his past, he vows to take down the Agency after learning they betrayed him. The highly trained Agency operatives you face can grapple across the land just like Rico, presenting new unique challenges.

Just Cause 4: Danger Rising will be available to owners of the Gold Edition on August 29th, and will be coming to other editions of the game seven days later. Watch the new action-packed trailer below:

Just Cause 4 is available on PlayStation 4, Xbox One and Steam.

Want to support GameSpew? Buy Just Cause 4: Gold Edition using our Amazon affiliate link. It won’t cost you anything extra, but we’ll get a small slice of the purchase.