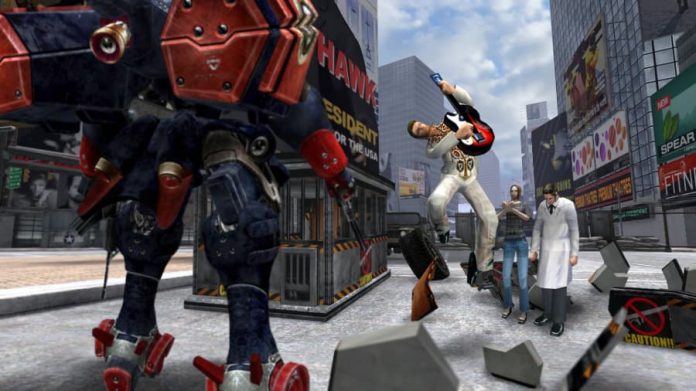 Nearly 15 years old, now’s the perfect time for Metal Wolf Chaos XD to be released in the West.

While most people will associate FromSoftware with Dark Souls, those familiar with the company will know that it developed a varied range of titles before it struck gold with its particular action RPG formula. Metal Wolf Chaos is one of them, from a time in which FromSoftware and Microsoft cosied up with each other to try and make the Xbox brand more popular in the east. But it didn’t work, and so Metal Wolf Chaos never made its way to the west and became a rarity. The original Xbox wasn’t region free, after all.

There’s no doubt that Metal Wolf Chaos‘ limited availability helped to make it a cult hit. That, and the game’s utterly ludicrous plot, which is made hilariously entertaining by some of the most hammy voice acting you’ll ever hear. And so it’s no surprise that it has been remastered for modern audiences, even though its gameplay just doesn’t quite cut the mustard compared to modern releases. Metal Wolf Chaos XD is a game carried by its absurdity.

The plot goes something like this: Vice President Richard Hawke, with the backing of the US military, has staged a coup d’état, forcing President Michael Wilson out of his position of power. His reasoning is that Michael Wilson has plunged the country into civil and economic unrest, although Richard Hawke doesn’t exactly seem like of leader that will make things any better. But President Wilson isn’t just going to run away with his tail between his legs, no. Instead, he’s suited himself up with a massive mech suit and is going to take the fight to Vice President Hawke. He’s going to take back control of America. 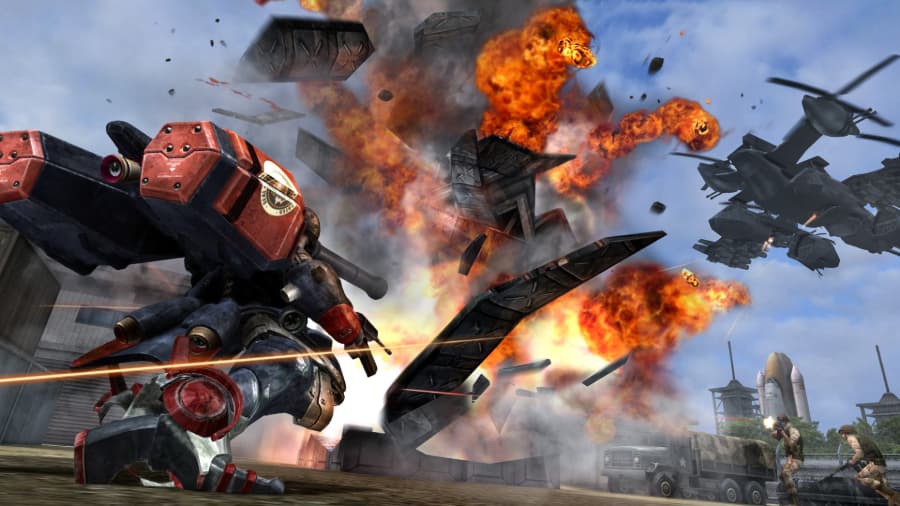 As a satire of the USA and those who are in power of it, Metal Wolf Chaos XD couldn’t have been released in the west at a better time. You have a President that wants to take back his country and make it great again, even though we’re not quite sure that’s what the country really wants. And by the time he’s done, he’ll have destroyed most of it. Then you have a Vice President who wants power but seemingly thinks that ruling with an iron fist is best. The media is on his side too, twisting the catastrophic things he’s done to make out that Michael Wilson is a terrorist. No one really considers the people.

Unfortunately, all the missions you take part in between snippets of story just aren’t as entertaining. After dramatically escaping the White House, you begin to take back America starting with the West Coast. There are a bunch of missions that you can tackle in any order that you want, although they all boil down to completing pretty much the same task: destroy a bunch of military targets. Complete those and then more missions will unlock as you head east. And yeah, you get the idea.

Metal Wolf Chaos XD tries to inject a bit of variety into its missions, but it isn’t enough to make the experience riveting. Each mission has its own environment, but it rarely provides more than a change of scenery. And other than that, the only other factors you’re going to encounter in missions to make them stand out are battles against other mechs and colossal military machines, and the occasional timer. After completing a few missions in a row, Metal Wolf Chaos XD‘s gameplay becomes a little tedious. 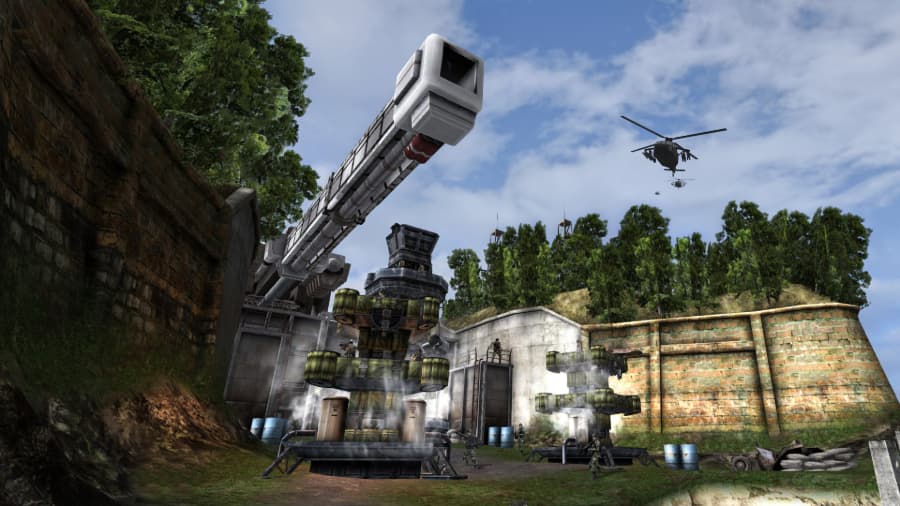 For some reason, piloting a mech with access to a huge arsenal of weapons just isn’t as much fun as it should be in Metal Wolf Chaos XD. It’s perhaps because it’s so grounded and slow-paced. You can dash, but your mech overheats so quickly that it’s best only used to evade enemy attacks in an emergency. And you can also use your dash function to fly through the air for a very short amount of time, but you won’t be pulling off any of the snazzy aerial manoeuvres that are demonstrated in cutscenes. For the most part, you’re simply walking and shooting.

Thankfully, there are a hell of a lot of weapons to unlock and equip. Between each mission you can use the money you’ve earned to develop new weapons in each of the classes available. You can then use money and materials to manufacture them. Up to eight weapons can be equipped at any one time – four in each shoulder-mounted pod – although some weapons such as railguns and multimissile launchers take up spots in both pods. With each weapon having limited ammo, however, and the fact that POWs you come across during missions can only be saved by shooting their cages with light gunfire, you need to carefully consider your loadout.

While going straight through Metal Wolf Chaos XD‘s campaign will probably take you under 10 hours, completed missions can be replayed, allowing you to hunt down any POWs that you’ve missed as well as energy cores that are used to upgrade your mech. When replaying missions you can choose to play with unlimited ammo or on hard mode, too. And you’ll want to do the latter if you’d like to give your mech a bit of a makeover. 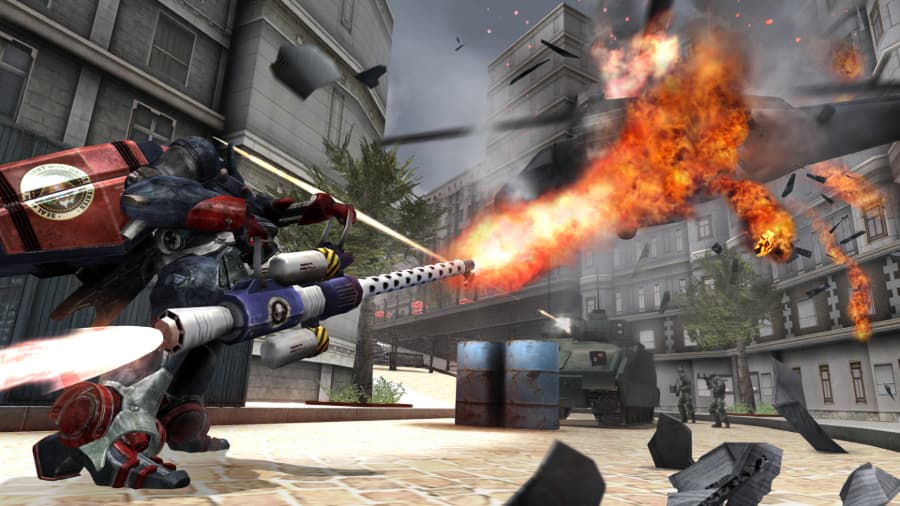 Ultimately, Metal Wolf Chaos XD feels held back by its age. Aside from making it look a bit prettier by boosting its resolution, nothing has been done to make it play better. Most players will be able to live with the game’s dated visuals, but they might object to the clunky controls. And sound quality is atrocious. You don’t really get a feel for any of the weapons as everything just combines into one fuzzy noise during gameplay. I get that General Arcade wanted to preserve the title while making it available to new audiences, but some things needed to be improved.

Recommending Metal Wolf Chaos XD is something that is hard to do. It’s objectively not a very good game. But it’s not unplayable, either, and it’s hard to not get swept up by its overall ridiculousness. Like a movie that’s so bad that it’s actually quite good, there’s something about Metal Wolf Chaos XD that makes you fond of it despite its flaws. So, if you like strange curios and want to unravel one of the craziest stories ever committed to video game form, you should maybe give it a go. Everyone else, however, is probably better off giving it a wide berth.

Metal Wolf Chaos XD is available on PS4, Xbox One and PC. We reviewed the Xbox One version. 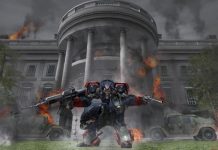