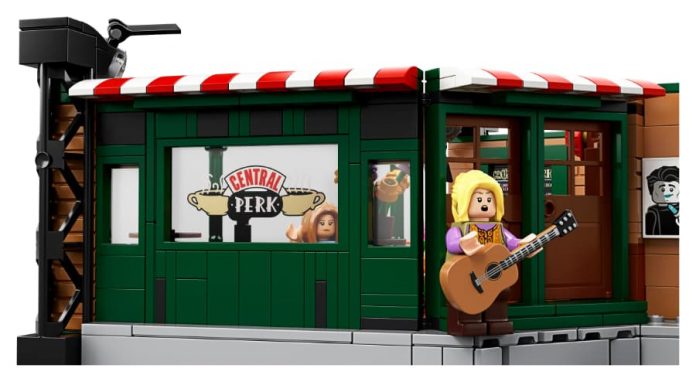 We like Friends and we like LEGO, which means we’re very excited about this LEGO recreation of Central Perk which comes with minifig versions of all your favourite Friends characters.

Available to pre-order via the LEGO Shop right now, Central Perk is the result of LEGO’s Ideas programme. It launches on 1st September, and will retail for £64.99/$59.99. Yeah, those in the UK get the rough end of the stick.

Designed by LEGO fan Aymeric Fievet, Central Perk proved to be very popular with the LEGO community when he submitted it to the LEGO Ideas website. As a result it was given the go ahead by the LEGO Group to be turned into a retail set.

Minifigures of Ross, Rachel, Chandler, Monica, Phoebe, Joey and Gunther are included, as well as the fantastic LEGO recreation of Central Perk. Details include the famous brown couch and two armchairs that the friends spend so much time on, a stage for Phoebe to play her songs, and a window with the Central Perk logo. If you’re a Friends fan it’s a must-have, even if you’re not all that bothered about LEGO.

Made up of 1,079 pieces, the LEGO version of Central Perk is 11cm high, 29cm wide and 22cm deep once built, which means it’s fairly sizeable. Take a look at some shots of the set below.