1The Best PS Vita Games of All Time

To all intents and purposes, the PlayStation Vita is dead.

All things considered, it’s done well to cling on for so long, given that Sony ended first party support for it way back in early 2015. Because of great support from the indie community and a wealth of unusual Japanese titles however, for a legion of gamers, the handheld has remained cherished.

But now there’s the Nintendo Switch, which instantly stole some of the Vita’s thunder when it launched in 2017. Perhaps as a result, Sony announced in 2018 that hardware production of the Vita would cease, and the last Vitas rolled off the production line in March 2019. And while some games are still getting released on the ill-fated handheld, they’ve been strictly indie titles for some time, and even those have slowed down to a trickle.

Before we say goodbye to the Vita though, we thought we’d celebrate its life by giving a shout out to the games we feel are the best available on the format. If you own, or are thinking about buying a PlayStation Vita, these are the games you should definitely own. 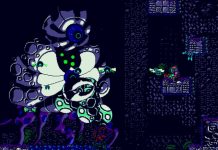 Outbuddies is Another Metroidvania Labour of Love