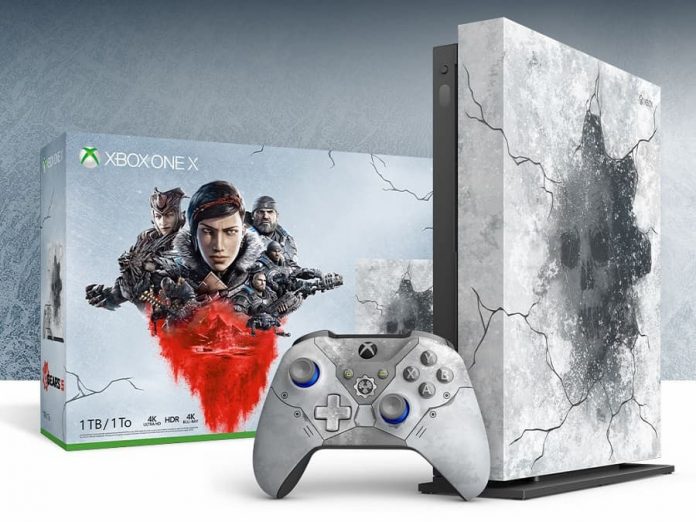 I’ve already got an Xbox One X, I don’t need another one. But then why am I so tempted to pre-order one that comes bundled with a copy of Gears 5?

Because it’s a snazzy-looking limited edition one, that’s why.

Revealed yesterday via Xbox Wire, the Gears 5 Limited Edition Xbox One X console is absolutely gorgeous. And not only that, but it’s also a pretty good bundle. Alongside what is perhaps one of the most impressive limited edition consoles ever to be released, you also get a limited edition Kait Diaz controller, Gears 5 Ultimate Edition, Gears of War Ultimate Edition, and Gears of War 2, 3 and 4. Ice Kait and Ice Jack character skins are also included, as well as one-month Game Pass and Xbox Live Gold memberships. And it costs just £449.99/$499.99.

You only have to look at the Gears 5 Limited Edition Xbox One X to see why it’s so desirable. The top part of the case has a snowy, icy appearance, and etched cracks lead to a skull that looks like it is submerged. That’s because the console features never-before-seen translucent casing. There’s also a Locust symbol on its underside, which is pretty pointless but still a nice touch. Watch the video below to take a good look at it. But be prepared to want one after doing so. It’s available to pre-order right now via Amazon, and releases on 6th September.

Alongside the Gears 5 Limited Edition Xbox One X console, Microsoft is also releasing a range of Gears 5 branded accessories.

Those not picking up the Gears 5 Limited Edition Xbox One X console will be able to buy the limited edition Kait Diaz controller separately, and there’s also going to be a matching charging stand for it. Seagate is making a limited edition version of its 2TB Game Drive, which comes with a one-month Game Pass Ultimate membership and some Gears 5 DLC. And finally, Razer is not only releasing a Gears 5 branded headset, but also a wireless keyboard and mouse. You can find out more about them over on Xbox Wire.

Want to support GameSpew? Preorder Gears 5 or the Gears 5 Limited Edition Xbox One X using our Amazon affiliate link. It won’t cost you anything extra, but we’ll get a small slice of the purchase.