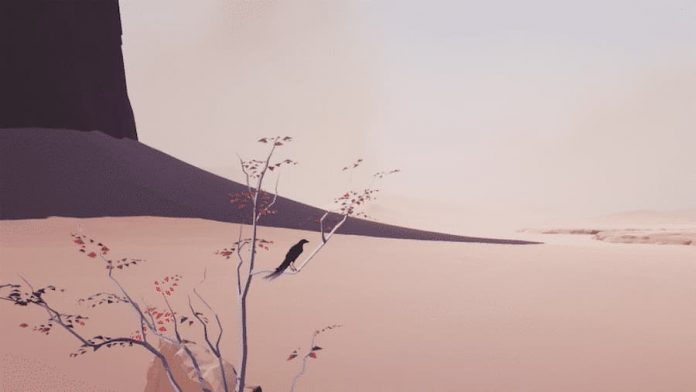 There aren’t a lot of games that encourage you to figure everything out on your own.

Most games have strict rules or a linear storyline that you follow from Point A to Point B, but adventure game Vane from developer Friend & Foe Games truly lets you take the metaphorical wheel and forge your own path. Released earlier this year on PS4, it’s now available to a new host of players on PC.

From the moment you start up the game you’ll be thrust into a collapsing world that threatens to hurt you at every turn. Suddenly, after reaching what feels like the steps to safety, you’ll be transported into the body of a crow, soaring across an expansive desert.

These moments of flight are truly peaceful and make up a large portion of the game. You’ll be tasked with flying around to different vanes and gathering your fellow birds together at these locations. From there, you’ll be given a vague idea of where you’re headed next, but there’s a chance you may get lost along the way. Not to fear; Vane does give you some direction in the form of shining areas that you’ll spot while flying around. It will only be a quick glimmer here or there, but it it’s enough.

That said, I found flying in Vane to be so relaxing that getting lost wouldn’t be so bad.

When you aren’t flying around Vane‘s crumbling world, you’ll be wandering as a young human solving puzzles. Through completing these, you’ll begin piecing together what’s been happening to cause the world to end up in such a fragile state. There will still be some things that remain a mystery thanks to the lack of dialogue in the game, so expect to use your sweet, sweet imagination to put the story together.

When it comes to the puzzles, I did get stuck a few times. Vane relies heavily on its atmosphere and the player’s exploration that it can be hard to determine where you’re meant to be going or what you’re meant to do. Thankfully, if you persevere, the rewards are well worth the trouble.

The further you progress in this short adventure, the more you’ll discover what the game is about. It’s hard to describe Vane‘s story without spoiling it for those that plan to jump in, but it’s a lovely tale of survival in a world that seems to be working against you. Its puzzles are diverse in difficulty – some difficult, some very easy – and its open-world is lovely.

It’s a gorgeous adventure with a story intriguing enough to keep the curious player invested all the way through.

Vane is available on now on the PlayStation Store and PC via Steam.