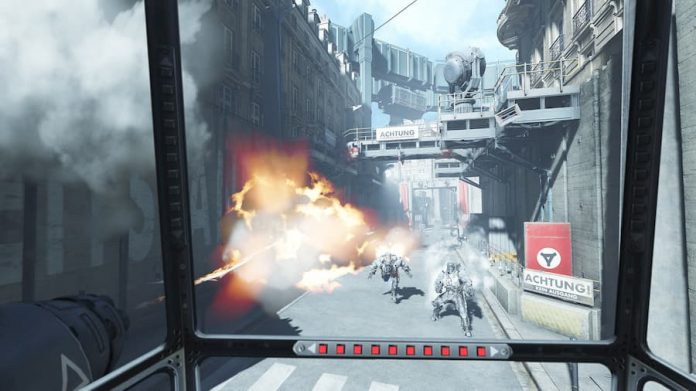 Virtual reality, giant robots and Nazi slaughter: could there be a better recipe for sheer, delicious mayhem? But Bethesda’s burnt dinner and hasn’t even had the decency to order a pizza.

I’m not privy to the exact origins of Wolfenstein: Cyberpilot, though both Machine Games and the usually brilliant Arkane Studios had a hand in its creation. I’d guess that someone, perhaps at a loose end, wondered what a VR Wolfenstein game would be like. The idea was kicked around and a technical demo was created to show the potential of the idea.

At this point someone from marketing wandered past and, seeing the demo in action, decided they could sell it.

Despite protestations from whichever small team was working on it, explaining that it was just the seed of a game, Dave Moneyman (that’s his real name) kicked the idea upstairs and one voluntary crunch period later, Wolfenstein: Cyberpilot was born.

I stand by this imaginary explanation because, while Wolfenstein: Cyberpilot does deliver occasional bursts of fun, it’s a bland sliver of a game. If it wasn’t for the voice briefings, which provide little in the way of motivation, you could be forgiven for thinking you were playing some kind of pre-alpha demo. The game, which sees you controlling one of three war machines, has a mere four missions and somehow manages to make killing Nazis very dull. 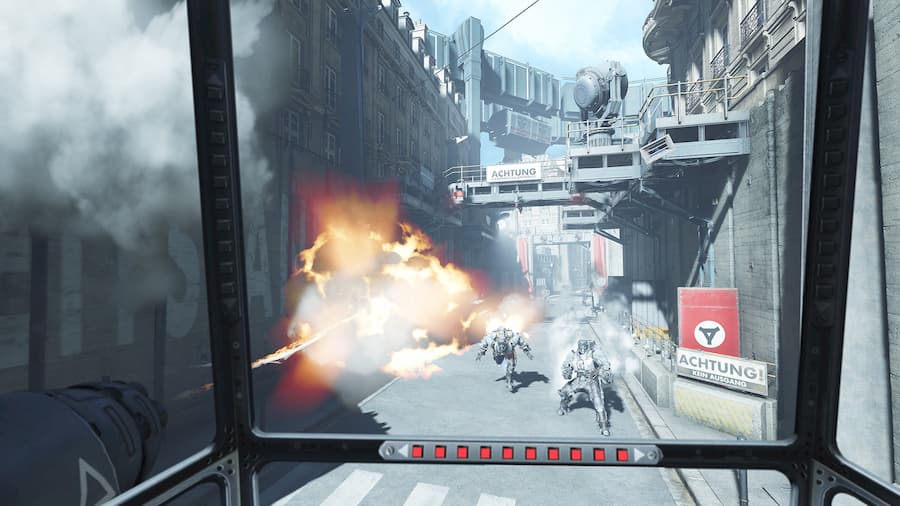 The game starts off on a strong note, with your anonymous pilot surrounded by an appealing array of buttons and levers. Poking and prodding the various items within reach kept me amused for a good five minutes; crowbarring open the back of a robotic dog and then hurling the tool down a lift shaft is rather fun. Pitching Nazi action figures into the darkness proved equally as entertaining, but when I got out into the “real” world, things went downhill.

The first note of disappointment in Wolfenstein: Cyberpilot is that, if you use a pair of PlayStation Move controllers, your on-screen controls are… a pair of stylised PlayStation Move controllers. I was looking forward to manipulating all manner of buttons and levers, like a simplified tank, but the game mostly denied me that pleasure. It’s far easier, and more immersive, if you control your robot using a DualShock 4 controller; it at least makes you feel like you’re steering it.

Cyberpilot’s levels, which are set in Nazi-controlled Paris, are disappointingly samey. So much so that it’s remarkably easy to get turned around even though the levels are basically linear. You’re either roaming through the city streets, a section of Metro tunnel, or an underground lab, sections which are repeated throughout the game’s brief run time (the whole game can be completed in 90 minutes). 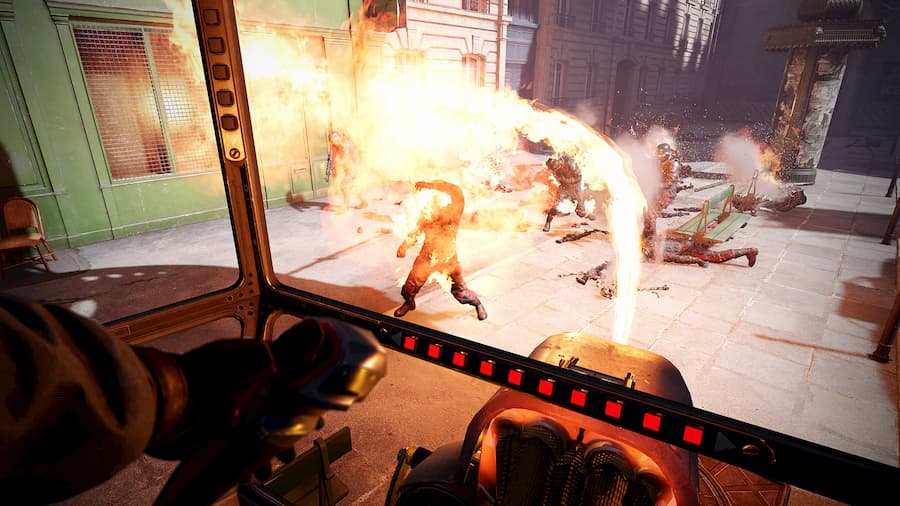 There’s no real drive – emotional or otherwise – behind your mission in Wolfenstein: Cyberpilot, with only a wisp of a plot. The prospect of bathing Nazis in flame may be initially appealing, but foes do so little to get out of your way, when they’re aware you’re an enemy, that mowing them down becomes a chore. The game’s massive Zitadelle robots are easily annihilated, not because of any real skill on your part but because they never strafe and often stand stock still while you blast them to scrap.

The game’s stealth-based mission does provide a break from the tedium, however. Sneaking around an underground lab in a drone, frying your foes before they know you’re there, is a fun little diversion. But it’s over all too soon and before you know it, you’re back in command of a clunky war machine. Cyberpilot expects you to be excited that you’re now (virtually) aboard a Zitadelle but you’re still penned in by the city streets so you’re denied the chance to engage in any large-scale mayhem.

Wolfenstein: Cyberpilot really should not have been a standalone release; at the very least it should have been bundled in with the superior Wolfenstein: Youngblood. There are glimpses of potential here, but it’s lacking nearly everything that makes Wolfenstein fun. Gunning down Nazis in a virtual reality mech might sound like a lot of fun on paper, but the reality completely misses the mark.

Wolfenstein: Cyberpilot is available on PC and PS4. We reviewed the PS4 version.