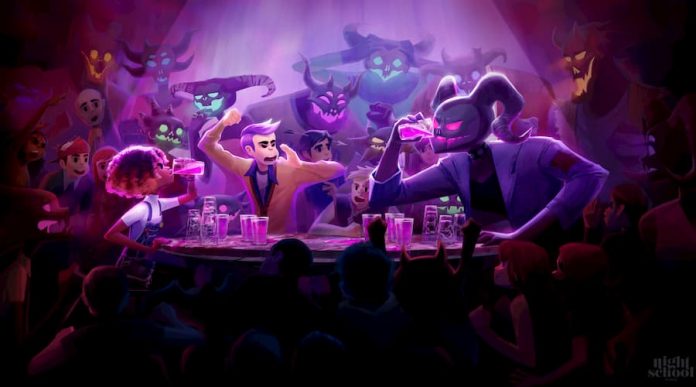 Arriving just in time for Halloween, Afterparty is an upcoming adventure game from Night School Studio, centred around two buddies trying to bargain their way out of Hell.

Lola and Milo are best friends who are, unfortunately, recently deceased. They find themselves facing the prospect of an eternity in Hell, but they do have one hope: beat Satan in a drinking contest and he will let them return to Earth.

Afterparty is brought to us by Night School Studio, who previously developed the acclaimed graphic adventure Oxenfree. The new game promises an intelligent conversation system which allows players to influence the path of the story, an expansive underworld with a network of islands connected by the River Styx, a cast of colourful characters and more.

Dance-offs, beer pong, chugging contests and other demonic activities – set off on the bender to end all benders, work out the mystery of why you were eternally damned and then drink Lucifer under the table.

Afterparty will be coming to PlayStation 4, Xbox One, PC and Mac OS on October 29th. The game will also be included in the Xbox Game Pass from day one, so those who already have a subscription will be able to play it for no extra cost.

Check out the Afterparty teaser trailer below, or get even more info on the Night School Studio website.