Powerstar Golf has one major advantage over every other golf game on this list: it’s free. Yup, developed by Microsoft Studios, Powerstar Golf released at the launch of Xbox One with a free-to-play version. Of course, the free version is a little watered down; it contains a “selection” of events, and at least one hole from every course rather than the whole thing.

But hey, for free, we can’t complain. Powerstar Golf isn’t a particularly serious golf game on Xbox One either; its cartoon aesthetic makes it stand out as a fun, arcade title. That’s not to say it’s an easy hole-in-one though; you’ve still got to hone in your skill to get good.

There are leaderboards so you can compete against your friends as well as local multiplayer options. After all, golfing is meant to be a social activity, right? 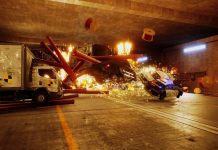