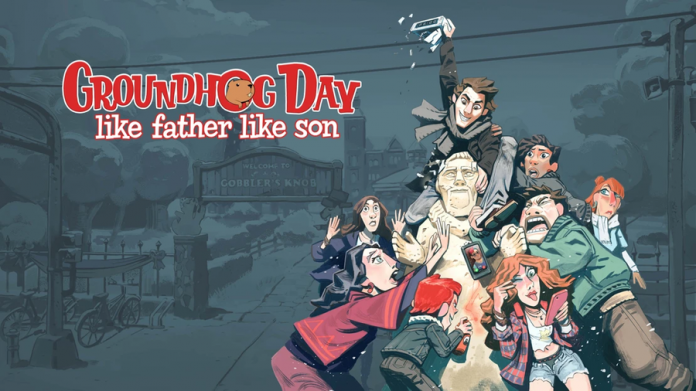 Phil Connors is dead. That’s Groundhog Day: Like Father Like Son’s opening gambit and it doesn’t get much better from there on in.

That narrative bombshell will have less impact if you’re not a fan of the original Groundhog Day, a classic 90s movie that has Bill Murray (as Phil Connors) reliving the same day over and over again. Killing off the movie’s main character might make financial sense (removing the need to hire Bill Murray) and it does set up the intriguing premise of a son unable to escape his father’s shadow. But it’s the most radical thing Groundhog Day: Like Father Like Son does and it leaves this VR sequel feeling like a ghost of a game.

Groundhog Day: Like Father Like Son takes place over the course of a single day, as the movie did. You’re cast as Phil Connors Jr, who, visiting his family once in a blue moon, also ends up trapped in a time-loop.

Though unlike Phil Sr., you’re not given the freedom to roam Punxsutawney, the town where the game takes place. Instead, it’s split into scenes; the first has you trying to prevent your niece from driving a truck through the living room wall.

Fail to curtail her accidental rampage and you’ll still proceed to the next scene (usually set in locations from the movie) but the consequences of her actions will remain until the subsequent loop. Succeed and you’ll be given the option to bypass that task next time, but you’ll then be tasked with the next dilemma – fixing your family’s coffee machine – which will have further knock-on effects. 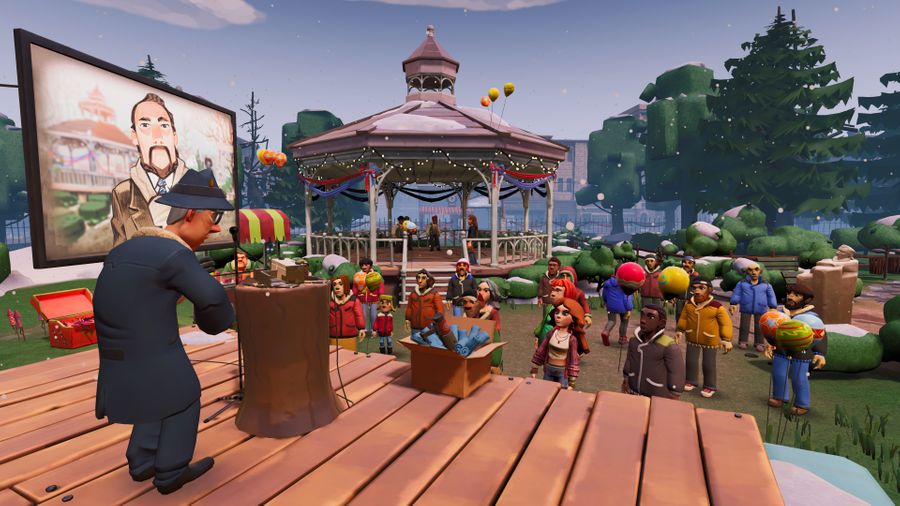 Success typically hinges on completing a VR mini-game, such as using energy balls to destroy coffee beans, or applying the knowledge you’ve acquired in previous loops. These mini-games are a real mixed bag; one minute you’re gleefully firing t-shirts into a crowd, the next you’re wrestling with the PSVR’s technical shortcomings as you struggle to colour in a piece of graffiti (three times).

This isn’t Tequila Works’ first time-travelling tango; the team behind Like Father Like Son was also responsible for The Sexy Brutale, a superb isometric game which also dealt with being trapped in time. But whereas The Sexy Brutale had interesting, sympathetic characters and an engaging storyline, Groundhog Day: Like Father Like Son has little to carry it. Phil Jr. is a thoroughly unappealing individual, unpleasant for the sake of being unpleasant. That wasn’t an issue when you were watching Bill Murray on screen, but here it creates a major disconnect. 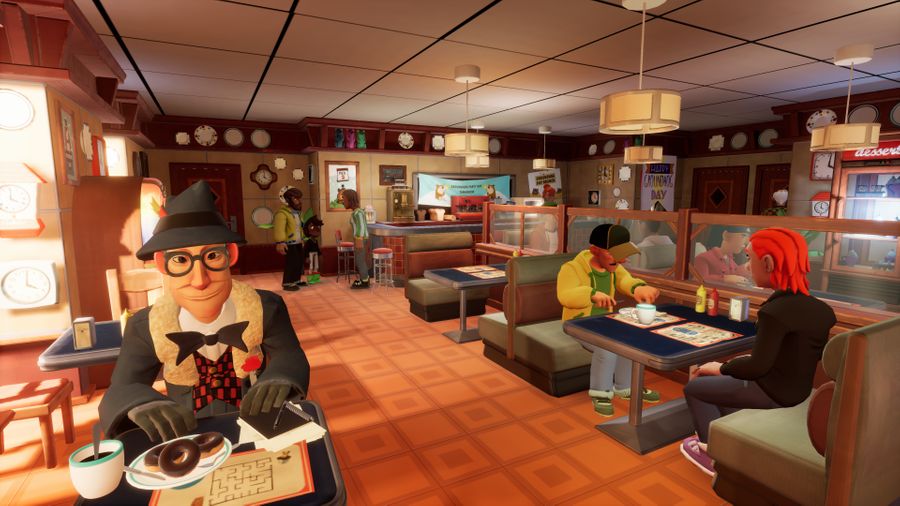 There’s a point in the game when you’re asked to speak about Phil Sr. but you’re only allowed to deride him and his parenting abilities (until you complete a later puzzle). As a fan of the movie, I was forced to stand there, talking about a character I grew to love, as if he was something I’d scraped off my shoe. The game attempts to justify Phil Jr’s viewpoint by giving you flashbacks of “Phil Connors”, but the bearded individual you’re presented with is so different from the movie’s portrayal it’s impossible to mentally connect the two.

Groundhog Day: Like Father Like Son‘s time-looping mechanic allows you to restart each day or scene whenever you want, and you’ll feel a little smug when you divulge information that you shouldn’t rightly now. You’re expected to care about the other non-movie characters the game introduces, enough to fix their problems. But the game relies on Phil Jr’s history with them, rather than having you meet them at the same time Phil does. As a result, you have no real emotional connection to them, or any degree of empathy. The one appealing character in the game is Ned Ryerson; you learn that, despite his jovial manner, he’s struggled as a single father. This and one other scene transforms him from a gag character (as he was in the film) into a rounded, sympathetic individual. 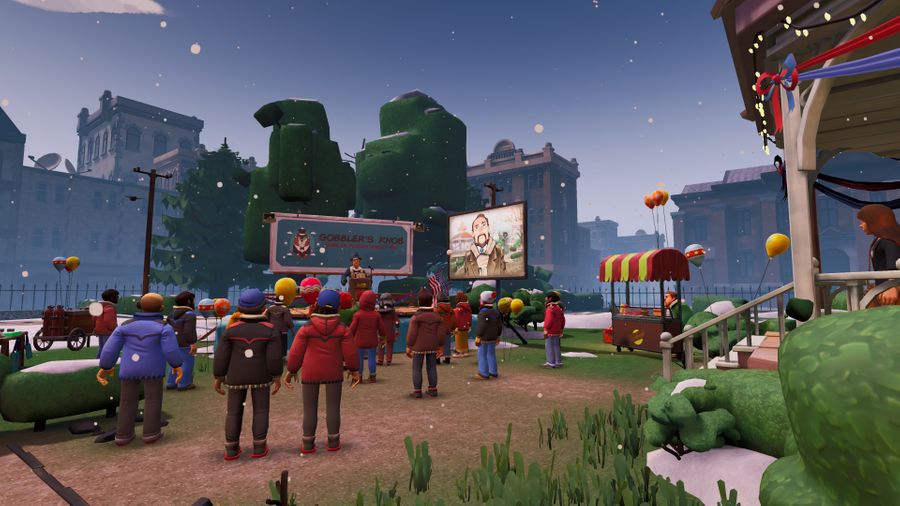 Ned is also the least disturbing person in the game to look at. On the whole, the game’s semi-cartoony graphics are rather off-putting, placing Punxsutawney slap-bang in the middle of the uncanny valley. They’d be fine viewed on the small screen, but it’s quite disturbing to be surrounded by ostensibly “human” characters whose heads are too big for their bodies. I could hardly concentrate on repairing the coffee machine, because every time I turned around, my supposed brother was gazing at me, dead eyes in an oversized, inhumanly chunky face.

Groundhog Day: Like Father Like Son’s saving grace is the mayhem you can get up to when you just forget about the game’s plot.  Just manipulating and messing with objects is an absolute hoot; I was overjoyed to learn that, in Phil Jr’s kitchen, I could put anything into the blender; thirty seconds later I was making bacon smoothies – though, sadly, drinking it wasn’t an option. The hotel bar proved equally entertaining; I discovered that, while conversing with a character, I could grab (and drink) bottles of booze from the bar. My attempts at apologising for the way Phil Jr. had treated her were going well until a green geyser erupted from my mouth.

Watch me cause havoc at breakfast time in a short clip from the game, below:

These shenanigans, however, would be just as entertaining if the game was stripped of its movie license and time-travelling antics. At the end of the day, I’m not entirely sure who Groundhog Day: Like Father Like Son is for. The game undermines the memory of the movie, thus potentially alienating fans. Yet it also regurgitates the film’s plot and relies on it to prop up its bland characters, meaning those who are unfamiliar with Groundhog Day will lose out. The game’s jokes rarely land and it expects you to stand up and clap when it recycles a line from the original movie. Groundhog Day is a film with heart; something that, despite its best efforts, Like Father Like Son is sorely lacking.

Unlike its protagonist, Groundhog Day: Like Father Like Son shows little interest in forging its own identity. If you’re craving a return to Punxsutawney, rewatching the movie is a far more rewarding choice.

Groundhog Day: Like Father Like Son is a VR-exclusive game available on PC and PS4. We reviewed the PS4 version.