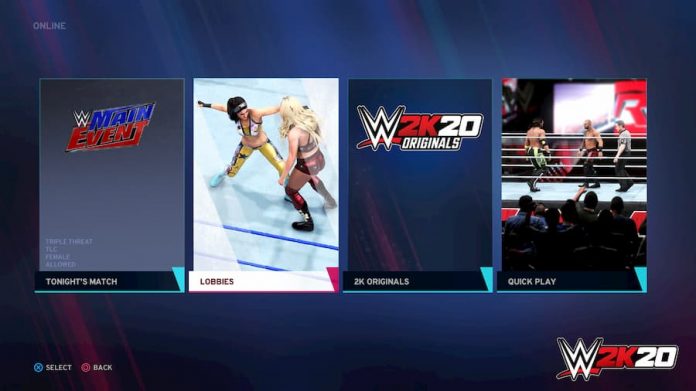 2K has announced a bunch of upcoming online features for WWE 2K20, including the much-requested return of Online Lobbies.

Fans will be happy to hear that 2K is bringing back Online Lobbies in WWE 2K20, streamlining the process of pairing up players and jumping into matches as quickly as possible with no fuss.

This will include the Create a Lobby feature, for people to build the exact matches they want to play. Choose from a wide selection of match types for up to six players. Select your rules, your arena, apply restrictions and select the Superstar gender; then invite your friends to join or open up slots to other players if you decide to.

As well as the Create a Lobby mode, you also have the ability to browse currently available lobbies and a search feature to filter your preferences. If you don’t even want to bother with that, there is also a Quick Play function which will automatically drop you into ready-to-go match.

Other newly revealed features include a “Tonight’s Match” mode, which places you in a new match every day with constantly rotating rules, genders and arenas; this keeps things fresh so there’s always something new to play. The “Road to Glory Featured Match” mode is similar, but also includes potential Triple Threat matches, as well as 4-way or 6-way fights for you to face with both your male and female myPLAYER avatars.

WWE 2K20 is coming to PlayStation 4, Xbox One and PC on October 22nd. You can get more details on the recently announced online features here on the official 2K website.