Talon is the owner of Lon Lon Ranch, and the seller of the famous Lon Lon Milk. Talon has appeared in Ocarina of Time, Oracle of Seasons, Four Swords Adventures and The Minish Cap. He’s a lovable character, even if he is pretty lazy and irresponsible. His cucco mini game for Link is one of the more memorable mini games in the Ocarina of Time.

Talon may also have the most comedic moment in Ocarina of Time when he rushes out from Hyrule Castle after falling asleep. In subsequent releases, Talon manages to fall asleep once again, and even loses the key to his house. Interestingly, in Oracle of Seasons Talon has what looks suspiciously like a “Mario” logo on his red hat. He’s certainly a memorable character, and one that proves the Zelda series does comedy very well. 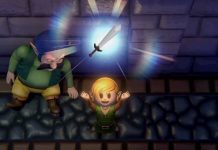