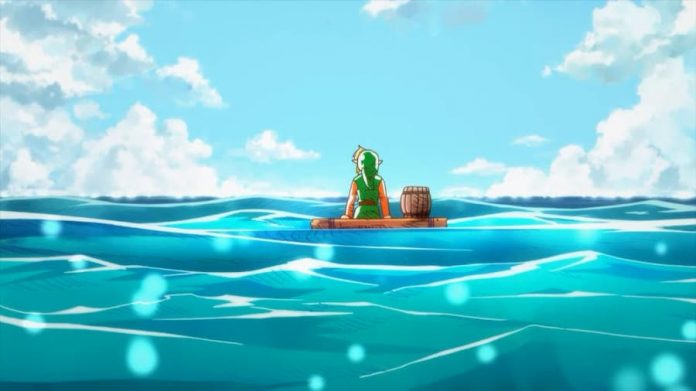 Back in the days before the internet ruled our lives and certainly before it was filled with video game walkthroughs, games used to have hotlines to call when you needed help.

Sure, it was about £1.50 a minute or more, but unless you had a friend who’d already completed whatever game you were stuck on, it was sometimes your only option.

I only ever called one of these hotlines once. It was for Link’s Awakening on Game Boy, and I was about 10 years old. I can’t remember exactly which part of the game it was for; I know it was a dungeon, and I know the solution ended up being frustratingly simple once the person on the other end of the phone told me what to do.

That was the only part I needed help with; everything else, my 10-year old self gritted teeth and knuckled down with, completing Link’s journey and waking up that sleeping Wind Fish. It’s probably why now, some 20-odd years later, playing the remaster of The Legend of Zelda: Link’s Awakening, that I’m so disappointed in myself for needing to consult an online guide about three times. I just have to accept that as a thirty-odd year old, I’m dumber than I was when I was 10.

My own intelligence woes aside though, getting to revisit a game I held so dear as a kid, in a brand-new shiny package, is quite the treat. Remasters are nothing new; in recent years we’ve seen Crash Bandicoot and Spyro the Dragon brought back to life with pixel-perfect HD graphics. But despite the obvious side-by-side improvements, they look just like we remember them in our heads. Back in the 90s, they were pixel-perfect to us, and that’s how they live in our memories. 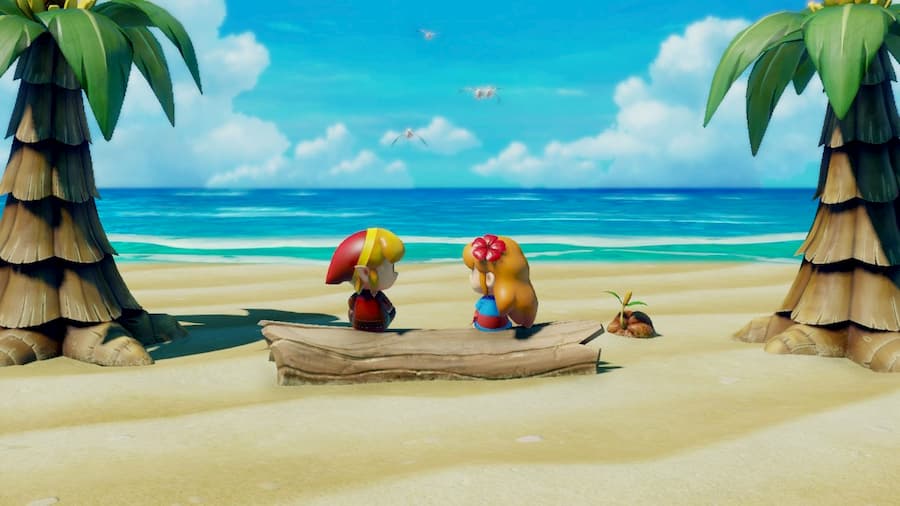 Not Link’s Awakening. Originally releasing on Game Boy, it was black and white; a top-down monochrome world that looks more like a series of line drawings than anything else today. The Game Boy Color version, Link’s Awakening DX came along in 1998 and brought the game to life in full colour, but it was still rudimentary. And now, 26 years after the original, Link’s Awakening has been awakened again – this time fully redesigned from the ground up in terms of its visuals. In terms of gameplay, it’s exactly the game we remember.

The flat, 2D Game Boy world has been replaced with a saccharine-sweet 3D environment. It’s bold, colourful and somewhat shiny; at times, it looks like everything has been modelled out of Play-Doh. It’s a delight to look at, for the most part. Link and his fellow Koholint Island residents are adorable; small doughy characters that bound around this delightful world with abandon. It’s a shame, then, that a myriad of technical issues mars the experience somewhat.

As a stylistic choice (one no doubt led by technical limitations), there’s a blurred vignette applied to Link’s Awakening as you explore its map. Only what’s immediately around Link is in focus. It makes sense in the context of the game, giving a dreamlike and mystical appearance to everything. It is uncomfortable to look at though, at least for a while until you learn to ignore it. As the artificial depth of field effect shifts when Link moves, it creates an annoying ‘shimmer’ effect, which can often draw your eye away from the action. 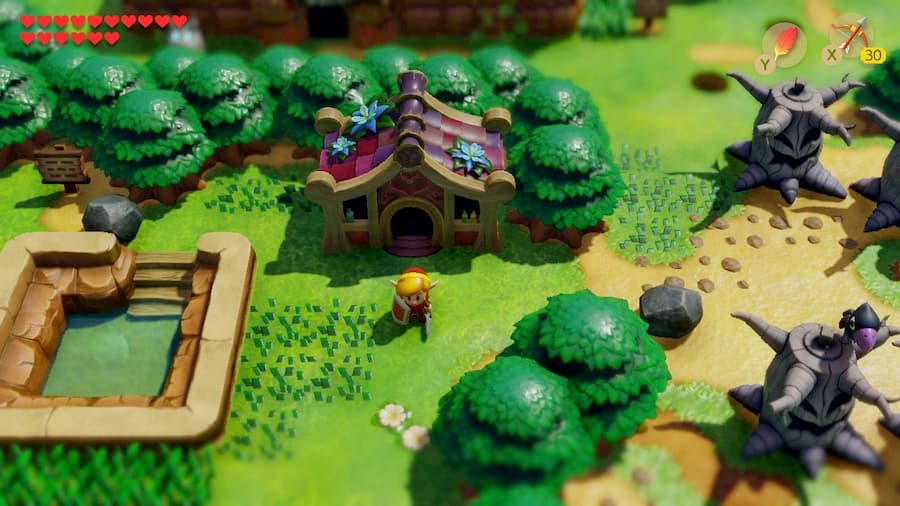 Unfortunately that’s the least of the technical issues. In both handheld and docked mode, there are noticeable framerate drops, causing the game to feel frequently sluggish, especially when exploring the world map. Playing docked on my main gaming TV (4K, 43 inch), I also experienced almost-constant screen tearing, presumably as the framerate continually switched. This, however, wasn’t present when I tried Link’s Awakening docked on my PC monitor (1080p, 28 inch). Its exact cause, then, remains a mystery – but it’s certainly not an issue I’ve had before with other Switch games.

I’m not going to say that those issues don’t spoil the fun of Link’s Awakening, because they do. It’s a 26-year-old game that we could play stutter-free in our childhood. To be able to re-experience it now is quite special, but it’s held back by those frustrations. Of course, it’s still a fun game. It’s still worthwhile playing Link’s Awakening, whether you’ve played it before or not, because it’s still a wonderful adventure. It’s just not quite as wonderful as it should have – or could have – been.

Taking about 10 hours to complete, Link’s Awakening isn’t the meatiest of Link’s journeys. Understandable – it was a Game Boy game to begin with, after all. Those 10 or so hours are packed, though. Whether you’re questing on the world map, talking to residents and find lost treasures, or making your way through the game’s eight puzzling dungeons, it’s hard not to be engrossed in everything the game throws at you. 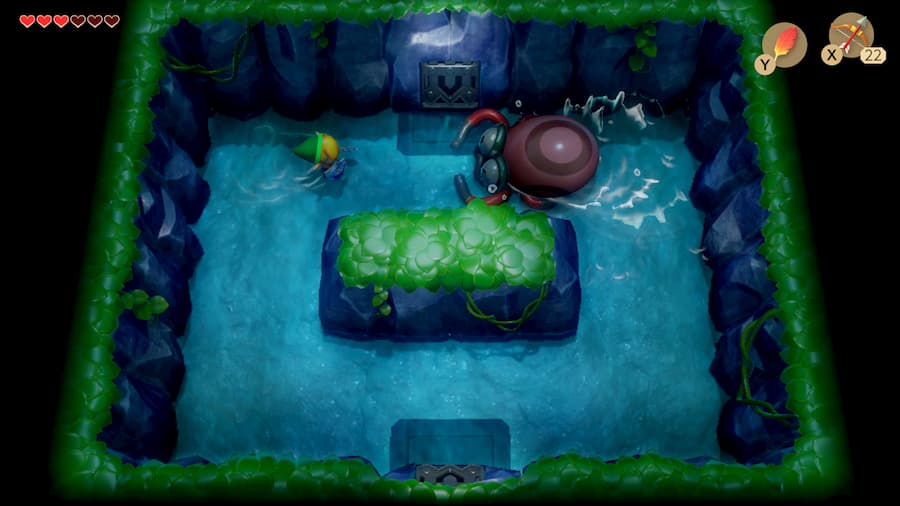 The highlight for me has always been the dungeons. Each one is unique from the last, with its own head-scratching puzzles to get through. There are enemies and bosses, of course, but it’s the puzzles that stand out. As you’d expect, the difficulty ramps up the further you get into Link’s Awakening. Dungeons become more labyrinthine, forcing you to traverse back and forth, looking for that one secret you’ve overlooked. There are switches to change, blocks to push, secret entrances to blow up. You need to keep your wits about you and keep your eyes peeled for every small detail, because it’s so easy to miss one crucial element. That’s how 10-year-old me ended up having to call a hotline, after all.

Each new dungeon rewards Link with a new ability, too. Whether it’s Roc’s Feather that allows him to jump, or the hookshot that can pull him across large gaps, each new piece of equipment you find in Link’s Awakening allows new areas of the world to open up. Being able to jump means you can now cross those mysterious holes in the ground that blocked your path in the Mysterious Forest. Getting the Power Bracelet means you can now lift rocks and access a whole new area of the map. Right down to the last upgrade you receive, there are new secrets you’ll now be privy to, and going back to finally get them – like that heart container you could see but couldn’t reach – is incredibly rewarding. 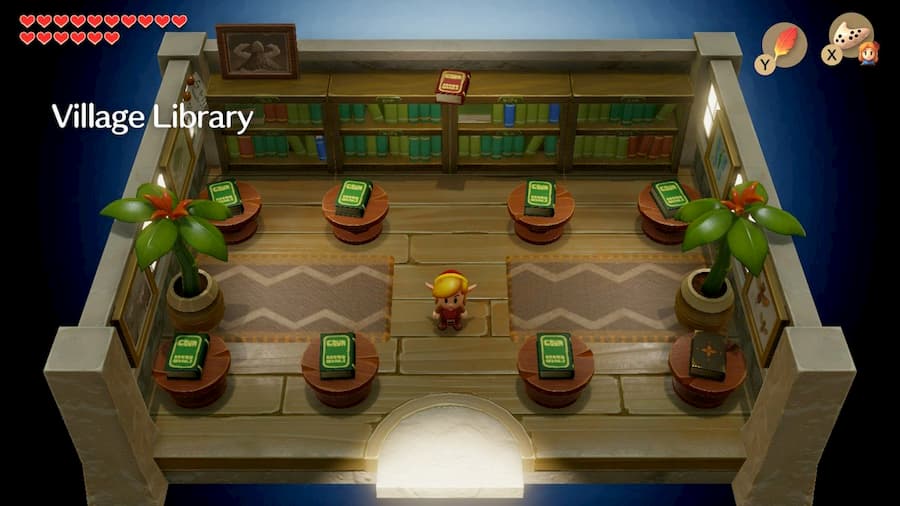 However. The joy of Link’s Awakening comes at a price – literally. It’s a full price game; £50/$60. Perhaps for 10+ hours of enjoyment, that’s fair. But it’s hard to overlook the fact that this is a twenty-six year old game. Even Activision, of all companies, allowed us to play the remastered versions of Spyro and Crash Bandicoot – both containing a trilogy of games – for a cut price. When Link’s Awakening appears on a store shelf at the side of Breath of the Wild, a game in the same series that instead offers over 100 hours of gameplay (and no glaring technical issues…), both for the same price, it’s really hard to make a compelling argument as to why Link’s Awakening is worth that. It simply isn’t.

There’s no denying Link’s Awakening is a very enjoyable adventure, however. It hits you right in the nostalgia spot if you’ve played before, and even if you haven’t it stands up well against more modern titles. After all, games are still continually being made in the vein of classic Zelda adventures. It’s just a shame it’s let down by such troublesome graphical and performance issues. With an optimisation patch and a price cut, The Legend of Zelda: Link’s Awakening would be a must-buy. Until then, it isn’t.

The Legend of Zelda: Link’s Awakening is available on Nintendo Switch.

Want to support GameSpew? Buy The Legend of Zelda: Link’s Awakening using our Amazon affiliate link. It won’t cost you anything extra, but we’ll get a small slice of the purchase. 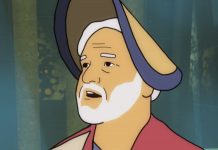 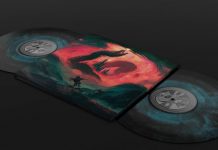