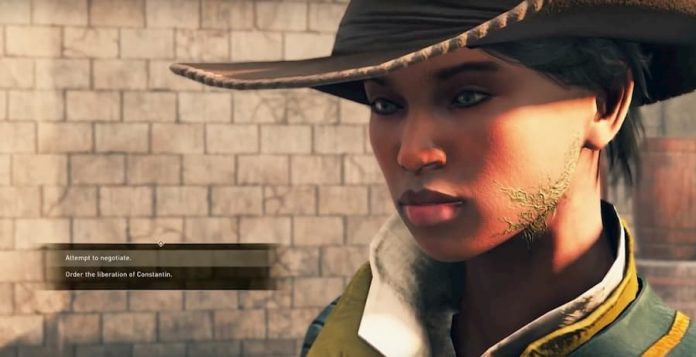 Wondering which characters you can bo… er, romance in GreedFall? Here’s what you need to know.

There are five companion characters in the game, four of whom can be romanced. None are exclusively gay or lesbian but two are bisexual. You can romance three characters per gender.

To romance a character you’ll need to talk to them (without crushing their spirit) and complete their personal side-quests, which will involve shorter quests. Keep talking to them regularly and you’ll be presented with heart dialogue options which, if followed, ultimately lead to romance.

However, it is possible to torpedo your chances of romance if you act in a way that they heavily disapprove of. For example, Siora will disapprove of you killing natives rather than negotiating with them.

If you’re playing a male character you can romance:

If you’re playing a female character you can romance:

We recommend that you save your game often; that way, if you make a decision that leaves a companion cold, you can roll it back. We also ran into a bug that meant we were stuck with one looping dialogue option so were unable to romance a particular character.