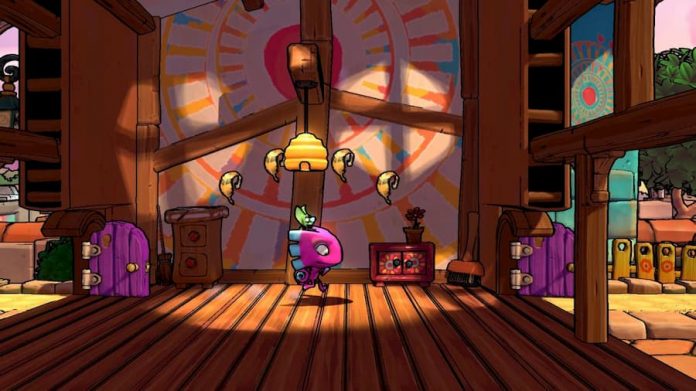 Get ready for another adventure with everybody’s favourite chameleon-bat duo in Yooka-Laylee and the Impossible Lair, coming to PC and consoles on October 8th.

Preorders are now open for the sequel to Playtonic Games’ 2017 retro platformer Yooka-Laylee, and it looks like game modifying ‘Tonics’ are returning in a big way.

More than 60 tonics can be collected in Yooka-Laylee and the Impossible Lair, each changing up the visual style, the gameplay or the environments. For example, some tonics might grant you infinite rolling, or harder enemies – while some will give Yooka an enlarged head or turn every level into a disco party!

The team behind Yooka-Laylee was comprised of ex-employees of Rare who worked on games such as Banjo-Kazooie, and was designed as a spiritual successor to those retro platformers. Fans who feel nostalgia for that era of gaming will be happy to hear of the new sequel.

Yooka-Laylee and the Impossible Lair will be coming to PlayStation 4, Xbox One, Nintendo Switch and PC on October 8th – and can be preordered now to get a bonus ‘Trowzer’s Top Tonic Pack’, containing four exclusive cosmetic tonics. You can find more details on the Team17 website, and check out the new release date trailer below.

Want to support GameSpew? Pre-order Yooka-Laylee and the Impossible Lair using our Amazon affiliate link. It won’t cost you anything extra, but we’ll get a small slice of the purchase.