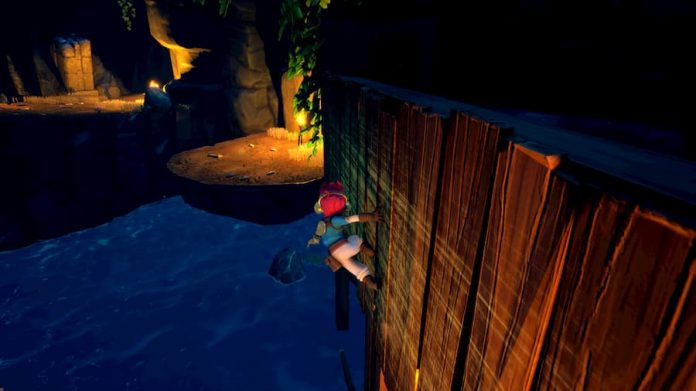 If, like me, you were a child growing up in the early 2000s, 3D action-adventures were basically all you had.

For better or worse, the late 90s tossed 2D graphics in the bin and replaced them with low-poly 3D monstrosities. Obviously it’s a good thing that video games pushed forward into the third dimension, but those were some tough early years weren’t they? With Goldeneye’s grotesque papier-mâché models gracing our screens in the same year as stylish 2D masterpiece Castlevania: Symphony of the Night, it’s a wonder they didn’t just pack it all in and agree that staying on a single plane was a better idea for everyone.

A Knight’s Quest is a retro 3D action-adventure game developed by Sky9 Games and published by Curve Digital. In the tradition of classic action-adventures, the gameplay comprises a mix of platforming, combat, puzzles, exploration, RPG elements and anything else they think they can get away with jamming in to make it sound more impressive. You play as Rusty, a clumsy adventurer with a metal arm and the exact same hairstyle as Philip J. Fry, who unwittingly unleashes a destructive magical force upon the world while hunting for treasure. In order to fix his mistake, Rusty must travel across the kingdom of Regalia, collecting elemental weapons and magic powers from the three Spirit Knights who once defended the land.

Everyone seems to be jumping straight to the Zelda comparison with this one, because the influence is obvious even to someone like me who didn’t grow up in a Nintendo household. The vaguely fantasy-style setting, the young hero seeking magical artifacts, the action-adventure gameplay, even the “z-targeting” fighting style (or as I like to call it: “Baby’s first soulsborne combat”). It also goes for a cartoony art style somewhat reminiscent of The Legend of Zelda: The Wind Waker, which is a bold move because the art direction of that game was famously divisive. Or rather, it would have been a bold move had the argument not been settled by the fact that Wind Waker still looks pretty good to this day, while every game that did “realistic” graphics from that era has characters that look like half-chewed action figures. 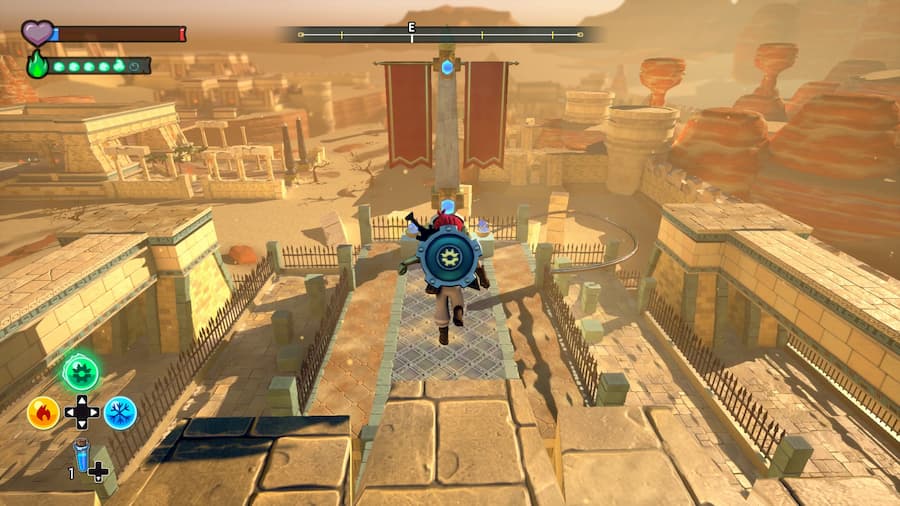 Reflective of the cartoony art style, the writing is all very light and comedic, in a way that only occasionally bordered on annoying. While most games attempting comedy make me want to cringe so hard that all the fluid escapes my body like a squeezed lemon, A Knight’s Quest actually remained quite charming and funny throughout. Each background character has a distinct personality and their own unique quirks; like the Mayor who takes the first possible opportunity to build a giant laser cannon, or the artist who insists he gets you in the perfect light for his painting before handing you a crude childish drawing. In fact, considering the game’s problems, the charm of the writing might have been the main thing that made me want to keep playing.

When A Knight’s Quest was first announced it was boasting over 30 hours of play time, which I don’t doubt for a second because I’ve put in about 15 hours myself and there’s still no end in sight. You probably think this sounds like a positive thing, like Sky9 has delivered a truly epic quest to embark upon. However, the truth of the matter is they’ve just padded the game out with more padding than Paddy Paddington eating Pad Thai on a lily pad.

It feels like every single element in A Knights Quest was specifically designed to waste my time. Environments are comprised of huge stretches of empty space, which the game makes you run back and forth through countless times, while teasing you with “warp crystals” that you’re apparently not allowed to use until you’ve proven your time is worth the developer’s respect. From the very beginning, standard enemies can take up to twenty hits before they have the good grace to die; which doesn’t make it particularly challenging, just time-consuming and boring as hell. Spamming the dodge button is also slightly faster than running, so a lot of my playtime was spent rolling across the landscape, ignoring every enemy and hearing the same three exertion noises over and over again, making it sound like Rusty was retching from dizziness. 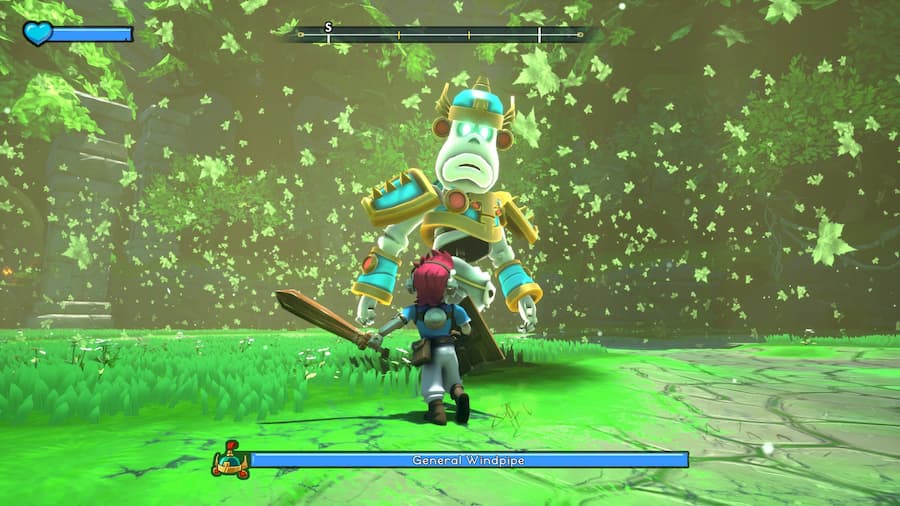 One particular sequence almost made me quit and give up on the game for good. Some enemies have magic barriers, which protect them from any damage until you hit them with an elemental attack that corresponds to its colour. One arena forced me to face three of these enemies, who would always cluster together and constantly spam the bullshit spin attack that restores their shield, so whenever I hit them with a fireball they instantly got it back. Even if I did make one of them vulnerable for a few moments, the three enemies were clustered so tightly that there was always at least one spinning indestructible skeleton preventing me from taking a swing.

It was only through the power of true saintlike patience that I was able to get past this sequence, but my attitude towards the game had been permanently soured. I used to think that the simple jumpy-hitty combat of action-adventure games was their weakest aspect, but after playing with this more complex system I’m wondering if the dumbed-down button mashing is actually a better fit for the genre. I don’t need this kind of fighting in an action-adventure game; having to worry about locking on, blocking, dodging, parrying, coloured shields, charged hits and magical spirit forms makes the flavour of the combat too overpowering in the bubbling stew that is the genre. Just keep it simple, give me a light attack and a heavy attack and the whole thing feels more balanced.

Again, it’s more or less the very definition of “action-adventure” for the gameplay to be broad and unfocused, but that doesn’t have to be a huge drawback; because this makes it a good framework for imaginative plot and world building. True, titles like Ocarina of Time were the trailblazers, but the games that really stand out in my childhood memories are the ones that used creative storytelling to elevate the genre beyond its roots.

Watch the video version of this review below:

Psychonauts had you explore levels constructed from the subconscious minds of asylum inmates, in order to stop a maniacal dentist from stealing the brains of all the children at a psychic summer camp. Oddworld: Stranger’s Wrath put you in the role of a poncho-wearing bounty hunter who captures outlaws by shooting live spiders at them, so he can save up for an operation to remove his own legs. Returning to the generic fantasy setting with the standard hero’s quest plot just feels so uninspired by comparison. Being nostalgic for a certain era of games is all well and good, but at least try to build upon and elevate the style, or we may as well have made no progress at all in the last two decades.

If I had to suggest just a few things to improve this game, they would be to shrink everything down so the fun bits are packed together more tightly, let us use the warp crystals from the start and make standard enemies die in three hits. There’s a great game hidden somewhere here, but it’s stretched so thin I have to squint hard to see it. A Knight’s Quest is the video game equivalent of diluting the last dregs of ketchup so it lasts longer. Maybe it’s just me, but I’d rather have a small amount of tasty sauce than drench my entire plate in red water.

A Knight’s Quest is available on PS4, Xbox One, Switch and PC. We reviewed the Xbox One version.