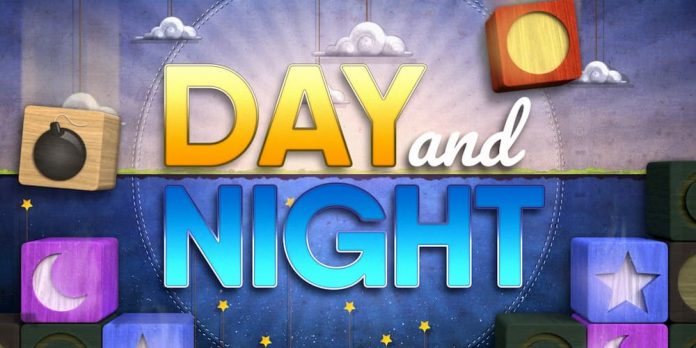 Although initially disappointed by the lack of Kid Cudi’s club banger despite sharing a name, I couldn’t help but fall in love Ridiculous Games’ Switch-exclusive block-matching puzzler.

Day and Night gives a unique twist on the falling block puzzle. Like most, the idea is to group together matching tiles in order to clear them from your screen. Tiles fall in groups of four, and they’re themed around a time of day, or season.

The catch is, not every falling block matches with the current time of day. When a night block – marked with a star or crescent moon – falls during the day, you’re unable to match or clear those blocks until time changes.

Designed to be played competitively, it gives Day and Night a frantic edge over similar games. Your screen fills up much quicker when you’ve got lots of blocks you can’t currently do anything with. And if you want to be in with a chance of winning, you still need to consider the blocks that aren’t in play: if you’ve been clever and grouped them together, you’ll be in for a nice combo once the time of day does finally switch over.

Throw in some action blocks, like bombs that blow up whatever blocks they land on, or ice that freezes a solid line of your screen, making you unable to play past that point for a short while, and Day and Night becomes a high-stakes game of strategy. If you want to outwit your opponent, you need to stay calm and carefully consider the placement of each block. Should your screen fill up above the top line, it’s an instant loss. 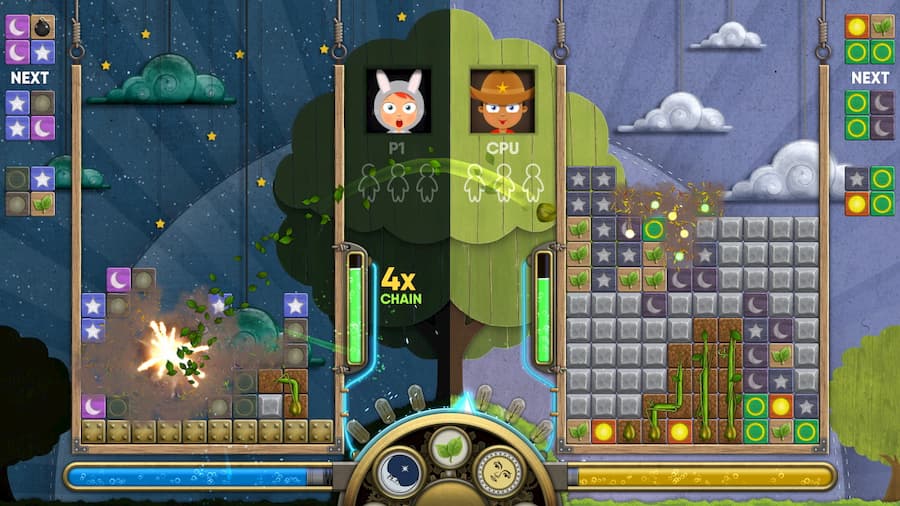 Like any competitive falling block puzzle, outwitting your opponent generally means chaining combos together, which sends blocks and negative effects flying over onto their side of the screen. In a game where you can only ever play with a selection of the tiles that are falling though, it’s easier said than done. But that’s what keeps you on your toes.

Day and Night packs in several game modes, giving you plenty of options on how you’d like to play. There’s a single-player story mode, that plays out over six ‘acts’. Each act packs in several games, each with their own rules and challenges. There’s also single-player ‘dares’ and a survival mode. The dares present weird and wonderful challenges, like winning a match at super-speed, or playing with inverted controls. Survival mode tasks you with surviving as long as possible, taking you through each of the four seasons. If you don’t want to face off against a CPU opponent, it’s the best way to enjoy the game. 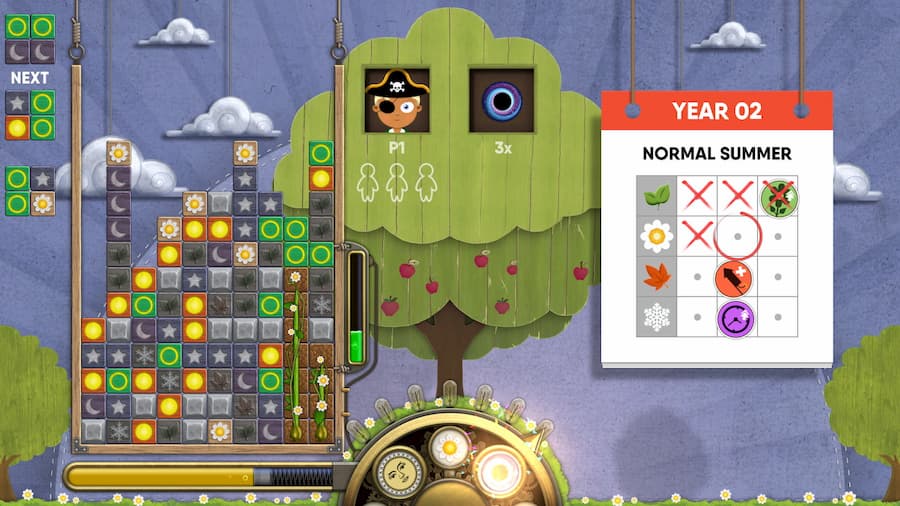 Of course, as in any competitive game of this type, the real draw is perhaps its two-player versus mode. Any competition is better if you’ve got a real opponent by your side to challenge again. The trouble is, it’s only available in local, split-screen play; there’s no online option. And since the rules of Day and Night are a little difficult to get to grips with at first, you’ll probably have to get any friends to sit through the game’s tutorial mode before you play if you want them to provide a worthy challenge.

Perhaps the most charming thing about Day and Night is its presentation. Bright and colourful and brought to life with adorable characters (that can be adorned with collectible hats), it’s set up like a stage play. The backgrounds, which tell you if it’s day or night are designed to look like sewn-together stage props, and are an absolute joy to look at. If you’re playing through the single-player story mode, each set of levels is prefaced by an adorable (if somewhat pointless) little story, giving some detail as to why you are facing off against your CPU rival. Accompanied by some uptempo classical music, it all comes together to make a delightful package.

For £16.79/$19.99, Day and Night is an absolute steal. It’s at its best if you have a like-minded friend to play it with, but even playing against the CPU or battling through the single-player survival mode offers enough value for money. It’s a clever twist on a tried-and-tested formula, with a presentation that’s hard not to fall in love with. Its rules can be a little hard to get your head around, but once you’ve mastered it, Day and Night is hard to put down.

Day and Night is available on Nintendo Switch. 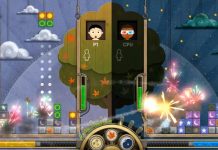