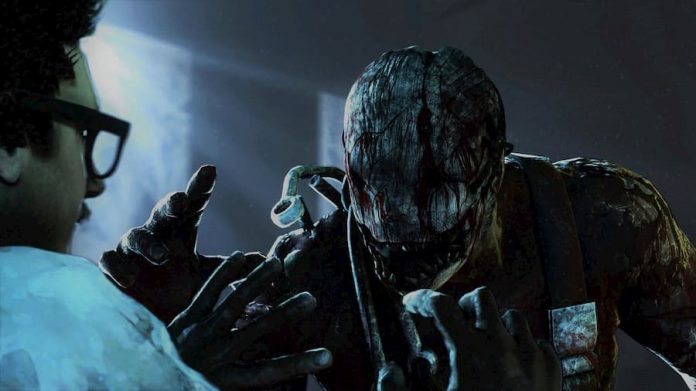 Dead by Daylight on Nintendo Switch is killing me – and not in a good way.

I don’t know how many hours I’ve played of Dead by Daylight. It’s certainly an unhealthy amount, I can tell you that much. I first jumped into the game back in November 2018. It’d been free on PlayStation Plus a while before so naturally I added it to my library, but it sat there gathering digital dust as I didn’t have anyone to play with.

Once I did find people to play with, it didn’t take long for me to get hooked; especially since the game is regularly adding content. Playing a game that included the likes of Micheal Myers, Leatherface and Freddy Kruger seemed like a no-brainer and Dead By Daylight continues to be something that I play on a regular basis. Three, four, five times a week in the evenings.

This is why, when I heard that the game would be coming to Nintendo Switch, I was over the moon. The idea that I would be able to play this game that I’ve invested so much of my time in on a console where I could play while travelling, or while in bed with the covers over my head, was a dream. Plus there’s the fact that I’d be starting over at the lowest level possible and could kick the loser butts of all those who have never played the game before. Is that cruel? Perhaps. Did I still enjoy doing it? Heck yes. 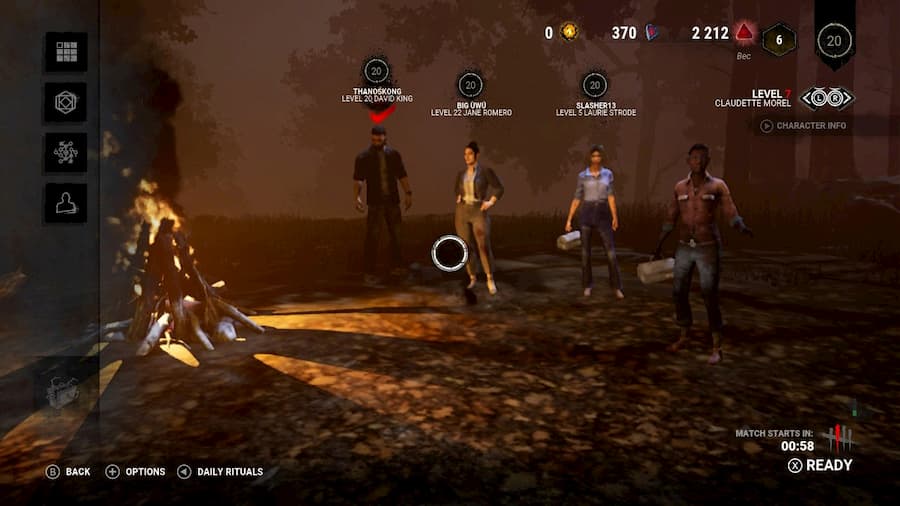 For the uninitiated, Dead by Daylight is an asymmetrical multiplayer horror game where you can either play as a survivor, trying to escape while a horrifying killer is coming after you, or you can play as the killer whose goal it is to kill the four survivors at all costs in order to sacrifice them to your god, The Entity. Both survivors and killers have their own unique abilities and as you play, you’ll unlock upgrades to better prepare your characters for the trials ahead

Unfortunately, upon loading up my old friend Dead by Daylight on Nintendo Switch, I found it looked a little… different. If you’ve ever woken up out of deep sleep and had to rub away the fog that comes over your eyes in order to fully wake yourself up, that’s what it looks like. Dead By Daylight‘s visuals are bad on Switch, both docked and undocked. You can barely see the characters’ faces, and textures in the environments aren’t much better. Dead by Daylight has never been the most beautiful game in the world but the Switch version is much more of a downgrade than I was expecting – especially considering how much developer Behaviour Interactive has been amping up the Switch release.

In handheld mode, Dead by Daylight on Switch manages to maintain a steady framerate, running at about 30 frames per second. Unfortunately, that’s not the case when playing docked. As much as I’d like to be able to switch between handheld and the big screen whenever my heart desires, I’ve stuck to playing in handheld mode due to the aggravating choppiness of playing it docked. For a game that relies heavily on players’ reaction time, one lag spike can mean the difference between life or death. Playing as a survivor, I’d regularly fail skill checks left and right, and be shamed by my fellow survivors in the process – only to watch them fall victim to the same issue moments later. 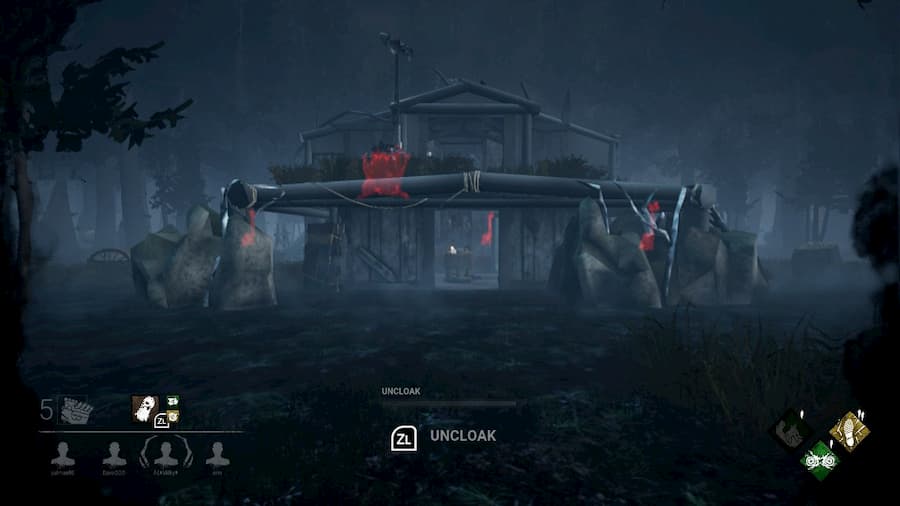 Not only is Dead By Daylight laggy beyond belief while it’s docked, but the main menu itself is a cumbersome battle whether you’re playing handheld or not. Moving your cursor over anything causes the game to twitch back and forth, vibrating like a bike on brick pavement. Tasks as straightforward as adding points to your bloodweb, equipping abilities or switching between characters is a chore. I’d hope it’s something that’s fixed in the future with a patch, but if you’re planning to pick the game up while it’s still new, be warned.

While the textures in the environment are much poorer compared to other versions of the game, Dead By Daylight‘s lighting and shadows still manage to impress me on Switch. It’s an important aspect of any horror game, and here they’re employed very well in order to create excellent atmosphere. For the most part, Behaviour has done a good job in keeping the maps looking good, but of course the lower-resolution textures are more noticable when playing docked. The game’s newest map included with the Stranger Things DLC has particularly impressed me; there are so many twists and turns, making it hard to tell where a killer is coming from – though it can work in your favour as a survivor by spinning killers around in circles. 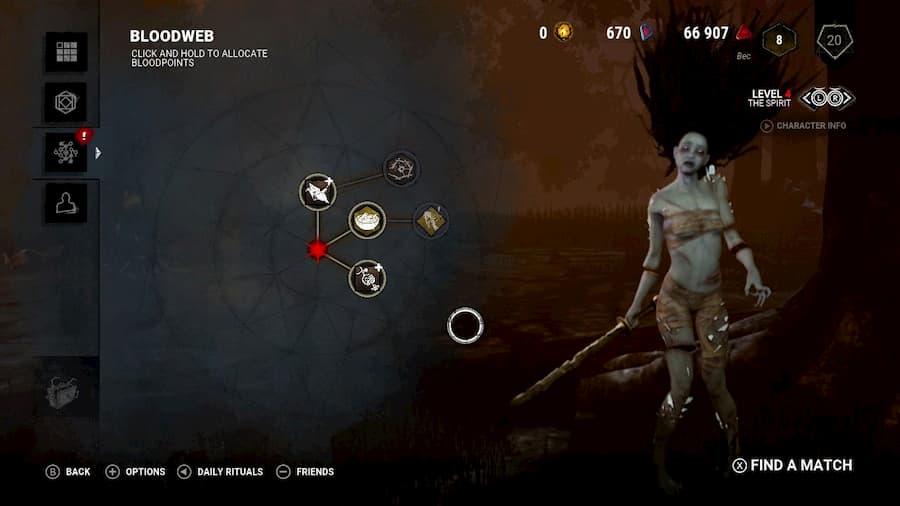 One huge issue that Dead by Daylight has had in the past is load times and matchmaking issues. During the prime of my Dead by Daylight career, my friends are I could wait up to 30 minutes to get into one game. Thankfully, with the introduction of dedicated servers, we now rarely wait longer then ten minutes. And, as of right now anyway, the same can be said for the Switch version. On the first few days after the game’s launch I waited no longer than five minutes to get into games as both killer and survivor. But, just like with any game, as the hype dies down those load times may get longer. Especially for killers trying to get into matches with four other people.

Dead by Daylight on Switch has a few bonuses over the base game on other formats. On Switch, it includes every killer and survivor up to the “Shattered Bloodline” DLC. So players will start with 9 killers and 10 survivors. Two killers and one survivor are missing from the lineup: Freddy Kruger, his survivor Quentin and killer Leatherface are not included, and are not currently available for purchase. All other add-ons are available for purchase on the Nintendo eShop.

I’m sad to admit it, but Dead by Daylight on Nintendo Switch is a huge let-down. I love the game, and while I was excited to get to play it on a handheld format, its lagginess, framerate issues and massive graphical downgrade mean that I just can’t recommend it on Switch. If you’re still tempted to give it a try, perhaps wait a month or two and see if any patches come out to fix some of the current painful and glaring issues. Until then, the price simply isn’t worth what you get. Stick to playing it on another format; trust me, you’ll have a much better experience.

Dead By Daylight is available on PC, PS4, Xbox One and Nintendo Switch. This review is of the Switch version.