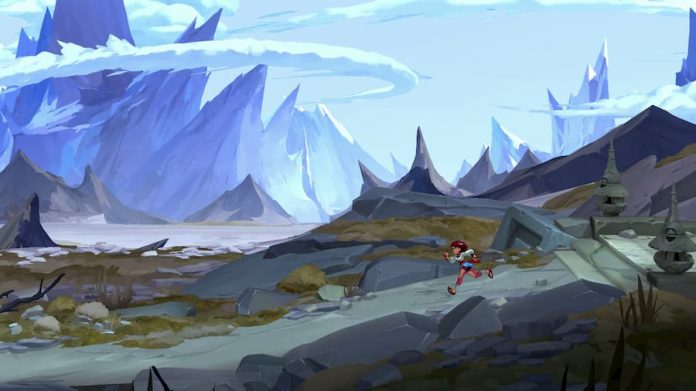 By all intents and purposes, Indivisible should have been an exceptional video game.

Indeed, it has some elements of real greatness. Its hand-drawn art style, for example, is sublime, and its Asian-inspired soundtrack is simply a delight to listen to. Its unique ideas about gameplay stand out as being truly interesting – but sadly many of them have been poorly implemented. Indivisible is a game that could have been truly special. Instead, it’s an uphill battle that’s made doubly frustrating because it’s easy to see just how good it could have been with a bit more fine-tuning.

But let’s start with the good.

In Indivisible, you play as Ajna, a young woman who’s just discovering she’s not quite like everyone else. After tragedy strikes her village, she’s left no choice but to avenge the deaths of those she cares about by hunting down the evil Ravannavar. Along the way she’ll meet a cast of colourful characters who’ll help her on her journey by joining her in battle.

Every character has their own quirks and skills, and they’re brought to life with humorous dialogue. They’re all well-acted, but even the conversations that aren’t voiced are a delight to behold thanks to how well-written the dialogue is. Razmi, a character who wears a dead tiger draped across her shoulders, has to be my favourite thanks to her strange obsession with death and monsters. 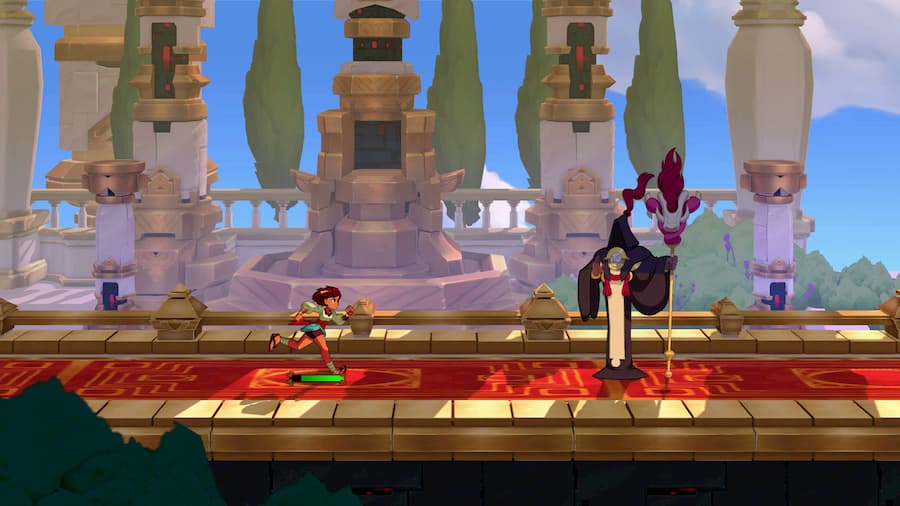 As I’ve already touched upon, Indivisible is a beautiful-looking game. It boasts a hand-drawn anime style, and even single scene is a delight to look at. Environments are varied and interesting; from bustling towns to the depths of a forest and the stark emptiness of a desert, every one of Indivisible‘s locations has been lovingly crafted. The characters are brilliantly designed, too; even non-playable townsfolk are well-detailed and full of personality. It creates a world that simply begs you get lost in it.

But try as you might to get lost in that world, Indivsible‘s multitude of frustrating gameplay issues will wrestle you every step of the way.

A mixture of platforming and RPG-style combat, developer Lab Zero Games has had some truly unique ideas for Indivisible. Rather than being straight-up turn-based combat, fight sequences in Indivisible rely on waiting for each character’s attacks to charge, utilising a series of moves, and dodging incoming attacks while you’re waiting. It makes for – on paper at least – fluid and fast-paced combat, where you always need to be alert and paying attention to the action on screen. 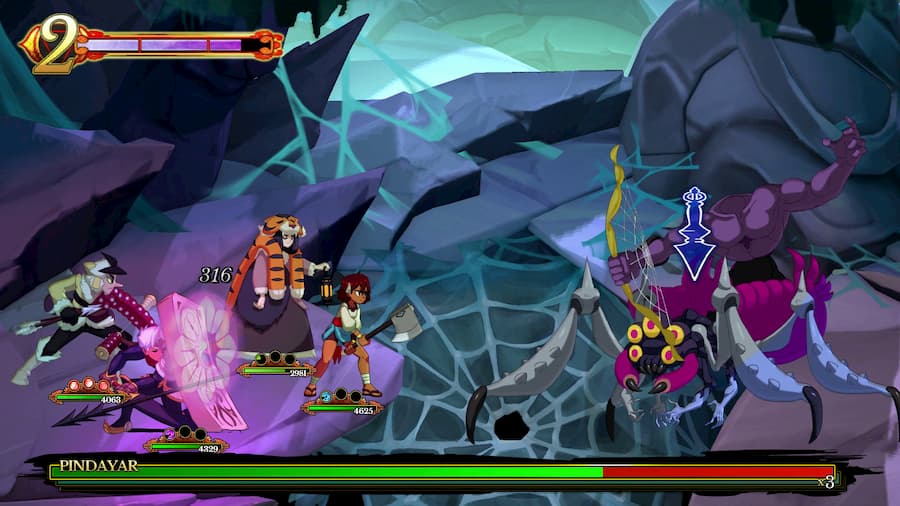 That speed and fluidity is let down by the fact that most enemies have a ridiculous amount of HP. Even the most casual of combat encounters can last several minutes as you batter through health bars that go well into the tens of thousands. Combat encounters are also plentiful, with some areas having you encounter enemies every few seconds. Unless you can manage to evade an enemy out in the world, there’s no way to escape a fight, either. Sure, it’s great if you care about building up your experience, but when each fight lasts as long as it does, it becomes a tiresome slog pretty quickly.

The length of fights, though, isn’t as aggravating as the fact that perfectly blocking many enemy’s attacks feels downright impossible. While you can press and hold the block button early to reduce incoming damage a little, you need to carefully time the press to successfully minimise the damage received; a fraction of a second too late and you’ll receive the full brunt of the hit, or hits. However, exactly when you need to press the button to dodge the attack varies depending on the enemy type and the attack. It’s not always clear what type of attack is coming your way, so your success rate of perfectly blocking more often than not feels like a lottery. 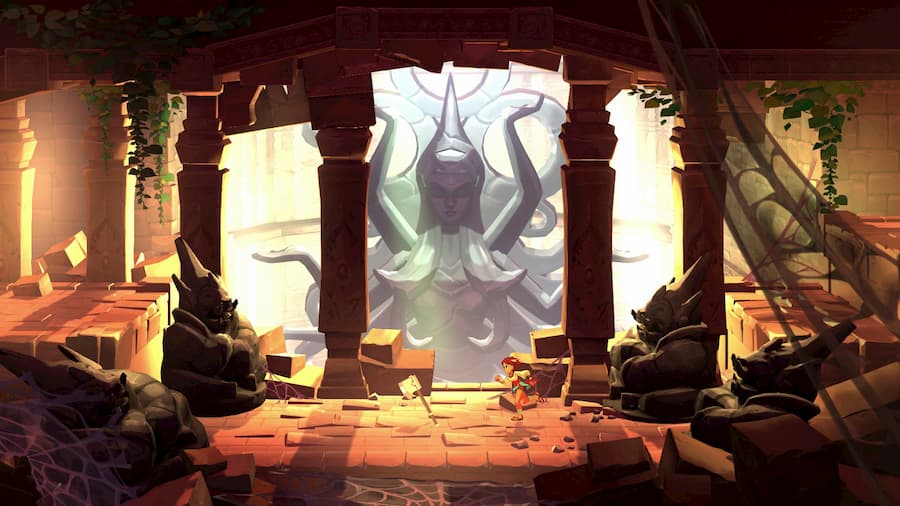 Worse still are my encounters with a couple of enemy types who can deal devastating amounts of damage with one hit. These seemed even harder than most enemy types to successfully block, and so my characters would frequently die after one seemingly innocuous attack. I’m not sure if their ridiculously high damage numbers are a bug or a feature, but either way encounters with them are needlessly frustrating.

Sadly, these grievances with Indivisible‘s combat aren’t countered by its platforming sections – these too have their own issues. It’s clear that Lab Zero Games has tried to make Indivisible play differently to other platform games. You can’t simply double-jump with the touch of a button, or automatically grab onto high ledges, for instance. Ajna has a range of skills that you’ll unlock as you play, which are all used in traversing the environment. Rather than double-jumping, she can throw her axe into a wall, allowing her to vault up slightly higher. She’ll also unlock skills such as a super-fast run that can break through certain walls, a jumping slide to get through tight gaps, and a spear that can be thrown to keep enemies at bay. 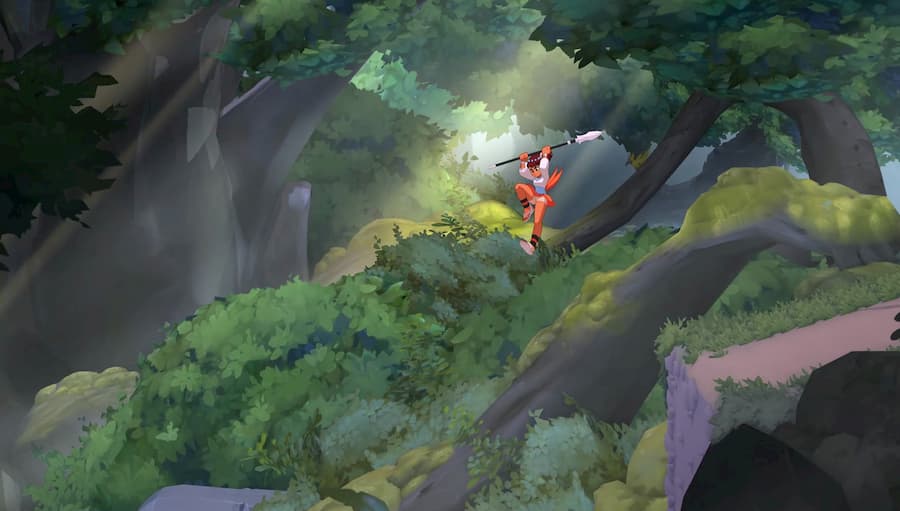 The wealth of skills at Ajna’s disposal, and the drip-feed of them as you progress through the game, is notable. It does make Indivisible‘s gameplay stand out from your typical platforming game, but not necessarily for the right reasons. Much like combat, traversal often requires pixel-perfect timing, pressing a button just at the right time. To reach a higher ledge for instance, Ajna needs to jump then throw her axe into the wall – but press this a split-second too late, and she’ll be too low down on the wall to clear the rest of the distance. The game also does a poor job of explaining how to use Ajna’s skills in some instances. They often need to be combined to reach certain areas – i.e. a slide followed instantly by an axe throw – and it’s only by trial and error (or staring blankly at the screen for ten minutes) that you’ll figure it out.

To say Indivisible is a bit of a disappointment is an understatement. It’s not a bad game by any means, but it could have – and should have – given us a much more enjoyable journey than what we’ve ended up with. A bit more time fine-tuning combat and traversal would have gone a hell of a long way in making Indivisible worthwhile. As it is, its sumptuous graphics and excellent writing are let down by maddening gameplay elements – and that’s the most disappointing thing of all.

Indivisible is available on PC, PS4, Xbox One and Switch. We reviewed the Xbox One version.

Want to support GameSpew? Buy Indivisible using our Amazon affiliate link. It won’t cost you anything extra, but we’ll get a small slice of the purchase.