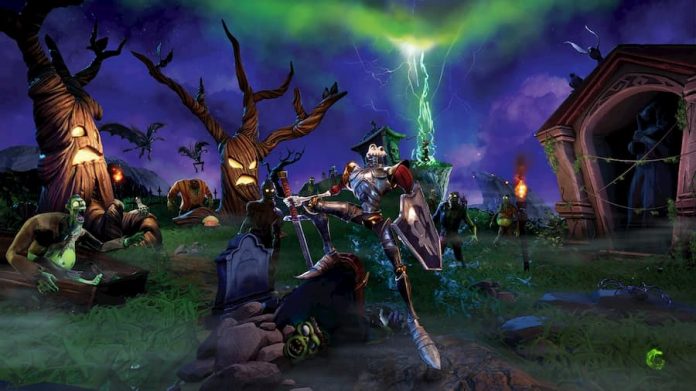 It isn’t that hard to just lend a guy a hand.

A few days ago, I considered myself a huge MediEvil fan. I remember playing it on the original PlayStation back when I was a kid. I loved Sir Daniel Fortesque and his detachable hand. I was absolutely terrified of the scary zombies and living jack-o-lanterns he was forced to face on his adventure.

Only upon loading up the new MediEvil remake did I realise that while I’m still a fan, I played much less of the original than I’d thought. The first thirty or so minutes are fresh in my memory – but everything after that was basically brand new. I absolutely couldn’t wait to completely re-experience a game I had such fond memories of, if only slightly misremembered, in a shiny new form.

MediEvil is a hack-and-slash adventure game originally released in 1998 by SCE Cambridge Studio. This new, completely revamped MediEvil is developed  by Other Ocean. Players step into the bones of Sir Daniel Fortesque, brave hero of the quaint town of Gallowmere – but not really. In the year 1286, Gallowmere was almost taken over by an evil sorcerer named Zarok. The King of Gallowmere sent his greatest champion (that’s Sir Dan) to take out Zarok. Dan charged into battle, but was felled by the first arrow released on the enemy’s side. The King, wanting to cover up the embarrassment, claimed that Dan killed Zarok despite the sorcerer simply going into hiding. 100 years later, Zarok has returned to take Gallowmere once and for all, raising a powerful army of undead monsters. Fortunately for Gallowmere, Dan gets raised from the dead too; he’s determined to do it right the second time around and earn his rightful place in the “Hall of Heroes.” 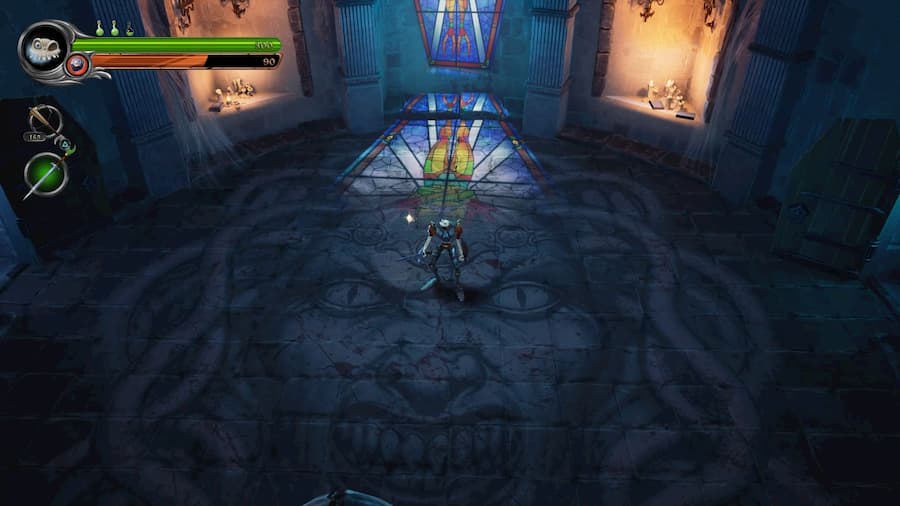 When comparing the original graphics of MediEvil with the current version, the improvements are truly breathtaking. Sir Dan shines against the colourful backdrops, dynamic characters and truly horrific creatures. Just like Zarok himself, it’s as though MediEvil has jumped 100 years into the future. The game’s voice acting was pretty great back in 1998, but even that has been vastly improved, with well-written dialogue bringing these silly characters to life with gusto. The characters are genuinely funny, too; from the tongue-in-cheek heroes in the Hall of Heroes to the wall gargoyles that give you advice, MediEvil is brimming with humour that will genuinely make you chuckle.

Starting out with just a sword and a set of throwing knives, Sir Dan’s loadout of weapons becomes truly impressive as you progress through MediEvil; by the end of the game you’ll be practically unstoppable. Each level contains a “chalice” that, providing you defeat enough enemies on the level, you can collect and bring to the Hall of Heroes. Your fellow heroes, most of which don’t seem to like you because of your misplaced hero status, will lend you their weapons and other things to help you on your journey to save Gallowmere. It’s good encouragement to always try and kill as many enemies in a level as possible – but to be honest, the enemies are so annoying, and never really leave you be, so you’ll likely be forced to kill them all, anyway. 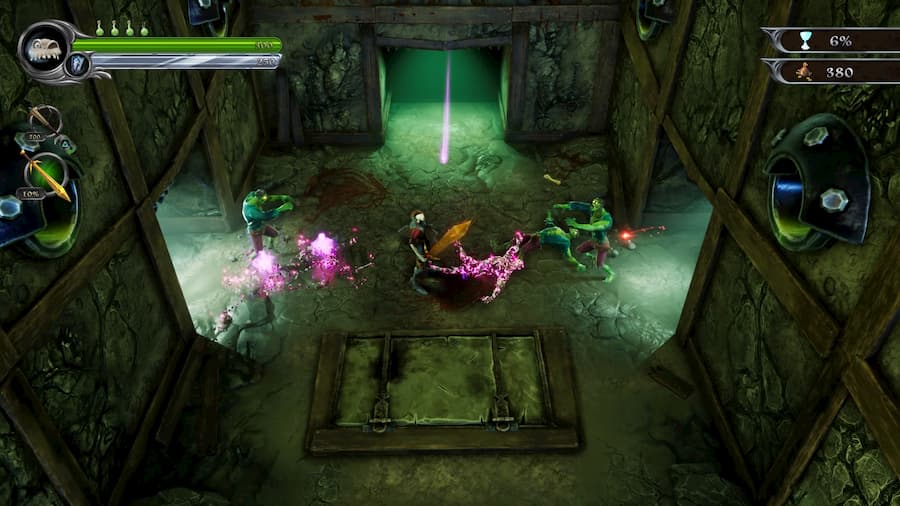 Like most things though, MediEvil isn’t perfect; the remake isn’t free of problems, including some that were present in the original version. Most aggravating is the game’s collision issues. Sir Dan seems to have a huge problem with getting caught on parts of the surrounding environment, even sometimes getting stuck on seemingly invisible objects. It’s pretty detrimental for a game where you’re constantly being berated by enemies and need to be fast of your toe-bones.

There’s also a huge issue with landing on things properly; also very frustrating in a game so heavily focused on platforming. It’s most inconvenient when you’ve timed a jump perfectly, only for Dan to take one step too many. It’s a shame that the controls aren’t a bit tighter in this regard; when one wrong jump can send Dan back into the grave, or at least take away one of his health vials, it’s a huge deal.

It should be said that MediEvil isn’t a walk in the park. With no option to change the difficulty, if you get stuck, you’ll continue to be stuck until you’ve gritted your teeth and practiced enough. There’s also the fact that some enemies hit as hard as a 10-tonne truck speeding at you at 90 miles an hour – and if you die (which you will, my friend, you will), you’ll go all the way back to the beginning of the level. That’s right: Medievil has no autosave and no checkpoints. It’s just like how it was in the 90s – hard and unforgivable. Now if that’s not hardcore I don’t know what is. 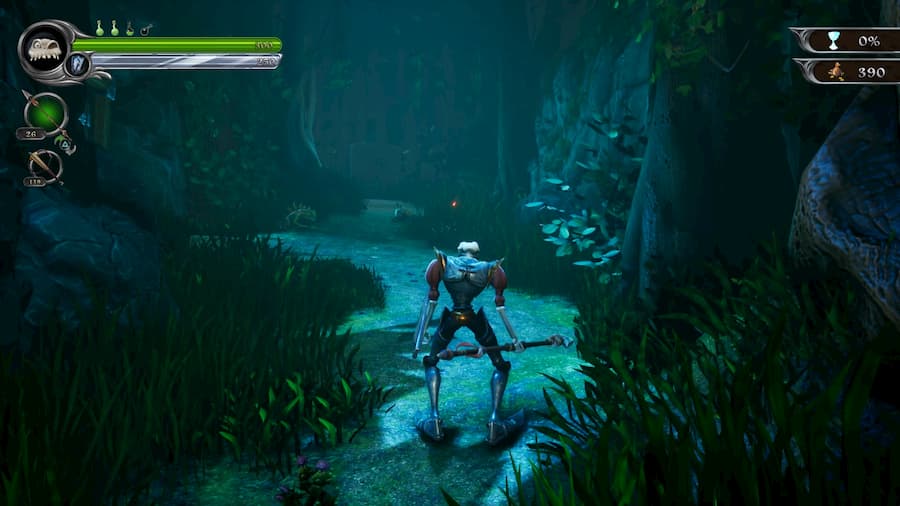 Now, while I often find overly difficult games to be a drag, I also hate when games hold my hand too much. While MediEvil poses a real challenge, it’s never insurmountable. In fact, the more you play of MediEvil‘s levels, the faster you’ll get at beating them. Playing through a level for the first time might take you 45 minutes, but once you’ve solved the puzzles and found all of the secrets, it will take you no time at all to do it all over again. So yes, MediEvil can feel particularly unforgiving when it sends you back to the very beginning of a level, but that’s also a great way to encourage you to do a bit more exploring if you decide to revisit the level later looking for tasty secrets.

The MediEvil remake is a faithful recreation of the 1998 classic. Although my childhood memories failed me in recalling exactly what it was like to play back in the day, playing the remake still brought with it swathes of warm, fuzzy nostalgia. 2019’s MediEvil has done nothing but improve upon the original in every conceivable way, and if you can look past its faults, it’s a wonderful adventure whether you’re familiar with the original or not. Sir Daniel Fortesque looks great after so many years; for players looking forward to jumping back into those bones, they surely won’t be disappointed.

MediEvil is available on PS4.

Want to support GameSpew? Buy MediEvil using our Amazon affiliate link. It won’t cost you anything extra, but we’ll get a small slice of the purchase.

The Best Gifts to Buy a PlayStation Gamer