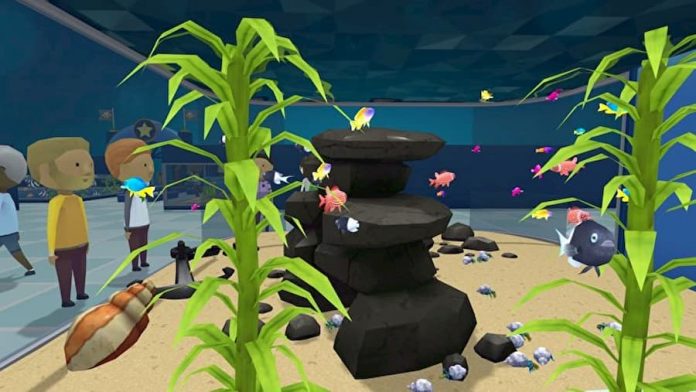 I’ve been to plenty of aquariums in my time, but never have I had to think so intensely about its design.

That’s what you’ll be doing when you load up Megaquarium. Developed by Twice Circled, Megaquarium is a management sim where you’re in charge of a brand new aquarium. You’ll start with just one or two fish tanks and you’ll have to fuss around with heaters and filters as well as purchase your first few fishies. It isn’t long before you’ll be welcoming the public into your tiny, squished, inefficient building. Don’t worry though: it won’t stay that way for long.

If you think that starting your own aquarium must be a bit overwhelming, you’re not wrong – but thankfully, Megaquarium does a fantastic job of introducing you to everything gradually so you learn the proper way to keep everything afloat.

In Campaign Mode, you’ll be given a variety of tutorials to follow that teach you how to build tanks, hire workers, open your doors to patrons and more. Playing on Nintendo Switch, I did find myself squinting at the small lettering for the tutorials while playing in handheld mode. I decided to play on my television while I was still learning the ropes, but once you get used to the controls, playing in handheld mode was fine when you don’t need to rely on tooltips. 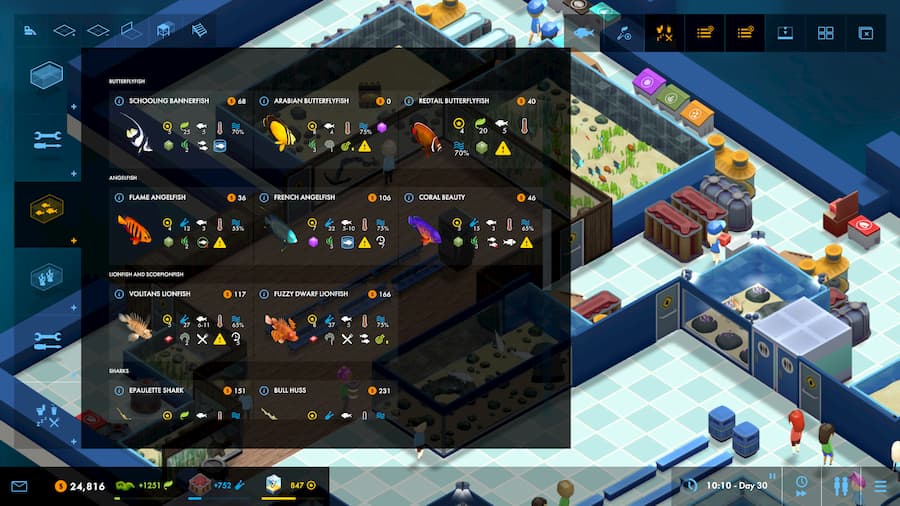 There’s a lot more to Megaquarium then just building your awesome aquarium, though. You’ll be performing research to help discover more species, too. The more ecology points you earn, the more species you can add to your exhibits. You earn these points by bringing in guests to enjoy the exhibits you currently have. You’ll also be earning revenue from your patrons to help pay for more tanks, more decorations, keep your employees happy and  keep your aquarium running as efficiently as possible. It can be difficult to figure out how to keep your tanks just-so when you first start; each tank requires heating and filters so you’ll have to strategise where you place things. You’ll probably have to sacrifice the attractiveness of your building at first because there simply won’t be enough room to hide the mechanics from the public.

When it comes to the fish specifics, Megaquarium gets even more complex. You see, each type of fish has needs that are specific to that species. You’ll be tasked with meeting the shoaling requirements for each of your fish to keep them happy and healthy. Some fish need a certain number of their own kind in the tank with them, and others, like the starfish for example, only eat after you’ve fed others in the same tank. Don’t get too discouraged if some of your fish pass away, you won’t be perfect at it at the start, but things will get better. RIP my first few sets of fish.

The uniqueness of the species you unlock is one of the best parts of the game. There’s a lot of different requirements for each fish, so it’s an enjoyable challenge making sure their tanks have what they need. You’ll have to pay attention to plant life, lighting, the size of the tank and more. As you progress through Megaquarium, you’ll also be able to put your equipment (like your filters, heaters, etc.) further away from your tank to make the outside of the aquarium look as attractive as possible. 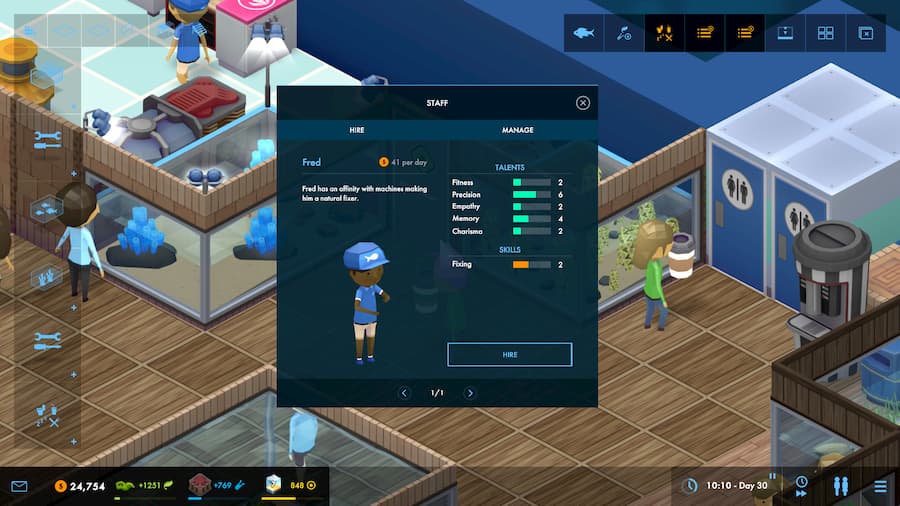 On the technical side of things, some of Megaquarium‘s menus and options are a little confusing; I found myself forgetting how to do things even after playing for more than an hour. Being able to reorganise your fish by category so you can remember which fish have which shoaling requirements would be a big help, and more detailed descriptions of equipment and their purpose would have been appreciated too. Essentially, you do a lot of things because you’re told to, but you aren’t told why. Additionally, it can be a cumbersome affair adding walls and trying to expand your aquarium. You’ll pretty much be on your own when it comes to learning how to properly expand because after the tutorial, there isn’t much in the way of help with this particular aspect.

A few niggles aside, Twice Circled should be very proud of its charming simulation game. Although its graphics are simplistic, the game speaks for itself with its entertaining gameplay. Once you get the hang of all its systems, Megaquarium is a lot of fun. If you enjoy management sims, I guarantee that you’ll lose numerous hours in designing your dream aquarium.

Megaquarium is available on PC, PS4, Xbox One and Switch. We reviewed the Nintendo Switch version. 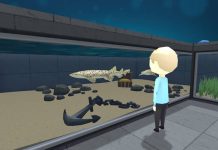 Megaquarium is a Fishy Management Sim