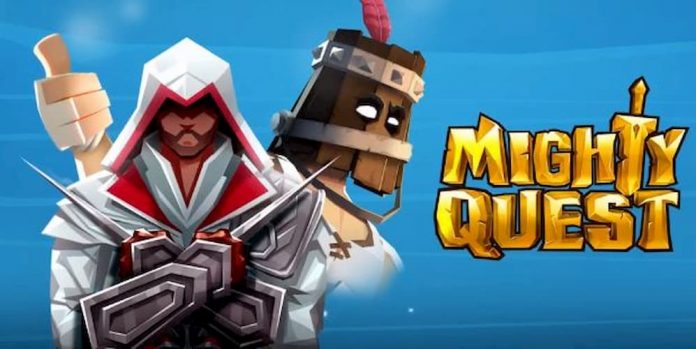 Wondering how to complete the missions in Mighty Quest For Epic Loot’s season two week four? Here’s everything you need to know.

I heard you can obtain a Blessed Gear using Combine? Leonardo would love this!

Head to the forge, and to ‘combine’. In order to combine two items, they need to be the same type of item, at the same level, and at max. If one of the items you’re combining is blessed, you’ll have a higher chance of getting a blessed item as a result. Before you actually combine anything, you can click on the result and see the potential outcomes. Don’t take too many chances as the odds are low, unless your starting items are also blessed!

Copycats must go down. Make sure the LAST thing Stealthy Stan sees is a sharp projectile.

Stealthy Stan is the boss of Act 6, so you’ll find him in Act 6, Level 10. Equip the Cross Strike skill before you start – the skill that gives you two flying blades. Don’t attack Stan with anything else. He’ll die after a couple of hits, and the reward will unlock.

Pacifist Trial: have three Green Cyclops fall WHILE you are stunned yourself. Do it within one run.

You’ll find green cyclops in Act 5, Level 9. Not every attack they do will stun you, but you’ll know a stun attack is coming when a large red circle appears on the ground. Wait until you see this, and then attack using a damage over time skill. For me, using a levelled-up Black Hole worked.

Prove the superiority of men against machines by defeating Shelling Shaun… while you remain untouched.

You’ll find Shelling Shaun on Act 7, Level 5. I’d recommend using a projectile weapon, like a staff, if you have one. Keep your distance be careful where you stand, and you should be able to do this one easily.

Unleash the deadliest Tornado ever and leave behind as many bodies as there are hours on a clock.

You’ll need to equip the Whirlfury skill and kill 24 enemies with it. There’s no specific level to do this on, but you’ll want one with lots of enemies so you can take down as many as you can with one attack. I did it on Act 10, Level 1. Lure as many enemies as you can in one place, then pull them close to you with a Black Hole. Then unleash Whirlfury to take them all down.

Your elemental gear lacks of discretion. Keep a low profile by dropping five neutral gear items. Where could these be hiding?

Most of your gear – weapons and armour – has an element tied to it, but some early-game items are ‘neutral’. All of the levels in act one contain neutral items. Auto-win any of these levels a few times, and you’ll see that neutral items, with a grey icon, are dropping. You’ll need five altogether to unlock the challenge.

One of your “churches” is corrupted to the point it now looks venomous. This calls for a HARD and purifying raid.

To complete this mission, you need to complete Act 4, Level 4 on hard difficulty. If you’ve already completed the level before, an auto-win is enough to unlock the reward. (Thanks to Monteiro, Tapio and Brian for your tips!)