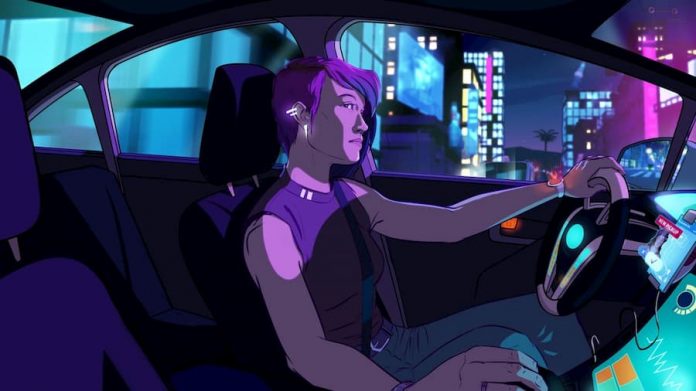 Do you ever feel like you’re the last flesh and blood human on the planet?

That’s something that you’ll likely find yourself asking when you play developer Chance Agency’s Neo Cab. Neo Cab is rich in story as you play as Lina, a ‘neo cab’ driver in a futuristic world picking up people and driving them to their destinations trying desperately to keep her quota and, most importantly, get as high a rating as possible.

With rideshare companies like Uber and Lyft as popular as they are in today’s modern world, Neo Cab doesn’t seem too out of the realm of possibility, giving players a glimpse into experiences that drivers deal with on a daily basis.

Neo Cab is set in a future where technology has taken over the everyday lives of human beings. Taxi drivers have been replaced by automated or robot-driven cars. There’s even a chance that human-driven cars could be voted out. The world is all about full technological automation. Even the people themselves wear what are called ‘fieldgrids’, a device that tracks emotions like an advanced mood ring – in Neo Cab‘s world you don’t even have to talk to people to find out how they’re feeling. The more you play, the more you’re able to see just how far technology has come – and you’ll have to decide for yourself whether or not it’s a good thing. 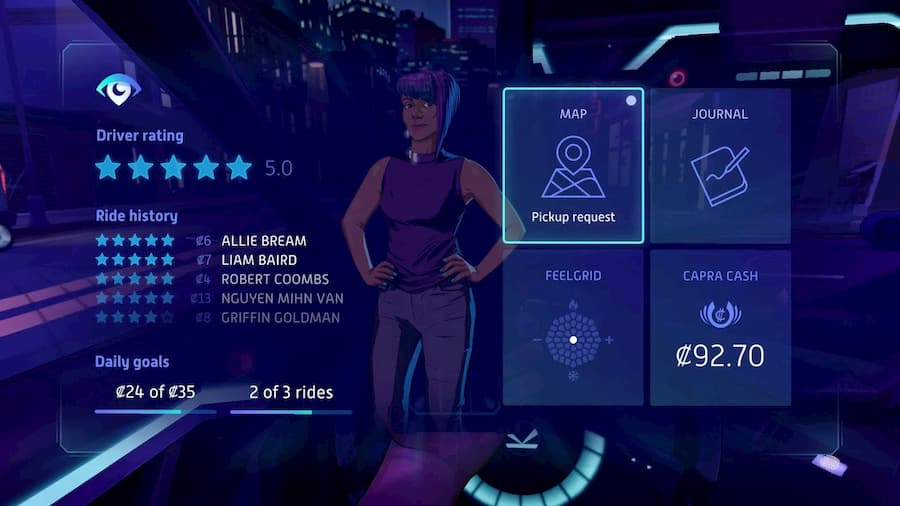 That’s the biggest part of Neo Cab: making choices. You’ll spend the majority of your time in Lina’s cab, picking up riders and driving them to their designated destination. But what kind of cabby would you be if you didn’t try to make a little small talk? The goal of your ride is to make a few bucks as well as get a high rating once the passenger leaves your car.

Neo Cab – the company you work for – requires you to keep a steady four star rating so you have to be careful what you say or risk getting a low score. You’ll have a choice between two or three responses to each of the questions that your passengers give you. Say one wrong thing and your score can easily drop from five to three – and with that fieldgrid on your wrist, your passengers will know if you’re lying. 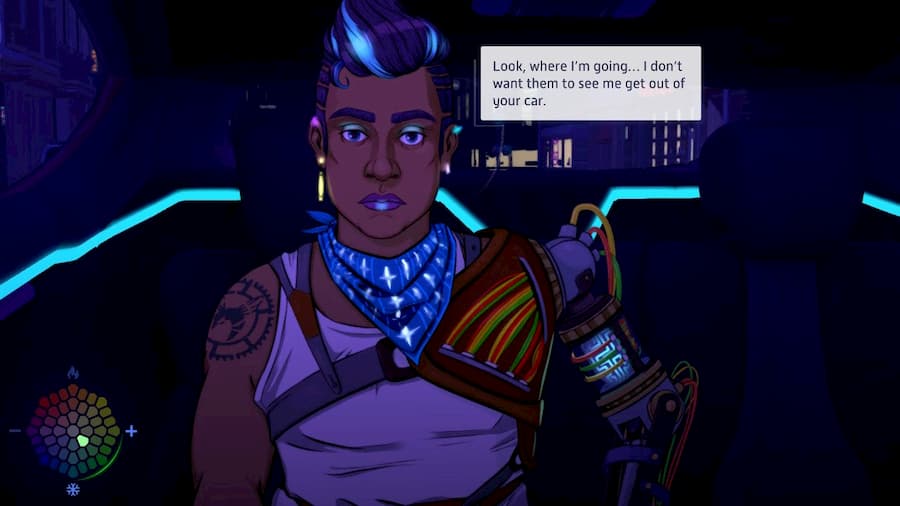 Your mood can even determine which answers you can and can’t say. If you’re frustrated while talking to a passenger, a ‘calm’ option might not be available to you. It’s an intriguing way to encourage players to keep a cool head; if you snap at someone, it’s not realistic to go back to being sweet and helpful only a few seconds later. That said, not being able to pick the answer that you really want to pick does get frustrating at the best of times, and can cause the difference between a five and four star review.

At one particular point in Neo Cab, I was driving around two German men who were sure that I was a robot. They asked me to take a test that would prove if I was human or not. The entire situation was frustrating and annoying, so I picked a few angry answers. Then, when it came time to wind down my anger and let them leave the car, many of the dialogue choices weren’t available for me to pick. (In the end they gave me five stars anyway for being a “marvel of modern engineering. Guess they still didn’t believe me when I swore I was human.) 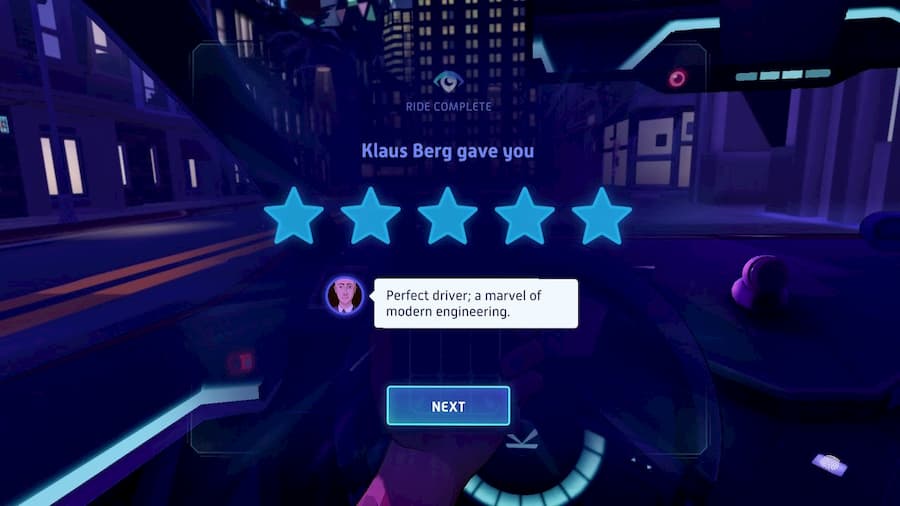 Neo Cab isn’t just about talking to your passengers, however. Outside of work, Lina has a whole new life she’s starting in the town of Los Ojos. She moves there to live with her best friend, but on the first night in town she goes missing. Starting out with only a few bucks in your pocket, all you can do is keep picking up fares, hoping to get some information on the whereabouts of your friend. You also need to keep track of your car’s fuel levels, filling up in between jobs, and finding affordable hotels to spend the night in when you can.

The game’s art style is absolutely gorgeous; there’s a distinct Blade Runner kind of futuristic vibe to everything. The colours are vibrant, and both the city of Los Ojos and the characters themselves are doused in neon hues. Dialogue is realistic, intriguing and very engaging. There’s no voice acting which is a shame; it did become a little inconvenient when I couldn’t look away for even one second for fear of missing something.

Neo Cab is a captivating story-driven game that gives a glimpse at what a world practically run by robots might look like. With a wonderful art style, a fascinating setting and a story that’ll instantly grab you, it’s well worth taking a ride with.

Neo Cab is available on PC, Switch and Apple Arcade. We reviewed the Switch version.