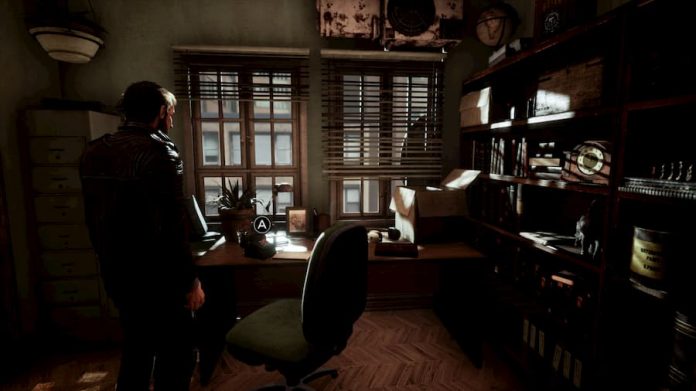 “If at first you don’t succeed, die, die again.” That’s the message of most survival horror games, but Song of Horror robs you of that luxury.

This third-person survival horror game gives you a mere four characters per episode; each character can pick up where the last one left off, but if they all meet their end, you’re forced to replay the whole chapter from the beginning. As irritating as this might sound, and occasionally is, Song of Horror’s permadeath cranks up the tension to sanity-threatening levels.

No longer are you bounding into rooms, safe in the knowledge that you can try again if some shambling behemoth tears your head off before you can blink. When Song of Horror Episode 1’s formless monster slams against a door, you frantically hammer the controller because if you don’t keep that door shut, it’s the end of you. Developer Protocol Games boasts that Song of Horror features “an unpredictable, eldritch AI that reacts to your way of playing”; what this basically means is that the game keeps you on your toes by throwing in minor jump scares.

Every time you hear a noise, you shudder at the prospect of the monstrosity returning, even it turns out to be an old radio sparking to life. It’s a mercy that your light source never runs out when you’re exploring the game’s gloomy mansion, or the second chapter’s dingy antique shop; Song of Horror is so unsettling that fumbling around in the pitch dark would send me over the edge. Even when you manage to get the conservatively-placed lights on, the mansion still oozes menace. In truth, it only feels like the monster’s constantly breathing down your neck; you can go for half an hour without seeing it. It supposedly tracks you by sound – though I suspect that, as was the case with Left 4 Dead‘s AI, it eventually decides you’ve had enough of a break and, hey presto, you’re running for your life. 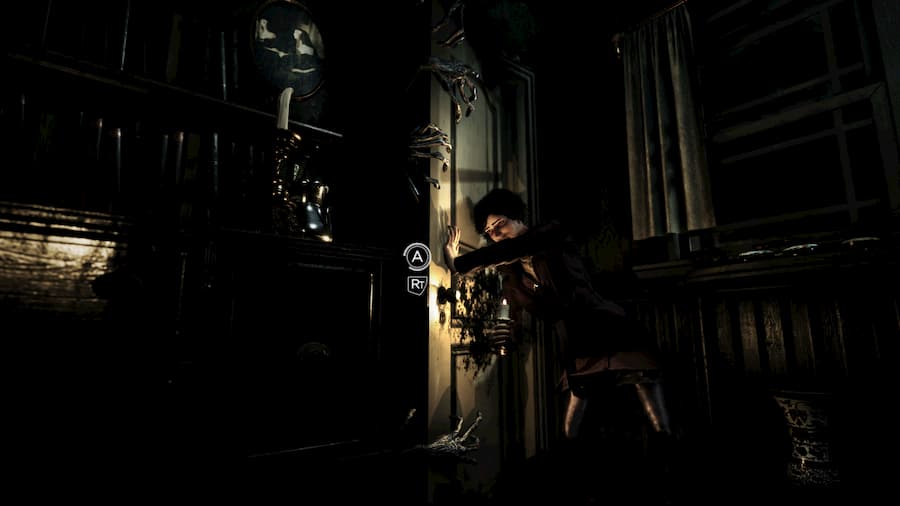 Each of Song of Horror‘s characters has their own reasons for stepping into the story, which resolves around a cursed music box. Sadly, Song of Horror is a little lacking in emotional payoff; it may be that, since the game’s fifth and final episode won’t drop till March 2020, there’ll be a heart-wrenching ending that takes into account which characters lived and which died. But so far, Alexander seems relatively unconcerned that his wife has probably been devoured by a supernatural entity. Likewise, Daniel either didn’t know or didn’t care that his ex-wife (who he was on good terms with) had met her end in the house.

What really drives you to engage with Song of Horror, rather than any emotional ties to the character, is the relief and faint sense of smugness you get from surviving long enough to solve the game’s pleasingly engaging puzzles. Song of Horror makes you feel like you’re in a horror movie, but the permadeath system forces you actually use your brains. 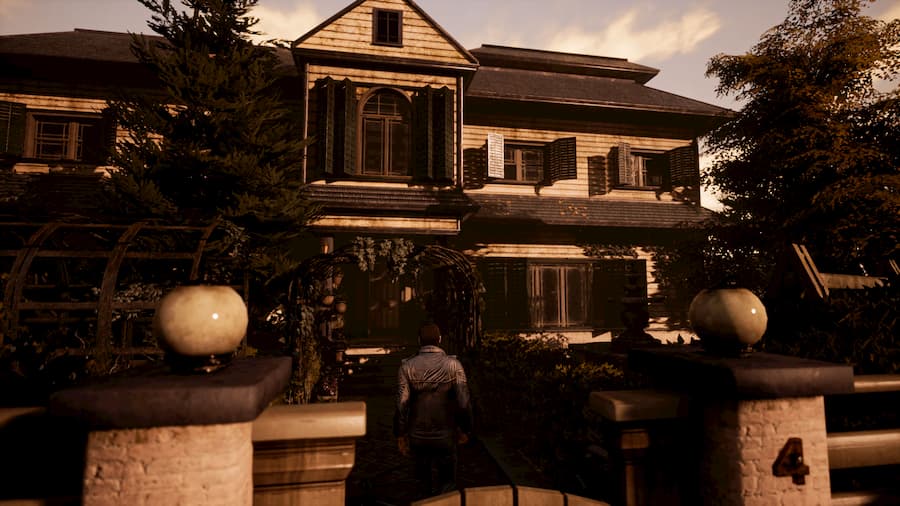 Here’s a quick quiz. You’re in a gloomy mansion, with no living soul in sight, when you hear sobbing coming from behind a door. Do you: (a) open the door and, upon seeing a figured hunched in the corner, advance towards them, hand outstretched, or (b) step away from the door and make a mental note never to open it?

Most horror-movie protagonists would choose option (a) while you, the viewer, shouted at the screen, berating them for being so stupid. Song of Horror allows you to listen at doors to determine whether or not there’s a threat, either from the game’s main monster or from some other looming entity. It took me a while to get used to this; I managed to get two characters killed because I opened the door anyway – but not being forced to make stupid, scripted decisions feels wonderful. 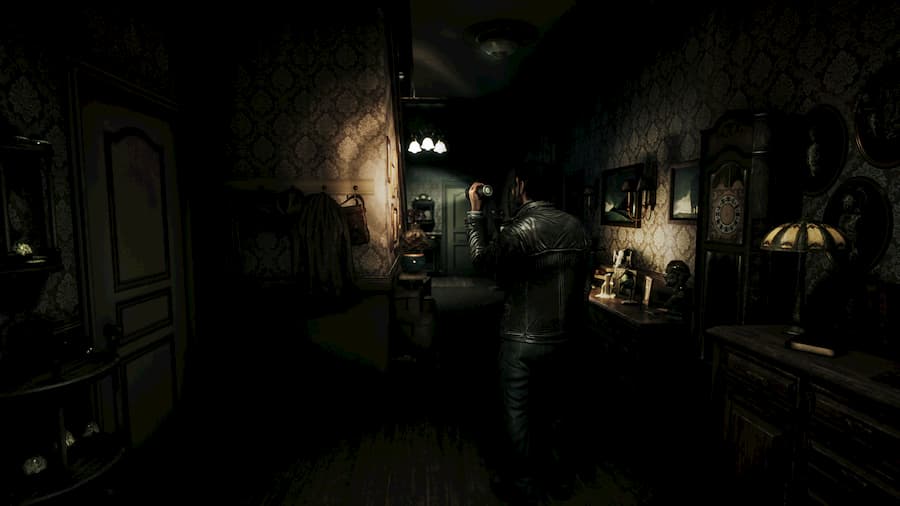 The game adopts a similar approach to the original Resident Evil with camera angles that are relatively static. Since you’re fleeing rather than fighting, you don’t have to worry about being attacked by an enemy that’s out of view. Song of Horror also pulls off some rather sneaky camera tricks; it regularly sets the camera behind an object or statue so it makes you look you’re being observed.

I’d recommend playing Song of Horror on a lower difficulty because it makes the quick-time events – which can spell the permanent demise of your character – easier. It make sense that you die because you didn’t check if there was a monster shambling about in a room, but meeting your end because you didn’t press a button in the correct rhythm is less palatable. Unlike Man of Medan, Song of Horror doesn’t cater for people with physical impairments so if you have difficulty hammering a controller button, you’re at a serious disadvantage here. 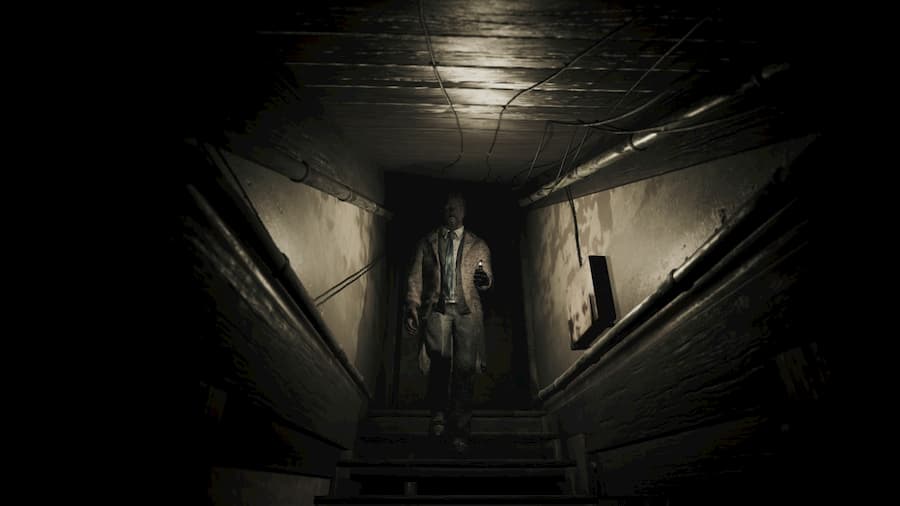 Accessibility issues aside, Song of Horror‘s limited camera angles sometimes work against the game. When you’re being pursued by the monster, you need to run and find a safe place to hide. So you dash down the corridor, knowing that a cupboard is just round the corner, at which point the camera angle changes and you’re disorientated enough that the monster catches up. Song of Horror‘s third-person view gives it a more cinematic feel but, during pursuits, I found myself wishing that the game would switch to first-person. This is less of an issue in the second episode, which gives the game’s “presence” a disturbing new form, which needs to be tackled in a different way.

If Song of Horror’s remaining episodes can maintain the level of quality set out in its first two episodes, survival horror fans are in for a treat. The permadeath mechanic may be off-putting to some but it’s purposeful and it pays off, forcing you to be more cautious adds to the game’s immersion. These two first chapters set up a strong story and, while I’d hope the characters get more resolution, I’m looking forward to seeing how this tale unfolds. Thus far, Song of Horror is a tense, chilling horror outing that deserves to be experienced by any serious horror fan.

Song of Horror is available on PC.