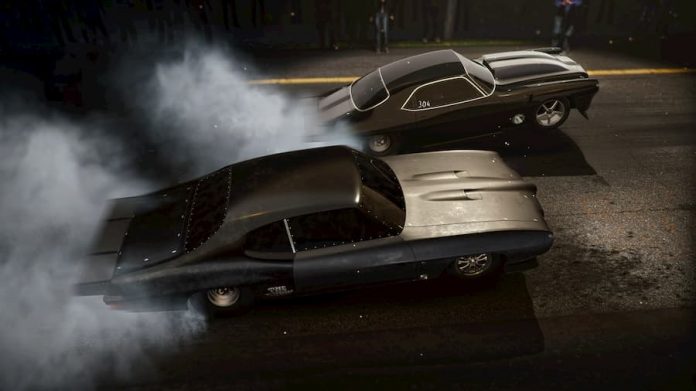 Games based on Discovery Channel TV shows aren’t anything new, and they’ve all pretty much been awful. I’m an optimistic person though, and so I was hoping that Street Outlaws: The List might buck the trend.

Now on its 14th season, Street Outlaws is a long-running American reality television show that lets viewers take a peek inside the street racing scene. But you don’t need to have watched it to make sense of Street Outlaws: The List. It’s a show about souping up cars and driving them fast, and that’s what you do in the game. If you haven’t watched the show at all, you’ll just be more annoyed by the occasional chatter that pops us as you peruse menus and race.

As a newcomer, your aim in Street Outlaws: The List is to prove yourself as a Street Outlaw by… not really racing on many streets at all. For the most part you’re driving around makeshift tracks in car parks and airway runways and the like. And when you do race on roads they’re presumably closed off as you never encounter any traffic. Regardless, you need to make your way through multiple seasons, each split into episodes, and each episode has five events for you to complete. Eventually you hit the list, and from there it’s all about taking on the big boys. Needless to say, by the end of the game you’ll have competed in more head-to-head drag races than you can care to count, as well as many checkpoint, bullseye and destruction events.

You’re not completing events just for merriment, either. Money and experience is awarded for every event you complete in Street Outlaws: The List. While in many cases it’s just a case of winning or losing, some events grade your performance, too, meaning you might want to retry them to get the big bucks and max experience possible. Levelling up unlocks new vehicles for you to take out for a spin, as well as cosmetic modifications and other goodies. New cars and parts can occasionally be unlocked by completing challenges as well. None of Street Outlaws: The List‘s cars or parts are officially licensed, however. The car you’re driving may look familiar, but you can be sure as hell that it has a daft made-up name. 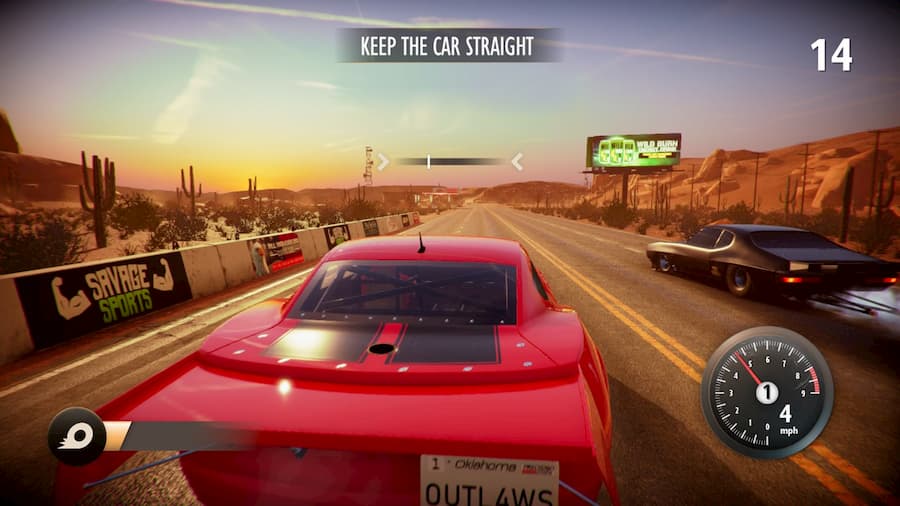 Any money that you earn can be used to buy upgrades for your vehicles and maintain them. And for better or worse, any upgrades that you buy are shared across all of the cars you have unlocked. Look on the plus side: at least it means you don’t have to grind to earn money to afford parts for another car when you decide to switch, right? Not all upgrades have to be paid for, though; a trip to the junkyard is seemingly always guaranteed to end with a free part being offered, as well as a couple of used parts at reduced prices. But new stock can only be perused every couple of in-game days.

And so you should get the idea. Street Outlaws: The List follows the tried-and-tested template of obtaining a car, completing events, upgrading a car, and then completing more events. And it carries on and on until you’ve proven yourself to be the best. Because you always have to be the best, don’t you? Being second best just doesn’t have the same ring to it. 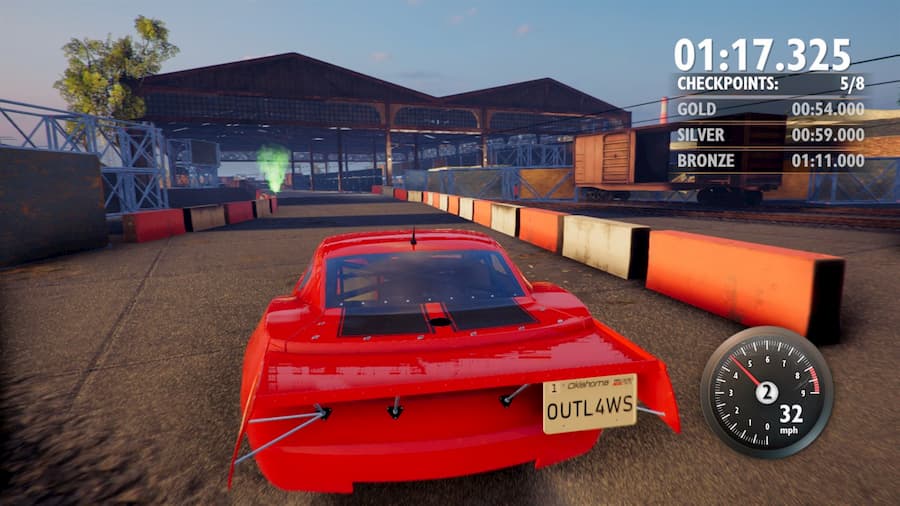 In terms of presentation, Street Outlaws: The List occasionally looks nice, but it’s mostly unimpressive. Thanks to the cars being unlicensed, the game can have a bit more fun with them, but there’s no destruction on offer. Most of the tracks are as dull as dishwater as well, and on Xbox One X there’s a fair bit of screen tearing. The game’s soundtrack is also very forgettable, and the audio mix is poor at times. Sometimes the inane nonsense imparted to you by the show’s cast is loud, much like their personalities. Other times it’s barely audible over the music.

Street Outlaw: The List‘s biggest problem is that its handling is poor. Some cars are overly twitchy, others turns like tanks. Actually keeping your car in a straight line can be a task. You’ll find that the physics are poor, too. Overall there’s just no feel to the action. You don’t feel like you’re driving a vehicle with four wheels that are connected to the road. It’s lifeless. The game doesn’t remember your camera setting, either. You start every event in chase view, meaning you have to hammer the shoulder button multiple times like a madman if, like me, you prefer the bumper view. 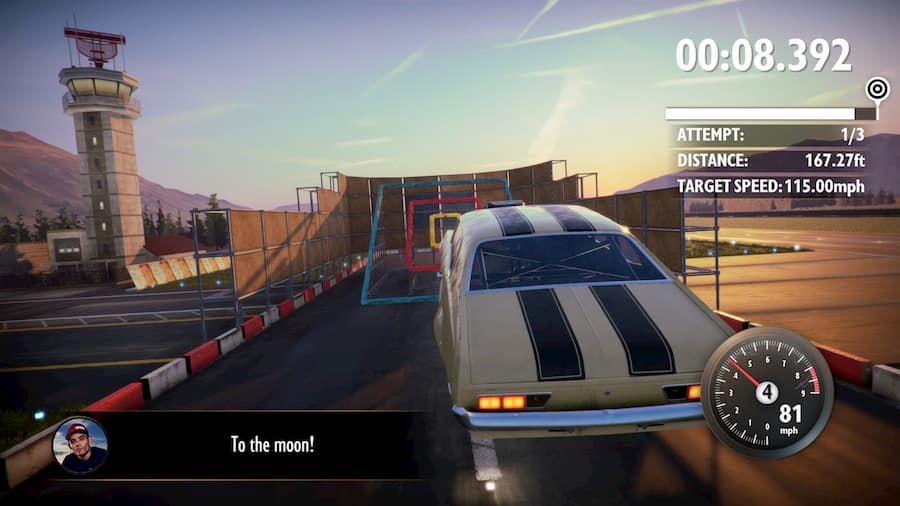 Drag races are the highlight of Street Outlaws: The List, but the problematic handling even ruins them. There are three stages to each drag event: first you must perform a burnout, heating up your tires to maximise grip, then you get three bumps to nudge your car closer to the starting line, and then there’s the main event – the actual drag race. You’re in charge of changing gears to get the most out of your car, but with each gear change there’s the chance that your car is going to suddenly pull to the left or right. On bespoke drag strips with wide lanes it’s not much of an issue, but when racing on narrow roads you’ll curse how much your car suddenly veers off track or into your opponent’s lane. Thanks, rubbish handling.

Even if Street Outlaws: The List‘s handling wasn’t so terrible, I’m still not sure I’d be able to recommend it, though. Aside from a career mode which you’ll definitely be done within less than ten hours, quickplay is the only other mode on offer to further entertain you. Needless to say, it’s certainly not worth the asking price, even if you’re a fan of the show. Street Outlaws: The List might not be the worst racing game currently available, but it comes pretty close. Maybe pick it up when it’s in the bargain bin for a little amusement, but otherwise stay well clear. The only list Street Outlaws: The List deserves to be on is the list of games you should avoid like the plague.

Street Outlaws: The List is available on PS4 and Xbox One. We reviewed the Xbox One version.