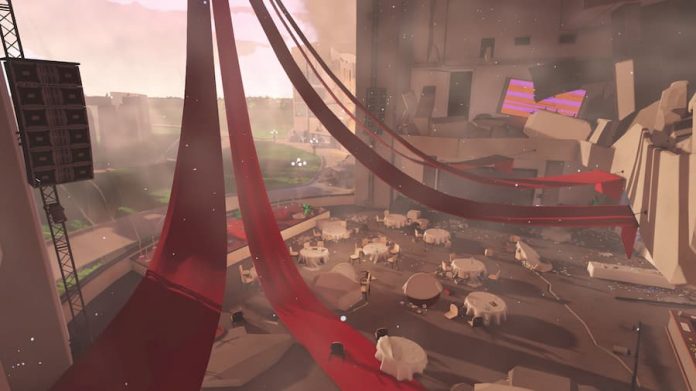 There’s been an explosion in a museum – and you need to escape.

The year is 2026. You’ve spent the afternoon at the Bradwell Stonehenge Museum, celebrating the summer solstice at its annual gala. But it hasn’t been all smiles and Pimms and lemonade; something has gone very wrong. There’s been an explosion. The futuristic building has gone into full security lockdown mode. Everyone else managed to escape, apart from you – and now, getting out is easier said than done.

That’s the opening plot of The Bradwell Conspiracy, a first-person puzzle-adventure game from A Brave Plan and Bossa Studios. In it, you play an unnamed character trapped in the museum. Your task is to safely escape the museum – but there’s much more to it than that. Along the way you’ll find out about Bradwell Electronics, and if the word “Conspiracy” in the title didn’t give it away, the company is not as innocent as its wonderful museum would have its visitors think.

There’s a strong narrative thread running through The Bradwell Conspiracy, and it’s hard not to be grabbed by it right from the beginning. As the game opens, your unnamed character wakes up, dazed and confused, with the ruins of a museum around them. There’s a guide’s voice helping them through the motions in their ear; it’s 2026, so a pair of smart glasses acts as the museum curator. Thankfully, it’s pretty well-versed in what to do in an emergency, so you’re led to your feet, and told to calmly make your way to the exit. 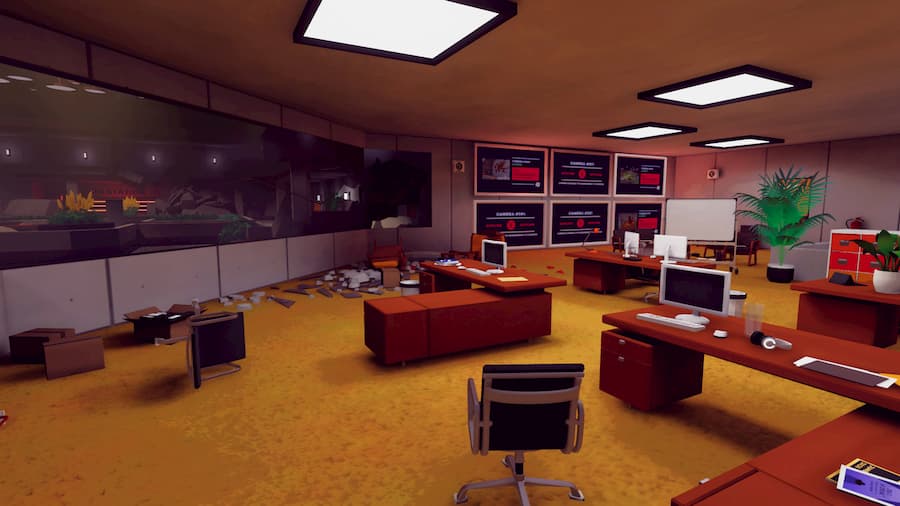 Except… the exit is closed off, and with the museum’s security system in lockdown, there’s no way to open it up. No problem; your guide directs you to the closest emergency exit. Climbing over and under a bit of rubble, you make it there safely – only to find that one’s closed too. Damn.

As it turns out, you’re not quite the only person left in the Bradwell Stonehenge Museum. Your smart glasses pick up a voice – an employee of Bradwell who’s also trapped, but in a different part of the building. Thankfully she’s got a bit more knowledge of the building than you, so she’s able to give you a bit of a helping hand. There’s only one problem: you inhaled some smoke during the explosion, so you’re unable to speak. In order to communicate with her, your only option is to use your smart glasses to take photos of your location. Hey, at least there’s an explanation for a silent protagonist for a change.

It’s not long until your attempted escape from the museum leads you into the employees-only section of Bradwell Electronics, and you get a glimpse of some of the technology the company is involved in. As it turns out, it has developed its own material known as Bradwellium – or simply “substance”. It’s matter than can be absorbed and reprinted at any time, using a Substance Mobile Printer. And as luck would have it, you manage to get your hands on one. 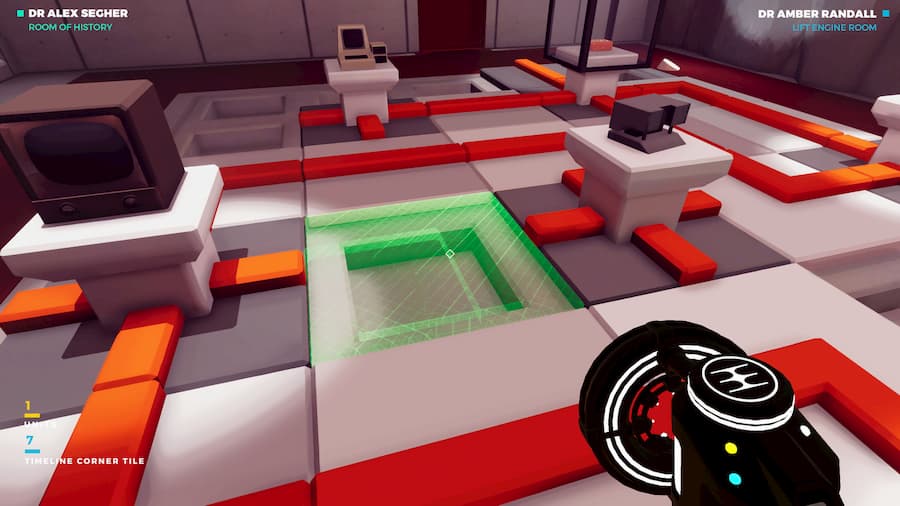 The Bradwell Conspiracy quickly turns from a mystery exploration game to a physics puzzle game. It’s very reminiscent of the likes of Portal. But unlike numerous other Portal clones that have been and gone in the last decade, it’s one that manages to carve out its own identity by creating an intriguing and captivating world that leaves you desperate to know more. Your Substance Mobile Printer – or SMP device – allows you to absorb items and their blueprints, to recreate them. Your only limit is the amount of substance you have. Cue environmental puzzles that require you to print boards in order to cross gaps, print pieces of piping to complete a drainage system, and print mirrors to direct lasers.

A fairly short experience, The Bradwell Conspiracy can be completed in around five or six hours, depending on how easily you figure out its puzzles. It’s never overly complex; the solution is generally right in front of you. The difficulty often comes in how to reach that solution. Luckily, Amber, the employee you’re connected to via your smart glasses, is there to offer a helping hand from time to time. You can snap a photo at any time by pressing the right shoulder button, and it’ll be sent directly to her. If it’s something related to the puzzle you’re trying to figure out, she’ll sometimes give you a helpful pointer. Sadly, you’ll probably hear her say “I don’t know what you’re trying to show me” or similar more times than not. 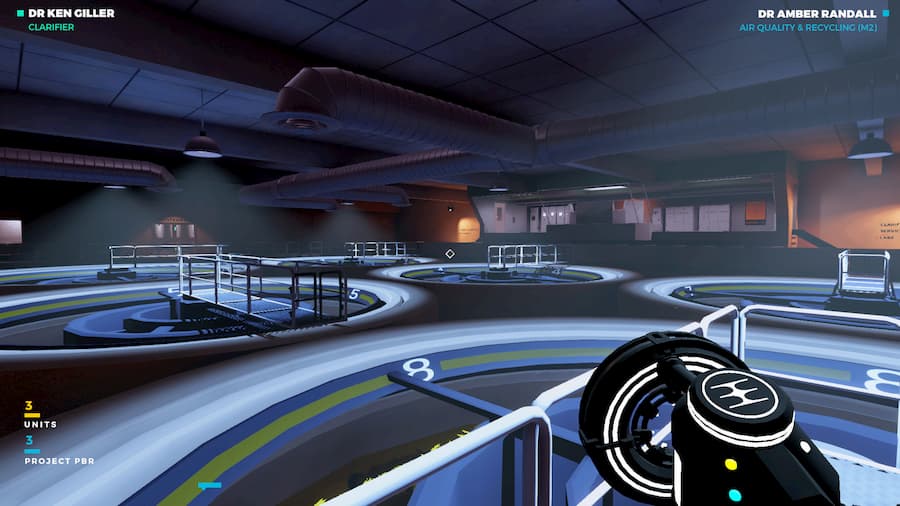 For the most part, the puzzles that The Bradwell Conspiracy throws at you are varied. Sure, you may have to use similar solutions time and time again – printing a board to cross a gap is one of the game’s absolute favourites – but the main meat of the puzzles keeps things fresh. Your SMP is the heart of the game, but you’ll also have to assist Amber with certain tasks too. In one particular section, she has control of bridges you need to cross. Taking a photo of one tells her which one to move. Communicating with her only through photos is a pain when it comes to needing a hint, but it’s a novel way to solve puzzles.

Sadly, the game has a few frustrations which stop it being quite as engrossing as it perhaps should have been. In order to use your SMP, it needs to be stocked up with substance. You’ll find this by absorbing certain items in the environment, or simply finding a chunk of substance. Most of it is out in the open, easy to find, but once or twice I found myself stuck with no substance to use. I had to backtrack and search cupboards and drawers in offices I’d already passed through in order to find some more. It broke up the flow of the game somewhat.

I’ve also come across a couple of glitches that involved me getting stuck in the environment and needing to reload the game. Annoyingly, if you quit in the middle of a puzzle you’ll often need to redo the whole thing, so losing a bit of progress thanks to a glitch is something of a bellyache. 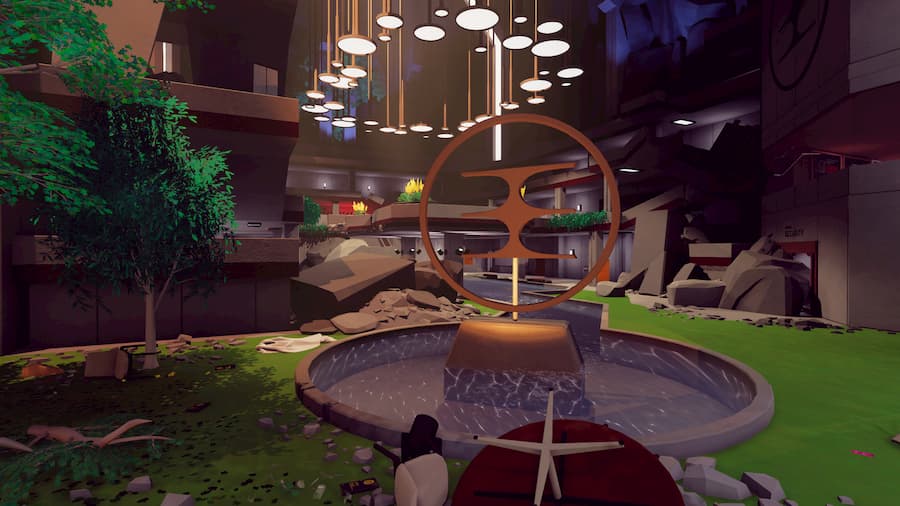 That’s not to say The Bradwell Conspiracy isn’t worth your time though. Odd glitches and bugbears aside, I’ve enjoyed my journey through Bradwell Electronics. The game’s narrative keeps you hooked as you want to find out exactly what’s going on. There’s also an impressive cast of voice actors on board. Amber is played by Rebecca LaChance, who does a brilliant job of injecting character into the faceless voice that accompanies your journey. There’s even a cameo by Jonathan Ross (!) in there too.

If you’ve enjoyed first-person puzzle games like Portal and The Talos Principle, then The Bradwell Conspiracy deserves a place on your radar. It isn’t perfect, but it oozes British charm, packs in some enjoyable puzzles, and manages to tell an interesting story at the same time. If you can forgive its few missteps, then its corridors are definitely worth exploring.

The Bradwell Conspiracy is available on PC, PS4, Xbox One, Switch and Apple Arcade. We reviewed the Xbox One version.