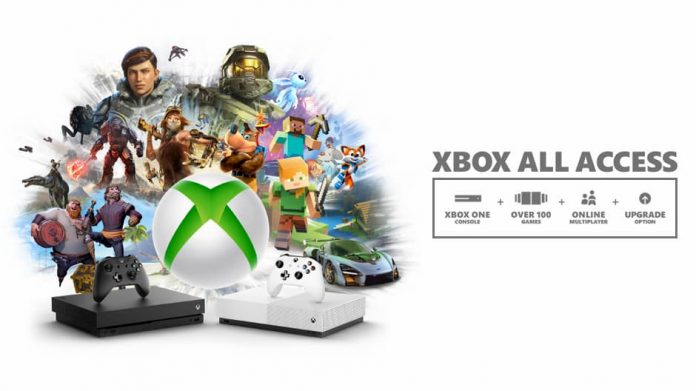 That service was only available in North America, and it ended in December 2018. But now it’s being reintroduced around the world, starting with the United States, UK and Australia.

Xbox All Access will start at £17.99/$19.99, giving users access to an Xbox One console and a membership to Xbox Game Pass Ultimate (which includes Gold and Game Pass for both PC and console).

If you choose to sign up to Xbox All Access, you’ll be able to choose between an Xbox One S, Xbox One S All-Digital or an Xbox One X console. The monthly price will vary depending on what console you choose, with the price of an X of course being a little more expensive. You’ll be tied into a 24-month contract, but your Game Pass Ultimate subscription lasts the full 24 months.

Subscribers who opt for an Xbox One X console are also given the option to upgrade to the next generation Xbox console, codenamed Project Scarlett, once it becomes available in ‘Holiday 2020’.

If you currently don’t have an Xbox One, or are looking for a budget-friendly way to upgrade to an Xbox One X, Xbox All Access is worth considering. Game Pass Ultimate alone costs £10.99 a month, so you’re getting an Xbox One console from as little as £7 a month. Over two years, that’s £168 – less than the RRP. So not only are you getting to spread the cost, you’re also saving money too.

As good a deal as it is, signing up for Xbox All Access does mean taking out a credit agreement. It’s set at 0% interest for 24 months, but if you fail to make any payments on time you’ll be liable to pay interest. Don’t enter into an agreement unless you’re sure you can continue to pay the monthly payments until the end of the contract.

You can find out more about Xbox All Access on Microsoft’s Xbox Wire blog.