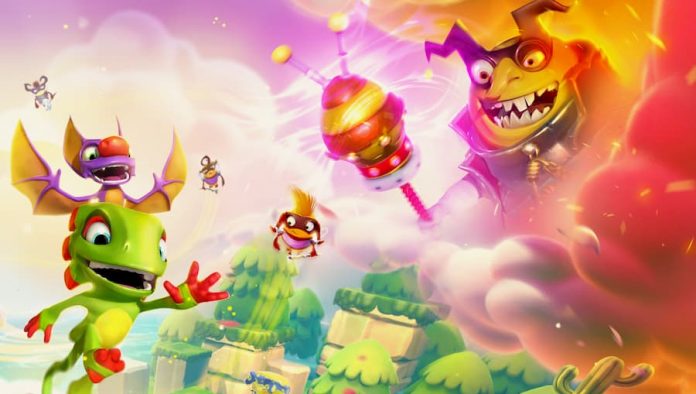 A duo of cute protagonists on a whimsical adventure through a colourful world? Count me right in.

We first met Yooka and Laylee back in 2017. Yooka-Laylee is a fully 3D platformer that sees the pair solve puzzles, defeat enemies and meet a myriad of fun (and sometimes inappropriate – I’m looking at you, Trowzer Snake) characters. In essence, its sequel Yooka-Laylee and the Impossible Lair is exactly the same. It has all of those things. But there’s one key difference: aside from the overworld, all of its levels are played in 2.5D. It massively affects how the game plays, and on the whole it’s absolutely for the better.

There are 20 individual levels to play through, but each one has a secondary state to play through, too. Essentially, that brings the level total up to 40. The remixed levels aren’t simply a gimmick, either; they’re cleverly implemented into the overworld design – you’ll often have to solve puzzles in order to unlock the secondary level – and for the most part offer a very different play experience. Perhaps a level will become flooded, turning it into an underwater level, or perhaps it’ll be windy, allowing you to use the environment in new ways. It never feels like you’re simply playing the same level twice.

The team at Playtonic’s shared history shines through in many areas of the game, which is a delight for anyone that played Rare games in the 90s. The cannon sequences, where Yooka and Laylee are shot from cannon to cannon, are ripped right out of Donkey Kong Country, for example. The placement of certain secret areas, methods of traversal and even some level’s music will take you back, too. That’s not to say that Yooka-Laylee and the Impossible Lair feels derivative; those influences are welcome, but this is very much its own adventure with its own personality. 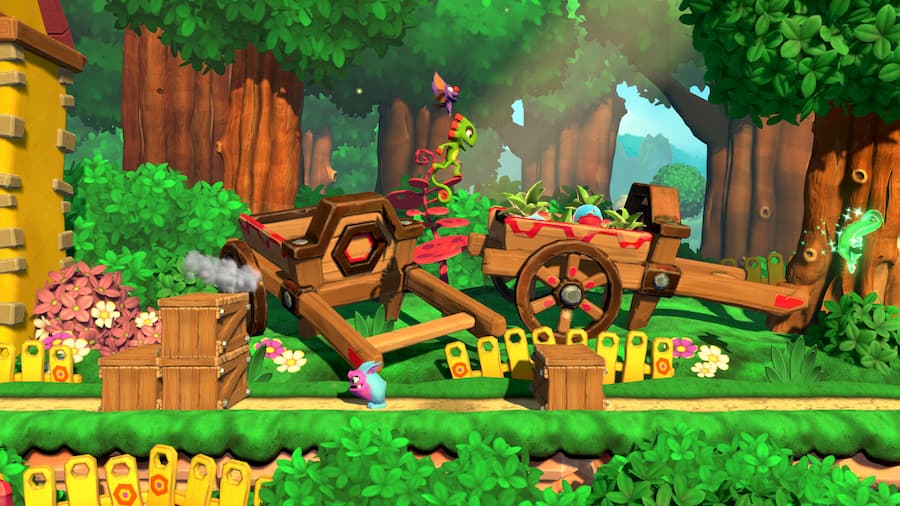 And personality is something it has in droves. For characters that speak no lines of dialogue, it’s impossible not to fall in love with the lizard and bat combo. I mean, look how cute they are! Secondary characters – faces familiar to anyone who played the first game – who you’ll meet in the overworld also ooze charm. Well, except maybe Trowzer who exists only to rinse you of coins you’ve collected in levels with its annoying but humorously implemented “paywalls”. In terms of graphics, it’s simply beautiful. The 2.5D environments of every level are bright, crisp and a delight to look at. It stands head and shoulders above the first game in terms of being eye-catching, I think.

The game’s main crux, however, is one that I have mixed feelings about. It’s both very cleverly implemented and endlessly frustrating. The titular Impossible Lair isn’t simply a naming device; it’s the focal point of the game. The antagonist of Yooka-Laylee and the Impossible Lair, Capital B, can only be defeated if you manage to complete his Impossible Lair. You can try it at any time, but by completing the game’s levels you’ll rescue bees which act as shields when you’re in the lair. With a few extra bees hiding in the overworld, there are 48 altogether, with each bee able to take one hit for you. 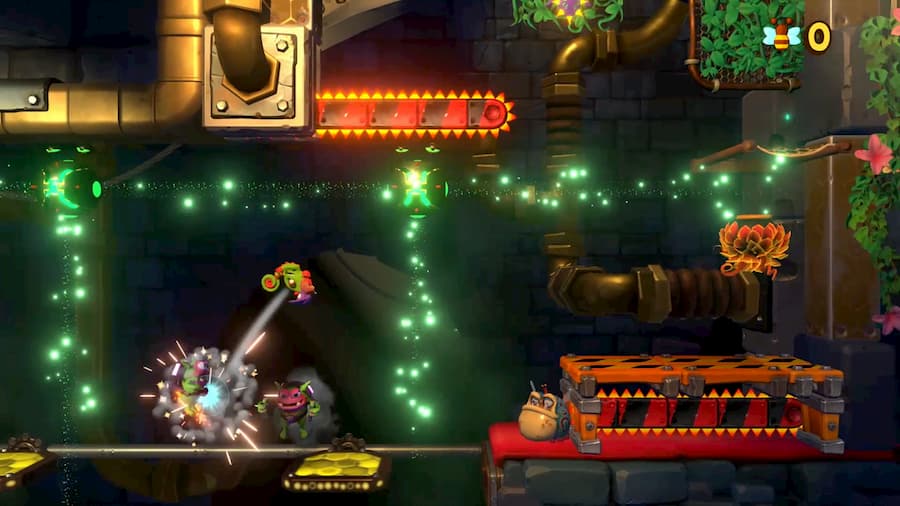 Now, being able to make 48 mistakes might sound like a cakewalk, but Playtonic has been very dastardly while designing the Impossible Lair. I’m fairly certain I’ll never get to the end of it, meaning I’ll never truly complete the game. That’s a frustrating fact; almost as frustrating as trying to complete the Impossible Lair itself. It’s long, split into sections, but the whole thing needs to be completed in one go. The more bees you collect, the better your chances, but those extra ‘lives’ really don’t go far. I’ve pissed away about 25 just in the first 15% of the level, and not just as a result of my own ineptitude. You don’t get any brief window of immunity when you take damage, even though you’ll lose control for a fraction of time. More often than not, one mistake will cost you at least two lives, making those 48 chances more like 24.

That being said, I can see the Impossible Lair being a YouTuber’s and speedrunner’s dream. Give it a few hours after release, and someone will have completed it with zero extra chances. That real sense of challenge is undoubtedly a thrill to many, and the fact you can attempt the level as many times as you like with no penalty is a boon. As they say, practice makes perfect. But only as long as you have the patience – and I’m not sure I do.

Even without that fiendish challenge though, Yooka-Laylee and the Impossible Lair has a surprising amount of content. Each of its levels is substantial, with replayability packed in thanks to the five TWIT coins hidden in each. The overworld itself has plenty of challenge, too. It’s pretty big, although it’ll unlock gradually as you pay Trowser those TWIT coins in order to open up a new area. You’ll need to solve puzzles to access new levels, and there are plenty of secrets to uncover along the way. 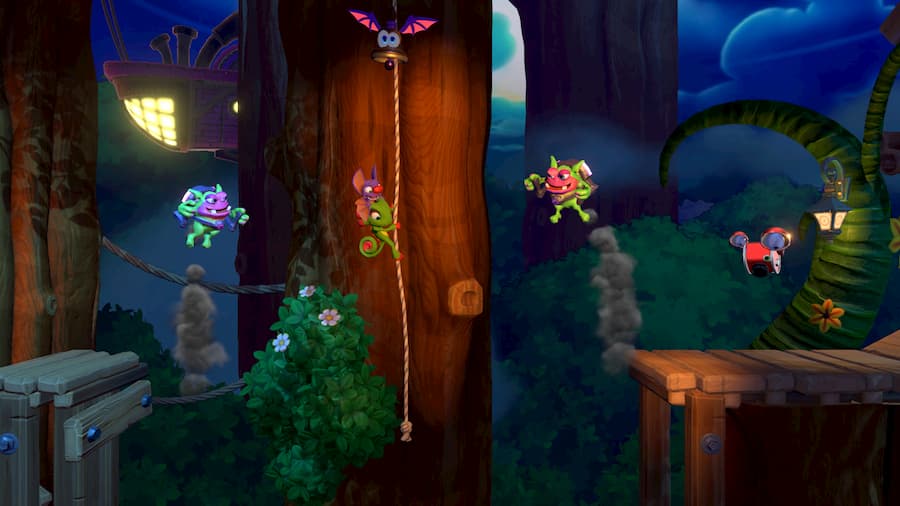 The overworld is also host to a large number of hidden tonics. Finding them will allow you to buy and equip them, and each one will affect your gameplay experience in a level somehow. Some are purely cosmetic – add a ‘film noir’ effect to your screen, for instance, or make Yooka’s head massive. Some will make the game a little harder, like inverting your controls, or making enemies tougher. Others make it a bit easier, like adding a couple of extra checkpoints. They’re mostly a gimmick, but they’re fun to play around with, and add another level of challenge/replayability to most levels. Simply collecting them all from the overworld offers a fun challenge in itself; even if you don’t want to use them, it’s worth hunting them out.

All of that is to say that Yooka-Laylee and the Impossible Lair packs in a lot of content and a large variety of things to do. Even without that last level, there’s a good 20+ hours of gameplay here, and for a budget title (its RRP is £25/$30), it’s an impressive amount of value.

I’ve had a lot of fun with Yooka-Laylee and the Impossible Lair. It’s challenging, humorous, beautifully designed and offers a surprising amount of variety. However you feel about the insurmountable challenge of its final level, there’s still plenty to enjoy outside of that. If you enjoy platforming games, you’ll find a lot to love here. And did I mention how cute Yooka and Laylee are?

Yooka-Laylee and the Impossible Lair is available on PC, PS4, Xbox One and Switch. We reviewed the Xbox One version.

Want to support GameSpew? Buy Yooka-Laylee and the Impossible Lair using our Amazon affiliate link. It won’t cost you anything extra, but we’ll get a small slice of the purchase.